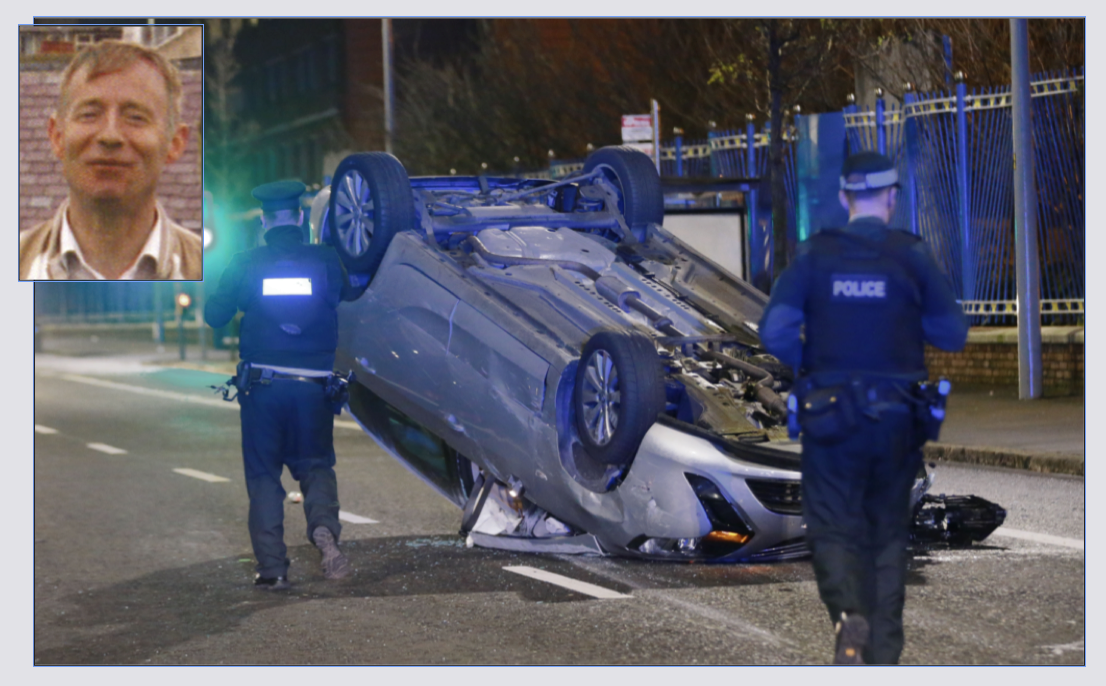 The overturned car on the Falls Road on Monday night; inset, Anthony McKeever who died at the same spot in 1993 after being hit by a stolen car

A child was among four people treated in hospital after a car careered into four parked vehicles and overturned on the Falls Road last night.

An eyewitness said it was a miracle no-one was killed when a silver Vauxhall Zafira careered into a number of other cars outside the Royal Victoria Hospital just before the Broadway junction. The car had earlier been taken from outside a house in Servia Street in a creeper burglary.

The incident brought back painful memories as it was at exactly the same spot that death-drivers killed Anthony McKeever in October 1993. The St Louise’s caretaker was making his way back to his Thames Street home when he was knocked down and killed by a notorious West Belfast criminal who has since died.

On Monday night three men exited the overturned vehicle after the multiple impacts and fled down the Falls, covering some distance, according to eyewitnesses, before taking a left up Cavendish Street.

Police at the scene of the collision wearing latex gloves were later seen to be examining mobile phones. It’s not known at this stage whether the phones belonged to victims or those in the overturned car, but it’s hoped that information can be retrieved from the phones identifying one or all of the fleeing men.

Speaking to Daily Belfast West Belfast MP Paul Maskey said: “Thank God no-one was killed. It is my understanding that this crash was down to death drivers following a creeper style burglary in Servia Street. “Death drivers are a scourge on our community. This is a bad news story for our area and we are very thankful that no-one was killed on Monday night. What we are seeing is repeat habitual offenders granted bail and allowed back on our roads – this has to stop before someone is fatally injured or killed.

“Myself and Fra McCann intend to meet with the Attorney General to discuss this matter further.”