Frampton back in camp ahead of ring return 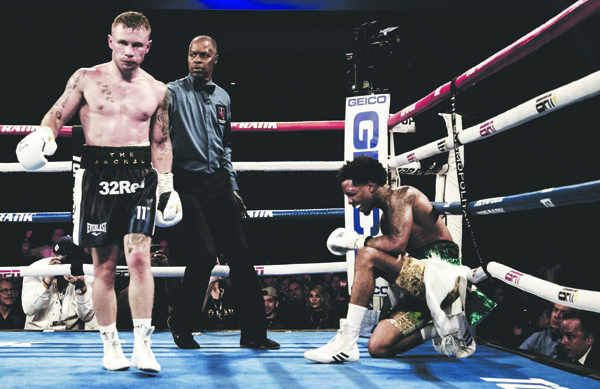 Frampton’s last outing was back in November when defeating Tyler McCreary in Las Vegas. ©INPHO/Stevie English

CARL Frampton could return to the ring as early as next month as ‘The Jackal’ returned to training in Manchester this week.

The North Belfast man was speaking on BBC 5 Live’s Costello and Bunce podcast earlier on Monday when he reported that he has been put on notice for a behind closed doors fight in late July or early August.

An opponent is yet to be confirmed, but it would be expected that it will be a tick-over fight ahead of what he hopes is a showdown with WBO super-featherweight champion Jamel Herring when various restrictions are eased that include travel and allowing fans back in arenas.

This particular fight will almost certainly take place at BT Sport studios but will play out in a rather surreal atmosphere given only team members and officials will be present, yet Frampton will have some inkling of what to expect having boxed in front of small crowds during his amateur career.

“I have been told to get ready for the end of July or early August,” he confirmed.

“I haven’t had a concrete date yet or an opponent.

“That’s all I really know at the minute so I had to make my way across as I can’t do a proper training camp in the garage on my own so I needed to be here (Manchester) with Jamie Moore and Nigel Travis.

“It’s going to be strange and an alien feeling not having anyone there. I suppose you spar in front of not many people when you’re trying to put one over the sparring partner.

“I boxed at a reasonably high level as an amateur when you were travelling the world and not fighting in front of many, so it’s something I’m half-used to.”

American promotional giant, Top Rank, will return this Tuesday with the first of behind close doors events in the MGM Grand Conference Centre Grand Ballroom, Las Vegas with former featherweight champion Shakur Stevenson taking on Puerto Rico’s Felix Caraballo in a 10-round bout up at his new weight of super-featherweight, while Thursday will see Jessie Magdaleno face Dominican puncher Yenifel Vicente at feather.

ESPN will screen these events live and their plans for the broadcast may offer some clues with the commentary done from a studio away from the event and the punditry from home via video call.

That would be a relief to Frampton who joked that the booming voice of Steve Bunce at ringside with no background noise could be a little off-putting.

“I remember one of my early fights when there weren’t many people in, Jim watt was commentating and I wasn’t happy with what he was saying, but I didn’t say anything.”

With no flights between Belfast and Manchester at present, Frampton was forced to take the overnight ferry to Liverpool to join up with his training team and the fact that travel is still greatly disrupted with quarantine also a factor for those arriving from outside means that the identity of an opponent could be narrowed down as it is unlikely to be someone from far afield.

That issue is the reason why his bid to challenge Herring in his quest to be a three-weight champion has been put back with both men involved in these tick-over bouts as they wait for the green light.

However, should both come through, that title fight could be next for both.

“That’s still the fight and the one I want,” he reiterated.

“He’s fighting a guy, Jonathan Oquendo, which is a safe enough fight. If we both win our next fights then I’m pretty sure it will go ahead. Where and when it will be I don’t know, be he seems keen and keeps mentioning my name.

“I want the fight and the chance to be a three-weight champion but it’s one fight at a time now although h I feel like the fight with Jamel will happen at some point.”

Frampton hasn’t boxed since the end of November when fighting through the pain barrier to overcome Tyler McCreary in Las Vegas.

He entered that fight with his left hand rebroken in sparring from the freak accident in Philadelphia earlier in the year but broke his right in the seventh round with both requiring surgery.

While lockdown has allowed those hands further time to strengthen, he reports that they have held up well to pushing the heavy bag so far and is raring to get stuck into camp.

“I feel like before lockdown kicked in my hands were ok,” he stressed.

“The doctor was happy with how the operations went; I had been hitting the bags and my hands felt ok so I don’t think I needed this break as they were good to go, but I suppose it won’t hurt having this extra time off.

“I’m upping things now though and have been picking things up over the last few weeks.”