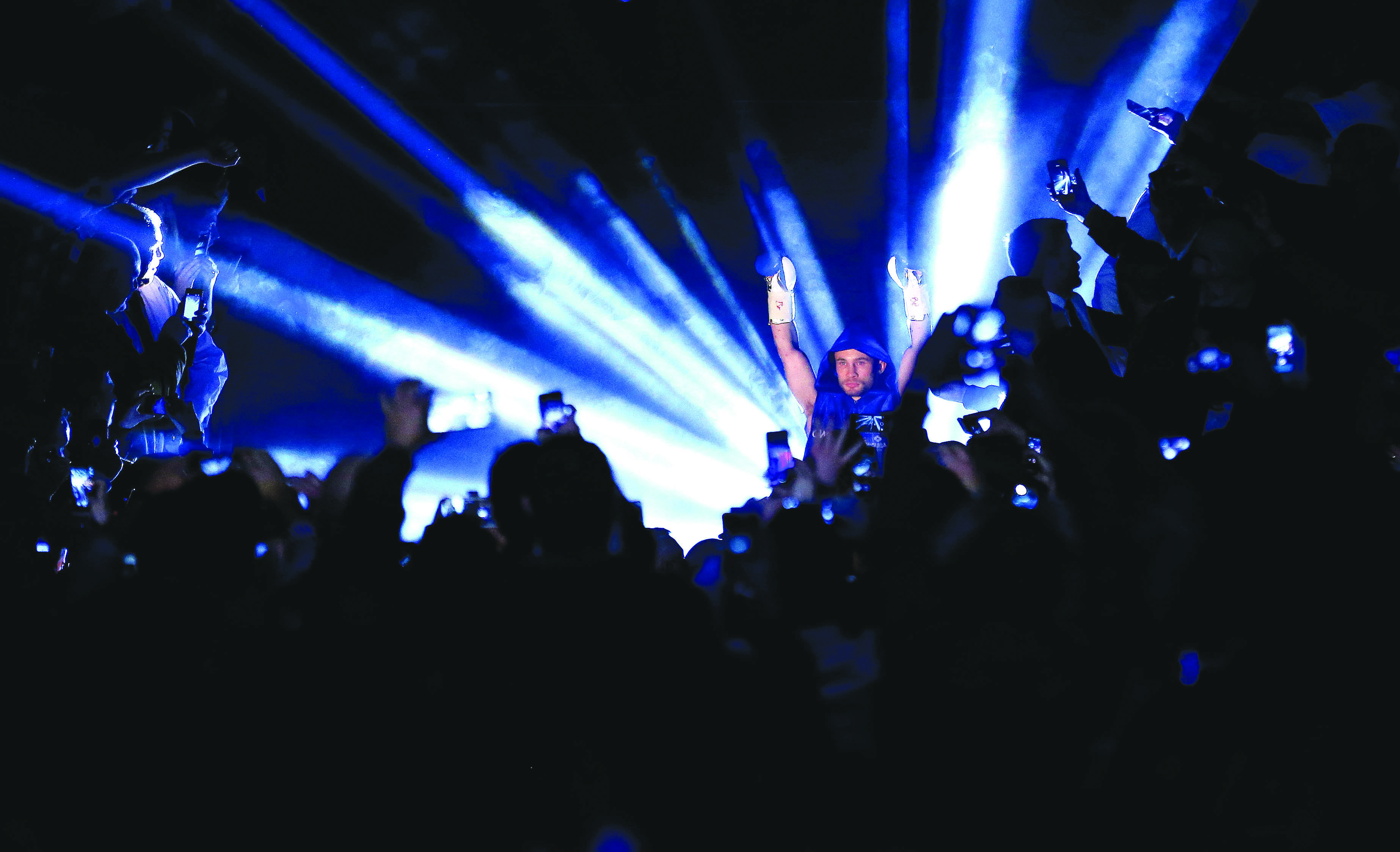 Carl Frampton makes his entrance ahead of his IBF title defence against Chris Avalos last year. ‘The Jackal’ says Scott Quigg has not been under anything like the same pressure ahead of their meeting next week

CARL Frampton has told Scott Quigg and his team to ‘catch themselves on’ if they believe their man is the main draw ahead of next Saturday’s super-bantamweight world unification bout at the Manchester Arena.

Frampton’s huge and vocal support is well noted with the North Belfast man’s fans expected to arrive en masse in the English city next weekend and are likely to outnumber that of Quigg’s even though he hails from nearby Bury.

While the WBA champion has appeared at the Manchester Arena on several occasions including last time out when stopping Kiko Martinez in two rounds, Frampton says his rival will not have experienced an atmosphere and occasion of such magnitude as he will encounter next weekend.

“It’s going to be something he is not used to,” said IBF champion, Frampton who has grown accustomed to high-pressure situations and huge expectation in his career with his recent fights becoming major events in Belfast.

“That just proves he doesn’t sell tickets. “I know in the grand scheme of things on fight night, it’s not really important who sells the tickets, but if they are trying to claim he is the ‘A-side’, they need to catch themselves on.”

Frampton and Quigg have been compared for a number of years now, with fight fans craving this match-up that has finally been delivered. There had been a number of efforts in the past to make this fight including from Quigg’s promoter, Eddie Hearn who famously produced a cheque for £1.5million live on Sky Sports in an effort to provoke a reaction from ‘The Jackal’ and his team.

However, Frampton says this was little more than a stunt and that Hearn’s only chance to propel Quigg into the limelight has been off the back of his popularity.

“They are trying to make a name for Scott Quigg off the back of me and link him to me at every opportunity,” insisted Frampton.

“The guy doesn’t have much of a personality, he’s a bit boring. Eddie’s hemorrhaging money on him and he’s trying to get it back in some way so they have linked him with me at every opportunity.

“That bullshit £1.5m cheque…..I’ll make a lot more money this way although it’s not all about the money. “Still, I didn’t want to be lining the pockets of Eddie Hearn and Scott Quigg for them to walk away with more than me.”

Both men look certain to make considerably more for next weekend’s match-up than what was on offer from Hearn last year given the huge interest and expected massive pay-per-view audience on top of a packed-out arena. The hype and excitement for this fight is now in overdrive with Sky’s

‘The Gloves are Off’ show on Sunday evening only adding to the build-up. Frampton laughed off some quite bizarre claims from Quigg on that show as the Englishman tried to get under his skin by claiming it was he who is the fan favourite, but the show certainly added to the excitement as fans count down the minutes until the opening bell.

“Sky have already hyped Scott to the point where people think he is going to beat me and they will do the same here,” accepted a relaxed Frampton. “But I know that my best beats his and I intend to prove it on the night.”