Frampton has Gut the tools to bounce back in style 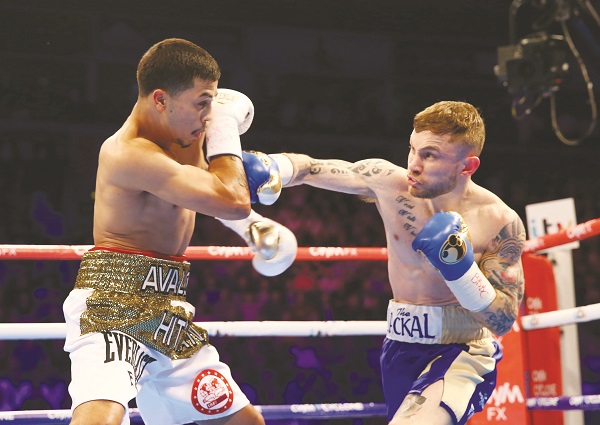 Frampton’s last stoppage win came against Chris Avalos in February 2015, his last appearance at the SSE - then Odyssey - Arena
IT has been almost two and a half years since Carl Frampton marched to the ring at the SSE – then Odyssey – Arena, but on Saturday night ‘The Jackal’ returns to his spiritual home aiming to banish the memory of his WBA featherweight title loss to Leo Santa Cruz in Las Vegas back in January and put himself right back into the world title mix.

Standing in the opposite corner for this WBC title eliminator is Mexico’s Andres Gutierrez who has amassed a record of 35-1-1 despite being just 24 years-old.

It is a fight Frampton must win and one he should do.

That’s not to say ‘Jaguarcito’ is simply a live body for Frampton’s return to his home city as the Guadalajaran has the attributes to make it an uncomfortable night for ‘The Jackal’. But he is entering shark-infested waters with a baying Belfast crowd and an opponent who is determined to prove that Santa Cruz defeat was simply a bad night at the office having beaten the same man exactly one year ago this weekend.

“A lot of people may have taken an easy touch, but I didn’t want to take advantage of the support to come over here and get a knockover job,” insists the 30 year-old North Belfast man.

“I wanted a good fighter, a fight I can get up for mentally and to prepare for as well.

“I think I need to be switched on the whole way through it, need to be in good shape.

“What I have been doing in training has been trying different little things out.

“I was kinda getting involved in fights too much in the previous two fights (against Santa Cruz), even in sparring. I was trying to out-muscle and overwhelm guys.

“I can out-box people when I want to as well so that’s what I’m focussing on here.”

Certainly, another below par performance could see Frampton struggle, yet it must be remembered that Santa Cruz is a much tougher test than Gutierrez and Frampton was within a whisker of holding onto his title despite being off colour at the MGM Grand.

That night, the Tigers Bay man seemed too focussed on landing the left hook that shook Santa Cruz in their first meeting with the Mexican changing his tactics to box rather than brawl and this double bluff seemed to throw Frampton off in the opening stages.

Gutierrez in many ways is a typical, come-forward Mexican who likes to press the action and has a fine left to the body and the ability to punish mistakes.

When both men came face-to-face at the press conference to announce this fight back in May, it was noticeable just how stocky the visitor was and that ought to translate into durability.

Yet his approach work can be a little laboured and punch output much lower to that of a Santa Cruz, although not many in world boxing throw as frequently as ‘El Terremoto’.

“He is a puncher, aggressive, good tight defence,” notes Frampton.

“He is game, brave. I saw him getting dropped by a guy (Mario Antonio Macias) in 2014, almost poleaxed in the second round, but he got up and won the fight by a unanimous decision.

“I think he should be unbeaten. He beat Cristian Mijares (in my opinion). If you watch that fight back it wasn’t even that close. He can fight, so I’ll need to be on my game.”

Back at in the ‘Jackal’s Den’, it is hard to fathom how Frampton won’t be on his game as this has been the scene of some of his most seminal nights.

The Kiko Martinez win for the European title sicks out, but so too does the Chris Avalos beat-down – the last time he boxed in the arena.

Following that IBF super-bantamweight title defence, there have been four tough fights on the road, the first of which came in El Paso to the late Alejandro Gonzalez Jnr when he was dropped twice before adjusting and going on to win comfortably on the scorecards.

Ironically, Gutierrez could have been the opponent on that Texas afternoon having been initially offered the fight, but the Mexican feels now is the perfect time to take the scalp of the two-weight world champion.

“I knew about the fight,” Gutierrez said of that potential meeting.

“I didn’t think it was the time then, but now I’m ready to fight him and I’m going to give my best.

“As soon as I found out about this fight with Frampton I agreed right away as this is the opportunity I have been looking for so many years.

“I’m ready for the fight. I know a lot of people think that I’m very young for this, but I’m always looking forward to putting on a show and I’m going to show everyone what I’m made of.

“Frampton has a really good left and he likes to punch hard with his left hand. I’m going to use my own style. My style is to go forward and throw really good punches. This is the perfect moment for us to face each other.”

A refocussed Frampton perhaps is not the perfect time for Gutierrez.

In fact, Frampton and his team had hoped to secure a title fight for his Belfast return, but a combination of  reasons including a lack of pay-per-view, Windsor Park’s unavailability and the general reluctance of many boxers to travel to face him in his back yard prevented such for now.

Victory this Saturday will open those title doors again, with a Santa Cruz rubber match a possibility so long as ‘El Terremoto’ comes through his October rematch against Abner Mares, while Lee Selby’s successful title defence against Jonny Barros two weeks ago could lead to a meeting between the pair later in the year. Then there is WBC champion, Gary Russell Jnr for whose title this weekend’s showdown is an eliminator for.

While those options all appeal, it is imperative Frampton retains focus on the job as they will soon disappear should he come unstuck for a second straight fight, but he is determined not to let that happen on his own patch, especially having been on the road for so long.

“It (victory) keeps them all open,” he agrees.

“I’m still ranked with the WBA, the WBC. He (Santa Cruz) has the Diamond belt and there is Gary Russell (WBC champion) there as well. Lee Selby (IBF champion) is another fight I would like as well, so there are options.

“I could have fought in the States (this time), but I wanted to come home. I love Belfast.

It just doesn’t feel like this is a farewell party in terms of Frampton not boxing again in his home city, but it could well be him signing off from the arena where he is yet to be taken the distance.

A confidence-boosting win is what Frampton wants to gain this weekend and his strengths of counter-punching, sublime footwork and distance control can see him break down the stubborn resistance of Gutierrez in the mid to late rounds.

He is aware he needs to be switched on and not let the visitor grow in confidence, but with a point to prove this should not be an issue.

It was back in January he was collecting the award for 2016 Boxer of the Year from Ring Magazine. One swallow does not make a summer and likewise, one off-night does not turn him into a bad boxer. In that regard, the era of ‘protecting the 0’ has a lot to answer for.

This will be Frampton’s night and should also be a performance that lets the other champions at 126lbs know that he is ready to get back into the title mix.