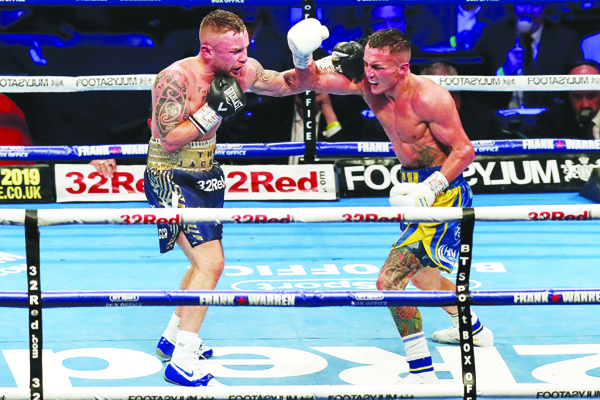 Carl Frampton lost to IBF champion Josh Warrington last time out, but says he still has options to get back to the top

A HUGE summer showdown is still in the pipeline for Carl Frampton with ‘The Jackal’ hopeful the third fight with Leo Santa Cruz can be made.

His promoter, Frank Warren, revealed on Monday that the North Belfast man, who celebrated his 32nd birthday on Thursday will likely be back in the ring at the end of May or start of June with a huge fight planned.

Frampton lost his challenge to IBF champion, Josh Warrington back in December, but still remains a big player in the featherweight division with the WBC recently installing him as number six in their rankings behind champion, Gary Russell Jnr.

However, it’s WBO holder, Oscar Valdez and his old foe and WBA champion, Leo Santa Cruz who are the names that are most closely linked.

Valdez returned earlier this month from a broken jaw sustained against Scott Quigg with a routine stoppage against Carmine Tommasone and reports suggested the Mexican would be willing to face Frampton as early as next month, but ‘The Jackal’ told Belfast Media Group this week: “I would need a month to make light-welterweight!”

He was joking of course, but a return to action so soon is off the table until his court case against Barry McGuigan and Cyclone Promotions is completed in May.

Valdez could be the target still, but top of his list is the trilogy fight with Santa Cruz, who was a points winner against the overmatched Rafael Rivera in Los Angeles on Saturday night.

As is now almost traditional from Santa Cruz post fight, he agreed to face the best in the division with Frampton name-checked along with the other champions, but what ‘El Terremoto’ says and does in terms of opponents has been worlds apart more often than not.

“It’s similar to what he’s been saying after every fight since we last fought – ‘Carl Frampton’ (next) but then he goes and fights Abner Mares in a fight that didn’t make sense. He actually fought (Chris) Avalos, Mares and this other guy (Rivera),” noted Frampton.

“I’m saying it doesn’t make sense, but it does for him financially because he is getting very well paid for fights you could go as far as saying are easy. When you think of it like that, you can’t blame the guy for taking that option.”

Santa Cruz collected $1 million for his win on Saturday, 50-times more than the challenger who pocketed just $20,000.

Those figures highlight just why Santa Cruz can maintain a low-risk, high-reward approach to his career where he doesn’t seem keen to travel or face prime opposition.

Frampton is of an opposite mindset and knows that if a third fight happens, it will be in the United States and he is more than happy to travel across the pond once again.

“The discrepancy between the purses there is ridiculous,” agreed the North Belfast man.

“The fact that fight wasn’t even on TV in the UK tells you enough about the level of interest that fight had here.

“He continually contradicts himself because he already made a statement saying he won’t travel because his dad has visa issues and his dad’s illness.

“He just says stuff because he wants people to hear it, but I’m not expecting him to travel.

“If I fight Leo Santa Cruz, I know I will have to travel and that’s something I’m prepared to do, so we’ll see.

“There have been talks. Frank (Warren) and MTK have been talking to his team. (Oscar) Valdez has also made a bit of an indication he wouldn’t mind fighting me so I have options and that’s a good thing considering I lost my last fight.”

Having lost to Warrington last time, Frampton knows he isn’t the one calling the shots at the minute, but still is enjoying a much-needed layoff after such a grueling fight at the Manchester Arena on December 22.

Last year was the busiest for the Tiger’s Bay man since 2012 as he fought three times and went from one training camp to the next, so he said he will be more than ready to face any of the champions should he get the call for summer.

“Training back-to-back was good for me because I was more active than I’ve ever been,” he explained.

“The fight with Warrington didn’t go as we planned and he won pretty convincingly - plus this court case coming up - so the break won’t do me any harm. I’ll get ready to go in the summer and that can fit in with Santa Cruz and Valdez who will probably be looking to fight about then too.

“I’m open to all options. I’m not a champion anymore, but I’m still a big draw so it’s not like I’m running to these boys with my hand out. I still do big numbers in terms of the TV so there are options.

“A lot of people don’t get the option of big-money fights once they lose so I’m in a good spot. It’s similar to Amir Khan who has been chinned a few times and gets a big fight against Terence Crawford, so I’m in an ok place.”