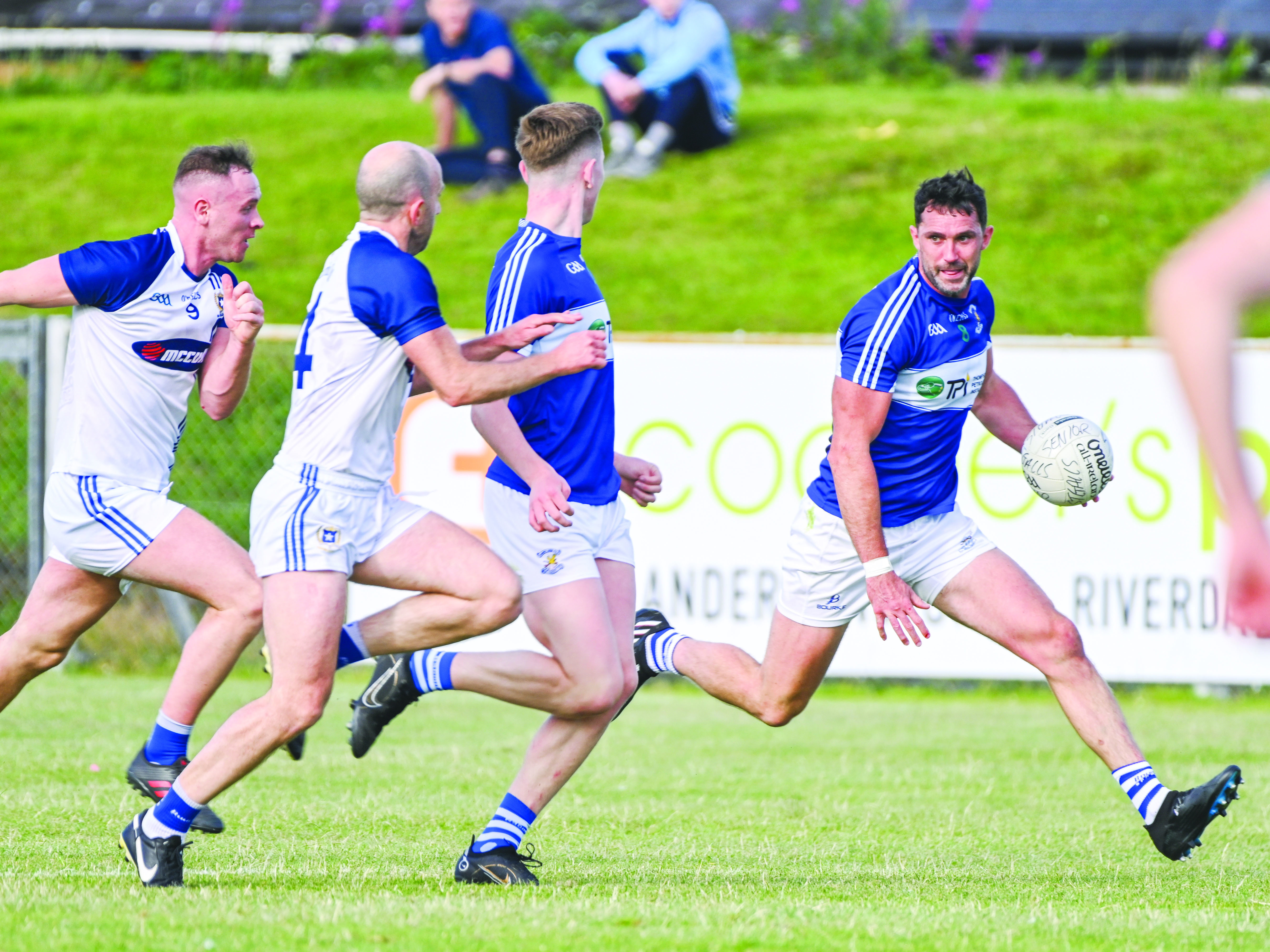 St John’s defeated St Gall’s in the opening round, leaving the Johnnies one win away from the quarter-finals, while it’s must-win for St Gall’s against Creggan on Sunday

THE heat is ratcheting up in the Antrim Football Championships with some games in the group stages across the board already resembling knockout clashes.

In the Northern Switchgear Senior Football Championship, the round one draw between Creggan and Lámh Dhearg has left both teams with little margin for error in Group One.

The Red Hands host St John’s in a 6pm start on Sunday, the visitors fresh from their handsome opening win over St Gall’s that has them on top and the race for the two knockout berths will become a lot clearer by close of play.

Should the Johnnies make it back-to-back victories, they will be guaranteed a quarter-final place with Lámh Dhearg in real trouble, so expect a keenly-contested affair up the hill.

Creggan are in West Belfast earlier in the day and they will be keen to avoid a shock as they take on a St Gall’s side that is in must-win territory.

A late pointed 45 from Ruairi McCann rescued a draw for the defending champions in their opening fixture, so they will be keen to bank the two points.

In Group Two, St Brigid’s will know only a victory will do at home to Moneyglass if they want their campaign to get off the ground.

The Biddies looked in a good place away to Portglenone in the opening round, but the Bannsiders finished well to claim the points, while Dermott McErlaine found the net twice for Moneyglass over Ahoghill to claim the points. That leaves the group finely balanced as opening points for the Biddies or Ahoghill at home to their neighbours - an outcome that has transpired in recent seasons - would put them right in the mix, while a second win for the opposition would guarantee progress.

Aghagallon enjoyed an opening win in Group Three and last year’s finalists enjoy the bye the weekend with the Gorts hosting Tír na nÓg who make their bow.

A victory would leave the Turf Lodge men in a good place to advance into the last eight, but defeat will see their season come to an end with the Randalstown club yet to host Aghagallon.

It’s a similar story in Group Four with Rossa entering the fray for the first time as they make the trip to Hightown to face Naomh Éanna on Sunday.

The Glengormley club were ultimately well beaten by Cargin in their opener despite having some good moments, but it’s do or die for Carl McCabe’s men who will be eliminated with defeat.

It’s Intermediate Championship action on Saturday lunch time with Group One - the only section with four teams - potentially decided by close of play.

That will be the case should Ardoyne - who proved too strong for Lisburn a fortnight ago - inflict a second defeat of the campaign on Dunloy and Sarsfield’s - who had the measure of the Cuchullains at the Bear Pit - taking the points at St Patrick’s to put both teams out of sight. Therefore, expect battling displays from the home sides this weekend.

In Group Two, Glenavy opened with a narrow win over Ballymena and the St Joseph’s outfit will simply have to avoid defeat to St Comgall’s to advance.

Last year’s Junior winners are opening their account and it will be a test of where they are to make a good start to life in Intermediate.

Rasharkin long that final last year on penalties and they will be battling to prolong their season on Saturday when they host Glenaravel having lost their opener at Davitt’s.

In Group Four, St Paul’s will taste their first Championship action of the year when they make the short trip to St Teresa’s where the hosts know they have to get something from this have having lost fairly comfortably in their opener at Aldergrove, so defeat will see them out and out for the year.

The Junior Championship takes centre stage on Friday and in Group One, the two semi-finalists can be decided should Pearse’s and O’Donnell’s both make the most of home comforts.

Pearse’s were pushed by Wolfe Tone’s in their opener, but ultimately came through, and they are at home to Éire Óg who fell to O’Donnell’s.

O’Dee’s host the Greencastle side and will be keen to seal their passage to the last four.
Group Two is poised almost identically although the winning teams from the opening round are away this time around.

That means the hosts are badly in need of points to remain in the hunt and St Agnes’ host Laochra Loch Lao at Woodlands, while Ballycastle welcome St Malachy’s.