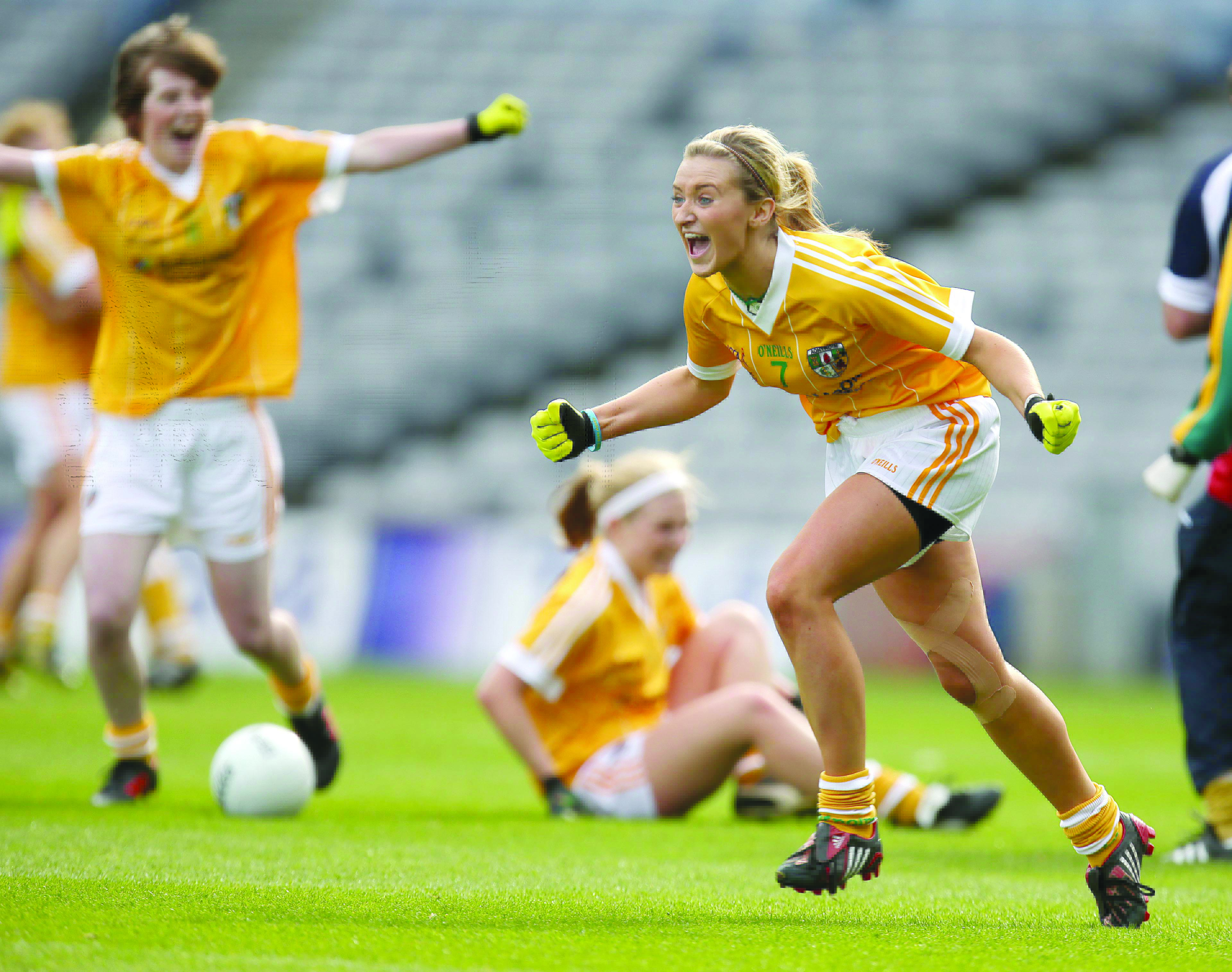 Áine Tubridy celebrates at the final whistle in the 2012 final, but has lost out in two finals since INPHO

TEN years have passed since Antrim last claimed the All-Ireland Ladies Junior title and it’s not a surprise that there are few survivors of that success.

Team manager Emma Kelly played full-back in the win over Louth, while present team captain Cathy Carey was also a starter on the day.

So too was Áine Tubridy who lined out at wing-back and whilst that win may have led her to believe that success on the big stage would become as regular occurrence, the closest the St Paul’s ace has come is the finals of 2016 and 2021 when Antrim came up empty handed.

Regardless of this being her fourth final at Croke Park and having bags of experience with her club including an All-Ireland Intermediate final in 2019 against Offaly’s Naomh Ciarán, Tubridy admits there will still be a few butterflies this week, but the pain of defeats since that glory day in 2012 can help drive this team on.

“This is my fourth time - some of the girls it’s their first - so there’s a bit of a mix, but I’m getting used to it,” said the schoolteacher who was a university fresher 10 years ago.

“I’ll get a bit nervous this week but I’m used to Croke Park a bit by now.

“I was a part of that win in 2012, so I know what it feels like to win one and also know the hurt of losing as well.

“I think it’s good to have the experience of both, especially for the girls who were on the panel last year to have girls there who have won one or even two like Cathy (Carey) who was there in 2009 and 2012.”

The overwhelming majority of this Antrim panel have experience of All-Ireland finals’ day, so while last year may have been something of an eye-opener for some, this time around they will know exactly what to expect and that can help alleviate any anxiety ahead of the game.

Still, there is a job to do to ensure the younger member so of the panel play the game and not the occasion.

One newcomer is Lara Dahunsi and while she may be stepping out onto Croke Park for the first time, Tubridy points out her St Paul’s teammate has plenty of big-game experience including that Intermediate Club final at Breffni Park in 2019.

“It may not have been Croke Park, but we are trying to make sure they (less experienced players) realise it’s just a pitch and posts,” Tubridy outlined.

“Lara is a massive bonus to have on the panel as she has experience playing at club level at a high standard. She is going to come in and the occasion won’t get to her.

“In Croke Park, you can hear very little. You can’t hear the managers or anyone on the sideline. You can’t even hear the crowd too much, so it’s just about blanking all that out because it’s just a game of football at the end of the day and hopefully the heartbreak from last year follows through and we get over the line this year.”

The countdown continues to the 2022 @TG4TV All-Ireland Finals at @CrokePark!

Antrim and Fermanagh are no strangers to one another. Indeed, they have played each other so frequently, there will be no surprises come Sunday in terms of style of play or personnel.

The Saffrons had to dig team to turnaround a half-time deficit in the Ulster decider to eventually squeak hoe by the minimum, but win they did.

That will give confidence, but also provide enough warning that anything less than their best will result in them coming unstuck and Tubridy is in no mood to take her eye off the ball given what is at stake.

“We’ve played each other so many times: this year, last year, 2019 we played them four times,” she recalled.

“Still, you can’t be complacent as while we’ve beaten them twice this year, they’ve beaten us once too although hopefully the Ulster Championship final win will stand us in good stead.

“Even at club level, we’ve played Kinawley loads of times so it’s not even at county level we are familiar. We know those players and they will know us, so we can’t be complacent although hopefully we come out the right side.”