Gallagher enjoying the professional life ahead of title defence 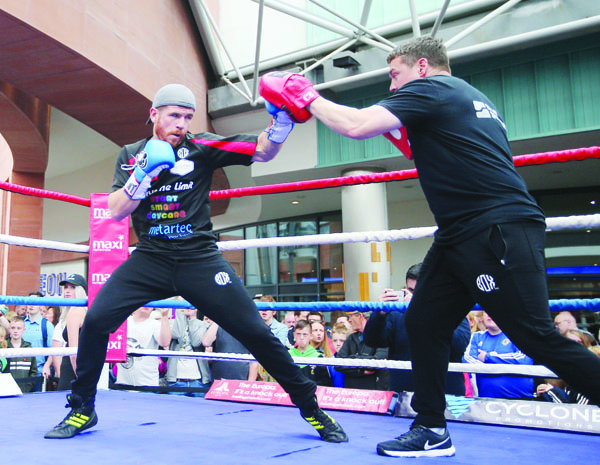 Paddy Gallagher believes he is improving all the time under his coach, Gerard McManus Picture by Jonathan Porter/PressEye.com

PADDY Gallagher says he now knows what’s it’s like to be a professional boxer after five years in the paid ranks and believes his new regime can guide him to world honours.
The Lenadoon man defends his Celtic welterweight title against Gary Murray at the Meadowbank Sports Centre in Edinburgh on Friday and ‘Pat Man’ insists he will be finished by the sixth round and then look forward to another high-profile outing.
While 30 year-old Murray from Coatbridge has a perfect 12-fight record, he has not been past six and mixing is with the 2010 Commonwealth Games gold medallist represents a major step up in class.
Gallagher insists he will highlight the gap in levels on Friday and with the backing of his management team, MTK Global, will push on after.
“I have been flat out. I never thought I would be as good as I was back in the day, but I think I’m getting better,” he insists.
“I signed with MTK in April and about a week later I was confirmed for the Burnett show and then a few days later, I was confirmed for the Frampton show.
“That didn’t happen, but a week later I was confirmed for this Edinburgh show. I’m sure I will be confirmed for another one before this fight even.
“I have never had as good management and (as many planned) fights, so it’s been unreal. It’s weird feeling like an actual professional boxer five years in.”
Gallagher is dismissive of the threat posed by Murray given his form in the gym and with confidence high, has just one prediction for what type of performance he intends to deliver: “A very dominant one.
“I’m just going to go in there and do what I want to do. I’m just going to beat him up and put in an amazing performance and finish him in six rounds. In the press conference, I said I would give him until the sixth if even that far, so I will stick to that.”
Since losing out to Tamuka Mucha in a British title eliminator, Gallagher has boxed just three rounds in his win over Craig Kelly.
While he wants to get rid of Murray inside the distance on Friday, he is also torn with the prospect of putting into practice some of the things he and trainer, Gerard McManus have been working on in the gym.
“I want to get rounds too. Not only has my boxing ability improved, but I am doing things I haven’t before,” he revealed.
“Gerard has helped me fix things. He has done amazing work with me and it’s all starting to click together now.
“I was getting stressed in sparring a few weeks ago saying to Gerard to stop making me do this and that, but he said it was going to work and the last two weeks it has.
“I’m going to go in here, get the rounds behind me because I have only had three rounds in the last year. I’ll have six this week then all being well, I can get a good title shot, a 10 or 12-rounder and take a break for Christmas. In February I want to be out again, so I have got my next two years planned.”
By the end of those two years, Gallagher will be 30, the same age Jamie Conlan is today.
With Conlan getting his crack at a world title next month, Gallagher takes heart from the fact that the big opportunities don’t pass at the end of your 20s and believes he can be in a similar position.
“I want to rack up the titles from there, going belt-by-belt and work towards a world title all being well,” he explains.
“It just goes to show you. There’s Jamie Conlan, people saying Jamie would never get this chance but he has. It shows you it can happen.
“Over the next while, he is going to be a world champion, Frampton will be again next year, Burnett is going to be a world champion. So all being well that will be me in 2019.”