Gang of four behind Poleglass shooting 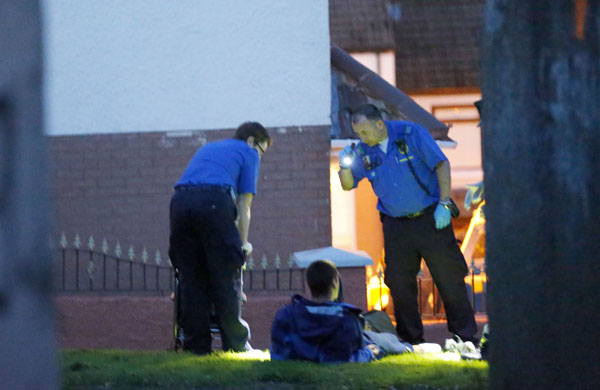 The injured man is treated by paramedics. Picture by Kevin Scott

Dissident republicans are being blamed for a paramilitary-style attack that left a man in his 20s needing hospital treatment for gunshot wounds.

Around 10pm last night the man was approached by the gang who ordered him into an alleyway in the Laurelbank area of Poleglass where he was told to lie down. He was then shot once in the foot.

The man was later treated in hospital and his condition is described as not being life threatening.

The attack is similar to another incident that took place in Ardoyne in June where a man was shot in both feet after being taken out of his house.

On that occasion, the bullets failed to penetrate the footwear of the victim, who was believed to be wearing steel toecap work boots.

Dissident republicans have been active in the Poleglass area and carried out a number of similar shootings in 2016. The last was on June 2 when a man was shot in the leg behind St Kevin’s Primary School.

"This attack on a young man in the Laurelbank area of Poleglass was wrong and I condemn it,” she said.

"There can be no place for these type of incidents in our society. I would call on anyone with information on this shooting to being it forward to the PSNI."

Detective Sergeant Michael Hawthorne said he wanted to speak to anyone who had knowledge of the incident.

“I would appeal to anyone who witnessed this incident to contact detectives at Musgrave on 101 quoting serial 1290 24/7/16.

“Or, if someone would prefer to provide information without giving their details they can contact the independent charity Crimestoppers and speak to them anonymously on 0800 555 111.”