Get Out And Stay Out Rally Tells Dealers 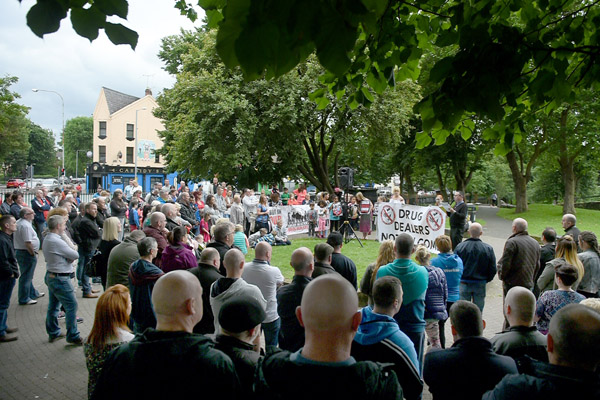 Heroin dealers operating in the Waterworks were told the community will no longer tolerate their behaviour at a large public rally in the park on Wednesday night.

Around 250 people, including residents, community leaders, teachers, youth workers, clergy and activists, gathered to hear Father Martin Magill and organiser Christina Sloan, a local resident, speak of their fears about what is developing in the park.

Christina said she had grown up in the park and had called the rally because she didn’t want to see it get to the stage where her kids couldn’t use the facility because of the dealers.

“They are using this park to deal drugs openly,” she said. “Recently drugs were found lying beside the children’s play park. As a mother I am afraid that if we don’t do anything this park will become a no-go area.”

Fr Magill said there was a lot of concern over drug activity in the park.

“The reason we are here tonight is to raise awareness of the issue and to send out a very clear message that we don’t want drug dealing or drug taking going on here. It’s important to recognise we have power and the fact we are here in such numbers from the young to the not so young shows clearly that we care and want to tackle this issue.”

He said there were “no quick fix solutions” but through the organisation of the rally both the Public Health Agency and Belfast City Council had been in touch to lend their support to the anti-drug efforts.

Following the speeches the crowd walked to a wooded area beside the top pond where heroin users have been seen gathering.

Anti-depressant tablets and needle packages were found alongside other paraphernalia used in the taking of drugs. The use of the Waterworks by heroin dealers was first revealed earlier this month when local business owners raised the alarm about suspicious activity. Since then addicts have been seen travelling to the area to buy heroin.

Local Sinn Féin MLA Carál Ní Chuilín, who attended the rally, said they would be raising the issue with police.

“Genuine concerns have been voiced about recent reports of drugs being taken and sold in the park and indeed needles being found by park users,” she said. “The only answer to this issue is effective community policing and we are urging anyone who sees anything suspicious or has any evidence of crime to come forward to protect this community and this much loved public facility.

“Anyone that is addicted to drugs needs support and are victims of those that seek to exploit vulnerable citizens for profit. There has been good work done to tackle drug dealing in conjunction with the community, however more remains to be done by the PSNI. The Waterworks has received significant investment in recent years and the fact that running, playing, walking, soccer, fishing and similar activities are so popular here should ensure there will be absolutely no tolerance for criminality.”