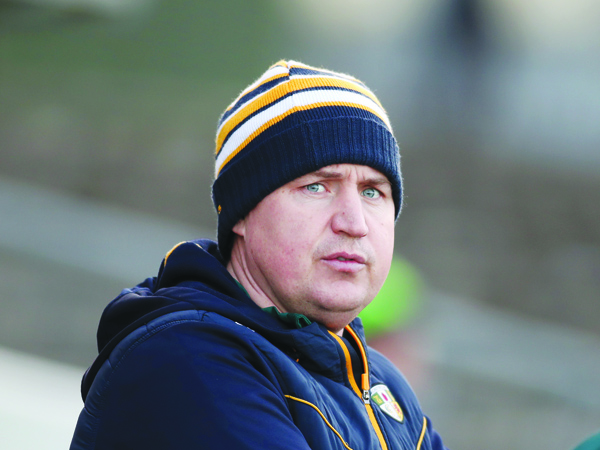 ANTRIM’S hurlers will attempt to make it three wins from three in the space of a week when they travel to Abbotstown in Dublin on Saturday to face Wicklow in the Keogh Cup (throw-in 2pm).

The Saffrons began their campaign with a handsome victory over Meath in Navan last weekend in the Leinster pre-season competition before recording an opening win over Armagh in Ulster’s Conor McGurk Cup at The Dub on Tuesday evening.

Victory this Saturday will ensure a semi-final in early January, while they will round off their McGurk Cup group games against Longford at The Dub next Saturday (December 14) with a similar prize up for grabs.

It has been a positive start under new manager Darren Gleeson and the Tipperary All-Ireland winner says he was happy with how his team played on Tuesday given they were down to 14 men after five minutes following the dismissal of Gerard Walsh.

“It was a test with 14 men and we probably would have learned a bit more tonight than we did on Saturday,” he said.

“We got a run early on Saturday when we got the scores up, but tonight we lost a man early and had to work harder.

“Still, we ran out 11 point winners in the end, so you have to be happy coming away with that kind of win any time, especially with 14.
“We got a good, physical contest and lads will be sore in the morning, but that’s what we’re looking for. We’re looking for challenges and tests and I think the boys responded to it. The few that came off the bench added to it so we learnt a fair bit.”

While it is the first stages of a new season, Antrim brought a good intensity and pace into Tuesday’s game against the Orchardmen and had the game virtually sewn up by half-time when a pair of Alex Delargy goals helped them into a 2-11 to 0-6 lead.

While Armagh rallied after the break, they were unable to get back to within seven points and Antrim’s substitutes were make a good impact with the returning Michael Bradley and Niall McKenna getting on the board.

The Saffrons were able to experiment a little and give game-time to some who didn’t feature on Saturday, but it was the commitment shown on Tuesday that pleased Gleeson on Tuesday.

The fact Antrim are involved in two different competitions at this time of year also affords the opportunity to play and extra couple of competitive games and it is this environment where the Portroe native can really get an insight as to who can establish themselves heading into the National League in the new year.

“They ran themselves empty and that’s a big positive because they could have left it there when we went down to 14 men,” he agreed.

“They decided they were going to work and that’s leasing for me and pleasing for the lads, but we’ll get back at it again and get a training session in before Saturday.

“We head down the road to Abbotstown to play Wicklow which will be another good challenge for us before we hit into another McGurk Cup match next weekend (against Longford).

“We’re getting lads on the field and I know it’s difficult at this time of the year, but boys want to be playing matches.

“Getting the chance to play three or four matches before Christmas is much better than slogging around the field up in Jordanstown or Dunsilly.”

While there are still some players to return including the Naomh Éanna contingent who are preparing for an All-Ireland semi-final against Kilkenny’s Tullaroan in the first weekend of January, others have come back into the fold this year after some time away for various reasons.

Bradley has been joined by his St John’s clubmates Domhnall Nugent and the Johnstons - Ciaran and Conor - while McKenna (Sarsfield’s) has come back in as-well-as Walsh who is joined by his Rossa team-mate Aodhán O’Brien.

There certainly seems to be added strength this year and that can only help Antrim’s cause according to Gleeson who is familiar to most having been part of the backroom set-up in recent years.

“There is extra competition and that’s what I want,” he confirmed.

“There are eight or nine new guys into the squad this year and that’s a real positive. Some of them have been with Antrim before and are returning, but there are a couple of first-timers and we’ll see more of them next weekend (against Longford).

“There are the St Enda’s boys to come back in like big Joe (Maskey) and we’re having a look at a couple more of them. There are a few lads coming back from injury and the Dunloy boys are starting to filter back in. We’d three or four of them out there tonight and we’ll get the rest out next weekend.”