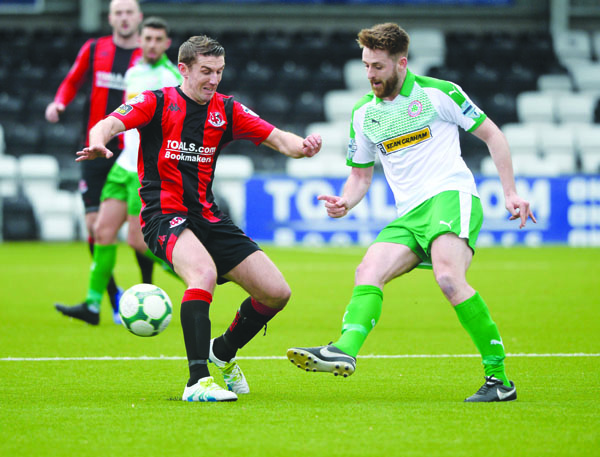 The Reds host the Glens in the final pre-split league fixture at Solitude on Saturday afternoon (3pm kick-off) hoping to make it three wins from three against the East Belfast men this season.

Both victories arrived courtesy of injury-time goals from Jay Donnelly and Joe Gormley, but January signing, Niall Grace is expecting a tough encounter in the first of four consecutive home fixtures in a row.

“Glentoran are a good side,” said Grace.

“They’re a bit like ourselves in that they shouldn’t be where they are, a lot of people would think. They’re going to come into the game expecting to win the game just like we are.

“Saturday is the first of four home games on the bounce. We’ll look at each game and go out to try and win and have the same attitude as we did in the second-half against Crusaders.

“We were a lot better and if we bring that in on Saturday then we’ll be confident enough.”

The Reds come into the encounter off the back of a 2-0 defeat to Crusaders in the North Belfast derby two weeks ago.
Grace believes there were plenty of positives from their second half showing, but insists they won’t dwell on the result moving forward.

“Obviously, we want to win every game we play in, but we knew what Crusaders were going to bring,” reflected Grace.

“In the first-half, they scored two set-pieces and we knew the threat they were going to bring.

“The second-half was a far better performance and we looked to control the game, but we needed one of the half chances to go into the net. Unfortunately, it didn’t happen. We’ll move on against Glentoran and hopefully get the three points.”

Grace was a deadline day loan signing from Glenavon having previously featured for boss, Paddy McLaughlin at Institute, helping the Derry side land promotion to the Premiership this season.

The midfielder said he has been made to feel welcome since his arrival and feels the Derry personnel around the squad has helped him to settle in.

“I love it here and players have be great in welcoming me,” Grace revealed.

“Having a few Derry lads here has made it that wee bit easier and getting to work with Paddy (McLaughlin) again was a great opportunity. I’m buzzing to be here and we’ll see what comes at the end of the season.”

Grace also offered insight into Paddy McLaughlin’s attacking philosophy and feels his side will only improve and move up the table as the players get used to working on style of play and shape during training.

“It’s going to take time to actually get the results because everybody has to get used to it. It’s probably a different style of play than they’ve been used to.

“If we keep on working hard at training and doing the drills that Paddy, Brian (Donaghy) and Conleth (McCrudden) are putting on, I have no doubt we can start performing to a high level and move up the table.”