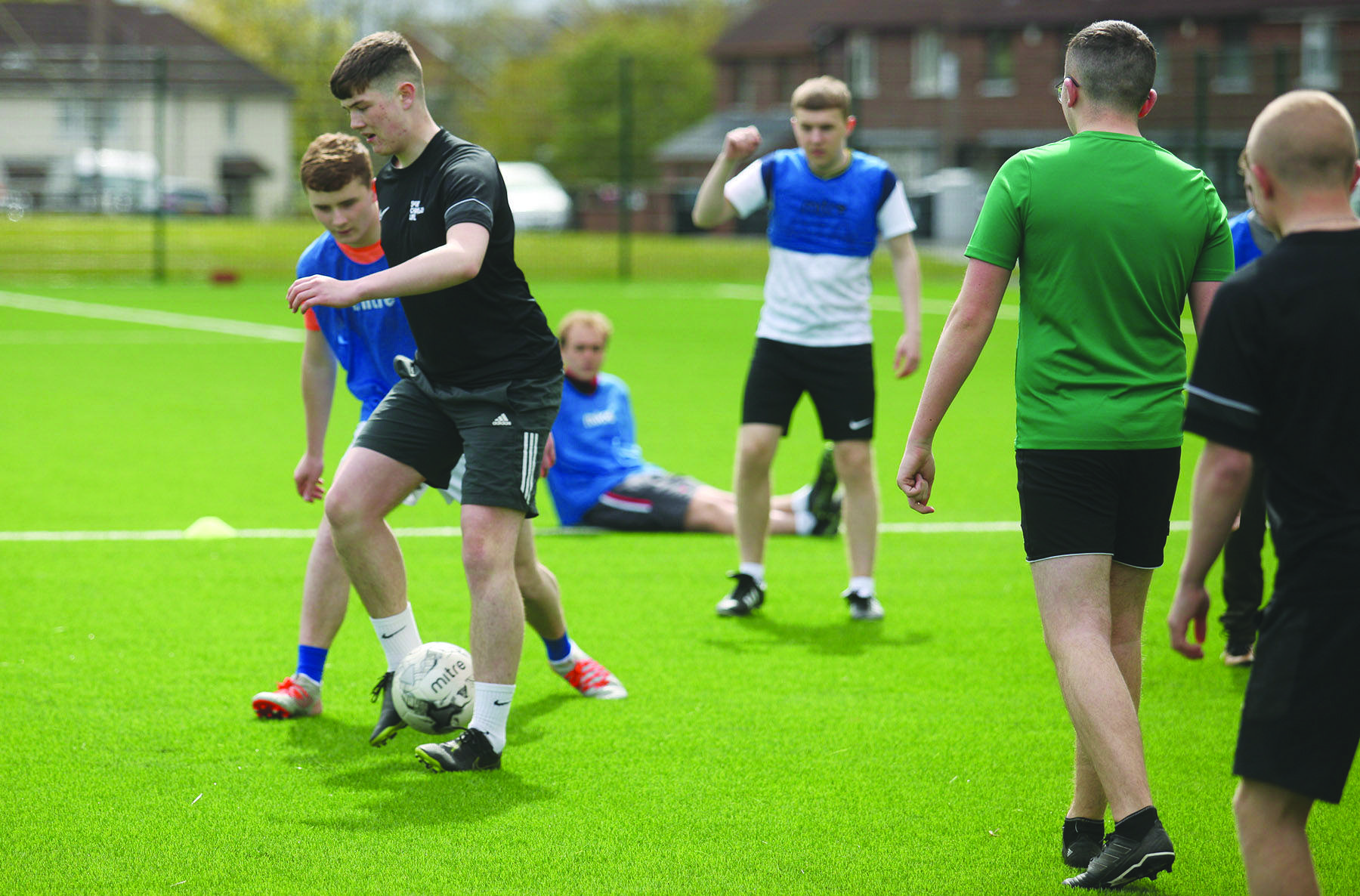 La Salle pupils are put through their paces last week

THE return of outdoor sport was greeted with much fanfare in recent weeks as pitches once again became a hive of activity.

Across the board, young people once again got the opportunity to return to action and that was the case at the impressive new Glassmullin pitches as pupils from De La Salle were put through their paces over the past couple of weeks thanks to the Sport Changes Life Foundation.

With offices in Belfast and the United States, the primary goal of the Sport Changes Life Foundation is to provide an opportunity for raising the aspiration of young people on both sides of the Atlantic so that they can live out their dreams and guide them as sport changes their lives.

It has engaged with schools from right across the community to offer young people a pathway in life with their eight-week programmes involving a timetabled series of sport plus a good relations module that helps motivate through an alternative form of education and mentoring.

“A similar programme is ongoing in the Boys Model at the minute and one week we had a virtual meeting with the De La Salle College pupils from Model for a quiz.

“The programme a tie-in with Glentoran Football Club as well; Chris Gallagher is a past pupil and he has been on the Zoom meetings as well as the training sessions for the past couple of weeks along with Patrick McClean.

“With the better weather and the lockdown restrictions being lifted over the past couple of weeks, we have been able to use Glassmullin. We’ve had (Glentoran players) ‘Cricky’, Patrick and Alan Teggart - who is with Sport Changes Life and plays for Dungannon Swifts - taking the De La Salle College pupils for training sessions.

“There is a longer-term benefit to this programme, but unfortunately Sport Changes Life haven’t been able to work throughout the year due to lockdown. Gareth would have a number of contacts in basketball who would come over from America and that’s something we’d like to develop around September.”

Glentoran’s backing of the programme resulted in something of a homecoming for Gallagher who was on hand last week during a pitch session with the De La Salle College pupils.The past pupil explained that getting young people back involved in physical activity is hugely beneficial to their physical and mental wellbeing, whilst their involvement can also help to broaden their horizons in terms of what path they wise to go down in the years to come.

“We joined with Sport Changes Life at Glentoran a few weeks back and did some Zoom calls with the boys,” explained ‘Cricky’.

“Obviously, with the Covid restrictions we were unable to come into the school but have been able to get out on the Glassmullin pitch for the past few weeks.

“It’s really about getting the boys involved in sport and showing them there are more pathways to life. It keeps them occupied at the same time and it’s good for the mental side of things.

“For us at Glentoran, it’s great to be involved in these projects and for me it’s good to be able to come back to my old school to get involved.”

Naturally, the programme has attracted a healthy number of participants as it affords the opportunity to resume physical activity at school with restrictions still limiting what sports can be offered at present.

It is not limited to those who are regarded as the top sports’ stars in the school, but to all regardless of ability and the hope is that it can be expanded further once further easing of Covid rules come into force.

“The numbers have increased over the past few weeks, but the pupils need a physical release from school work and assessments, so this really seem to help,” explained Mr Tohill.

“This is the only recreational PE the boys have so it’s really good for them in that regard.

“We have to thank the sponsorship we have received through Sport Changes Life as everybody who has participated got a t-shirt and pizza vouchers.

“The pupils have really enjoyed it and you can see that in the short space of time that it has improved their confidence.

“Under normal circumstances it would be multi-sports, but due to Covid they have had to change the programme to outdoors.

“The best thing about it is that it is inclusive, so it’s not aimed at the elite footballers. Everyone who wants to be involved is welcome to be.”