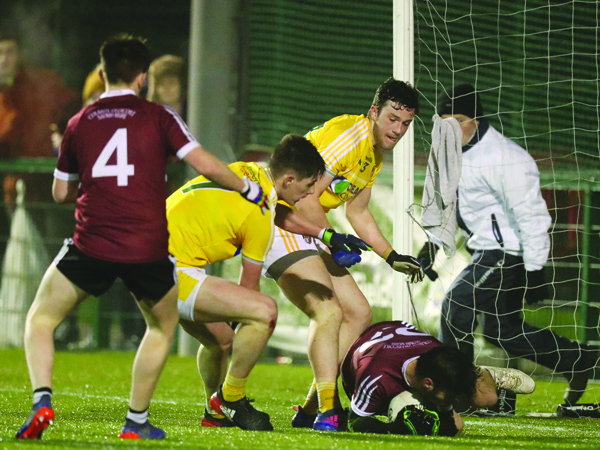 ANTRIM’S hopes of reaching the semi-finals of this year’s Dr McKenna Cup ended at a misty Woodlands on Wednesday night as St Mary’s grabbed four goals at vital times to claim the points.

With the students already out of contention, it was the Saffrons who came into this game with something to play for in terms of advancing into the last four, but they were undone by those four goals as the home defence was caught wide open on several occasions as the fourth major in injury-time ending the argument.

It was a much changed Antrim side that defeated Cavan four days before and while victory would have been most welcome on the night, the opportunity to run the eye over the entire panel over the three McKenna Cup games was the main objective for Antrim manager, Lenny Harbinson.

“It was (disappointing) to a certain degree, but in saying that, we made six changes in personnel and nine positional changes (from Sunday),” he said.

“In the same theme of what we’ve been doing in the McKenna Cup, we’re trying to get everyone on the panel some game time so we can have a look at them and for us as a management team to learn about them.”

It was a very slow start from Antrim on the night with Ricky Johnson making a vital interception from
Ryan McSherry to prevent a certain goal in the opening minute, but St Mary’s did hit the front from a Darragh Kavanagh free.

Chris Kerr’s kick-outs continued to catch the eye and from one restart on eight minutes, Antrim opened their account as he found Peter McNicholl who played Colum Duffin through to score.
Kerr was called into action again when saving from a Joe Colton toe poke before Antrim went ahead from a Ryan Murray free.

A lengthy stoppage for an injury to St Mary’s midfielder, Jarlath Og Burns held the game up for five minutes midway through the half and when the action resumed, another St Mary’s goal chance was snuffed out by Stephen Beatty with the ball worked up to Gareth Magee who kicked a good score.

St Mary’s hit back with a Kavanagh point and they finally got the goal they had been threatening when Paul Gunning kicked a deft pass across to the advancing Ciarán Mac Íomhair who found the net three minutes into added time.

After McConville nudged St Mary’s further ahead just after the break, Antrim began to assert themselves with Gareth Magee and substitute, Conor McGourty kicking fine scores and they could have found the net when McKeever broke the ball to McAleer, but the Ballymena man couldn’t steer the ball on target when off balance.

Conor Murray did level the game and McCann edged Antrim ahead on 43 minutes as it appeared they would push on, but they were rocked at the other end when Mac Íomhair popped up to palm home his second goal of the night from a Kavanagh pass.

Antrim replied again with Patrick McBride and Matthew Fitzpatrick pointing to level the game on 50 minutes, but once more, Antrim were caught out at the back straight after. This time, Stephen McConville’s long delivery found Liam Devlin all alone to crack home his side’s third goal of he night.
The sides went point for point with the gap still three entering the final minutes before a Ryan Murray free and excellent Conor McGourty point with the outside of his boot left just one between the teams with the game entering stoppage time.

Antrim piled forward looking for an equaliser and should have grabbed a winner as Ruairi McCann put McAleer through, but his shot was saved by the leg of a defender and scrambled clear. St Mary’s went straight up the field with man-of-the-match, Stephen McConville swapping passes with Aaron Boyle and cracking home his side’s fourth of the night to seal victory before a Paul McAtamney point put the icing on the cake.

“You can see why because they have a structure of defending in numbers and they try to hit you on the counter. From our point of view, the naïvety of our boys was in not tracking the runners, but I liked the spirit in that when they scored a goal, we came back and got it to within a point or two.

“Unfortunately we conceded four goals tonight, but there was a lot of spirit about our boys trying to dig out a result.”

The Antrim manager has been happy with how the pre-season campaign has gone having got his chance to have a look at the entire panel and noted the backing from the County Board.

With the McKenna Cup campaign over, the focus now switches to the start of the National Football League Division Four campaign at home to Leitrim in two weeks.

“The big focus is for the National League on the last Sunday in January against Leitrim,” he agreed.
“This is good preparation both for the panel and for the management to see what resources we have and trying to get the right balance in the team.

“You want to start with a win in Division Four, but that’s easier said than done because everybody wants to do the same. There is a slight advantage in being at home, but it’s all up to us. You have to perform on the day.”