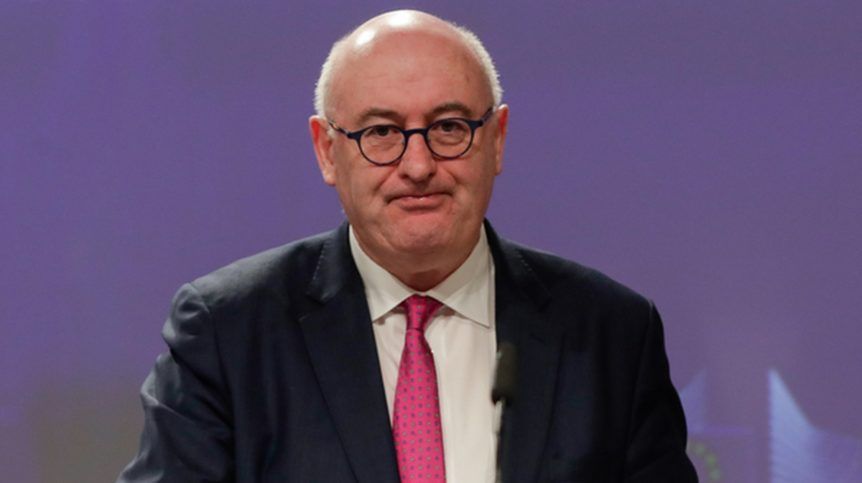 CASUALTY: EU Commissioner Phil Hogan was one of the big names to fall victim to Golfgate

That was the tuneful sentiment from one of the songs in  Gilbert and Sullivan’s The Mikado. That comic opera may have been written some 150 years ago, but it can be applied to two cases in the news recently.

First there’s  Supreme Court Justice Seamus Woulfe, who attended the Oireachtas Golf Society dinner in Galway in August. He was there with around 80  people at the Station House Hotel in Clifden. There were senators and TDs, former senators and former TDs, journalists – all sorts. The south’s acting chief medical officer, Dr Ronan Glynn, said the event was out line with public health guidelines aimed at preventing the spread of Covid.
When the Clifden knees-up was discovered, there were three people who felt the lash of punishment. Dara Calleary, the Minister for Agriculture, lost his job and plunged back down into the world of ordinary TDs. Senator Jerry Buttimer of Fine Gael lost his post as deputy chairperson of the Seanad. And EU Trade Commissioner Phil Hogan fell from his spectacular post close to the sun and hit the earth with a wallop.

But what of Supreme Court Justice Seamus Woulfe? He was there too. Naturally, the Supreme Court was seriously worried when they heard of the attendance of one of their own. The Supreme Court Chief Justice Susan Denham was asked to put together a report on Woulfe’s attendance. She did and she found that Woulfe “did not break any law or knowingly breach any guidelines”.

Woulfe’s stubbornness, which is showing signs of Phil Hogan proportions, has reopened the Pandora’s box of judicial appointments. Little wonder m’luds are not pleased. Story not going away.#golfgate pic.twitter.com/tEhRjdOqrd

Yep. Though there were several political corpses littered around the place after Golfgate,  Justice Seamus Woulfe was not to be found among them.  He didn’t break any law, he didn’t knowingly breach any guidelines. In short, there was no punishment to fit Justice Woulfe’s crime,  because he’d been guilty of no crime.

But hold on. This is confusing.  If attendance at Clifden was no crime, what were all those punishments meted out to Calleary, Buttimer and Hogan for?

Sssh. Silence in Supreme Court. Supreme Justice Seamus was too big to fail.

Which brings us to President Trump. The US president is being treated for Covid. For weeks, months, now, Trump has been ignoring the guidelines about distance, about face masks. It wasn’t that he didn’t know the rules, he just thought they were rubbish. His presidential opponent Joe Biden sends his prayers and good wishes for Trump’s full recovery.

There are people who when they heard Trump had the virus punched the air and shouted, “Tell me, how does it feeeel?” Others, of a nasty nature, sent their worst wishes by Twitter, hoping that Mr Trump might be devoured by Covid.

That second wish – for a punishment of death  on Mr Trump – is clearly unfitting and inhuman.  But there are a lot of people who think that a less drastic but fitting punishment for Trump would be that he go through the Covid wringer, emerge shaken and humbled, and that he not be re-elected in a few weeks’ time.

That seems a very possible outcome, and as punishments go, it’s pretty near to fitting. The night before he was tested positive, Trump mocked Joe Biden for always wearing a mask. How very appropriate, then, that Trump’s mockery and flouting of the Covid-19 guidelines should be met with a thorough dose of the same Covid.

It would appear that God, or the universe, or Fate, or whatever you want to call the power that gave Trump Covid, has a sense of what is fitting, what is an appropriate punishment for the crime of which Trump was so obviously guilty.

In Ireland, several people of note got whacked for attending that Clifden dinner. The exception was Justice Woulfe,  who was told it was okay to go  by his boss, Chief Justice Denham. Which is probably why she’s now returned a not-guilty verdict on Seamus.

Sometimes we like to cluck our tongues at the inequality and unfairness of life in the US. Who are we kidding? When it is convenient, the highest legal institution appears to have ripped the blindfold off the figure of Justice and knocked her scales sideways.