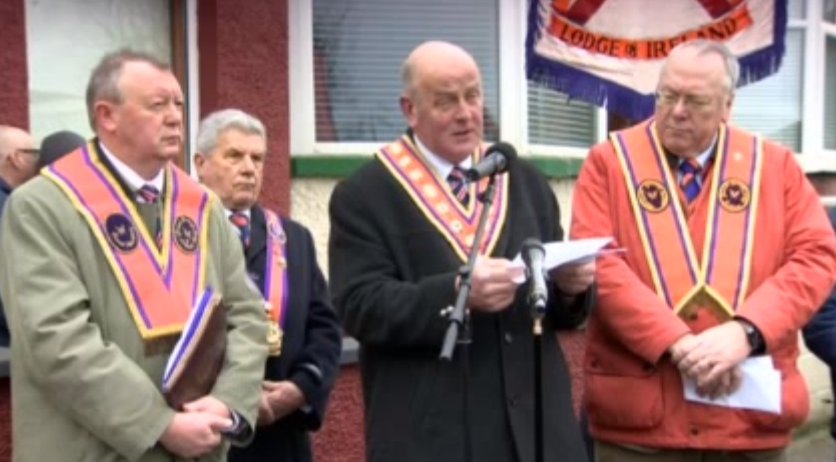 Grand Master Edward Stevenson speaking at Woodvale on Saturday, surrounded by other senior officers of the Orange Order

The weekend call by the Grand Master of the Orange Order for more loyalist protests over the Twaddell Avenue impasse has drawn angry criticism from a former leading member.
Reverend Brian Kenneway, a former convenor of the education committee of the Grand Lodge of Ireland, said he’s been left “distraught” after Edward Stevenson urged Orange Order members and supporters to take to the streets again in support of the Twaddell protest, as well as that at Drumcree.
Writing in his online blog, Mr Kenneway reminded Mr Stevenson that violence had resulted from earlier protests and he denied the Grand Master’s claim that Protestant civil rights were being denied at Twaddell and Drumcree.
“Have the Grand Master and the senior officers of the Institution learned nothing but to repeat the mistakes of the past?” he said. “What has ‘holding peaceful and legal protests’ ever achieved? What guarantee can be given that they will be both ‘peaceful’ and ‘legal’? The parade on the Twelfth 2013 at this location on the Woodvale Road was neither ‘peaceful’ nor ‘legal’, leading to violence against the Crown Forces and seeing many Orangemen before the courts.”

At the scene of intense violence on the Woodvale Road on July 12, 2013, Mr Stevenson said on Saturday that he was encouraging Order members and supporters to hold peaceful and legal protests “across Northern Ireland, at times and locations of their choosing, over the coming weeks.” He continued: “Such rallies, which will be entirely lawful, will be held in solidarity with our Orange brethren here at Ligoniel, and Drumcree, and will be a public show of our dissatisfaction at the ongoing and persistent demonisation of our loyal institution.”

Mr Stevenson accused Secretary of State Theresa Villiers of having performed “a disgraceful u-turn” in not proceeding with the mooted North Belfast parading panel. But Rev Kenneway said: “The Grand Orange Lodge of Ireland officers are not behind the door in doing u-turns or failing to keep their word. The Grand Master in his speech proclaimed that the Orange Institution is a Christian organisation. If that is the case then surely the words of Christ should be taken seriously. Did Jesus not say something in Luke 6:42 about taking the beam out of your own eye before you take the mote out of your brothers? When the Orange leadership met with the leaders of the three Protestant churches on 2nd December 1998 they agreed to issue a statement encompassing the points discussed. Had they done so they would have been supported by the three church leaders, who agreed to issue a statement of support. But by failing to keep their word they treated the church leaders with contempt.”
And Rev Kenneway also hit out at the timing of Mr Stevenson’s call for more protests. “Coming as it did on the same day Gerry Adams made his speech to the ard fheis it achieved one purpose only – it made Gerry Adams sound good.”

North Belfast MLA Gerry Kelly said Mr Stevenson’s speech was another attempt to weaken the Parades Commission. “Bringing people on to the street to protest is not the way to find an acceptable solution to this or other contentious parades,” he said. “It is also a further attempt to undermine the Parades Commission, which is the statutory body set up to deal with the issue of contentious parades.”