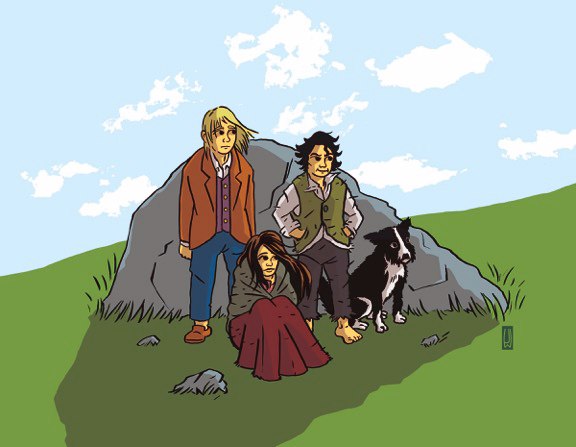 An illustration by John Walsh from The Bad Times, which presents the worst humanitarian disaster of the 19th century in a captivating form

The horror of Ireland’s Great Hunger is to be told in graphic detail in a unique collaboration between Irish America's leading authority on An Gorta Mór and a Boston artist brought together by Quinnipiac University in Connecticut.

Professor Christine Kinealy – author of the devastating indictment of British government policy in Ireland during An Gorta Mór, This Great Calamity – has teamed up with John Walsh to present the story of the worst humanitarian disaster of the 19th century in a captivating, modern form.

The Bad Times, due in shops in December, was inspired by a compelling painting in Ireland’s Great Hunger Museum at Quinnipiac University which boasts the world’s most comprehensive collection of art relating to An Gorta Mór. Christine told the Andersonstown News that the painting, which shows three young peasants in the period just before Black ’47, inspired the story she wrote bringing the three young people to life to accompany the images in The Bad Times.

Prof Kinealy, now Director of Ireland’s Great Hunger Institute at Quinnipiac, where she has put together a programme of lectures, conferences and courses complementing the museum, says the graphic novel will bring the story of the Great Hunger to a new audience.

“Hunger and famine are with us in the 21st century and as such it’s very pertinent to young people today and I think a graphic novel is ideal. It’s a very powerful medium for speaking to a younger generation.”