Hail Hail, the Celts are here 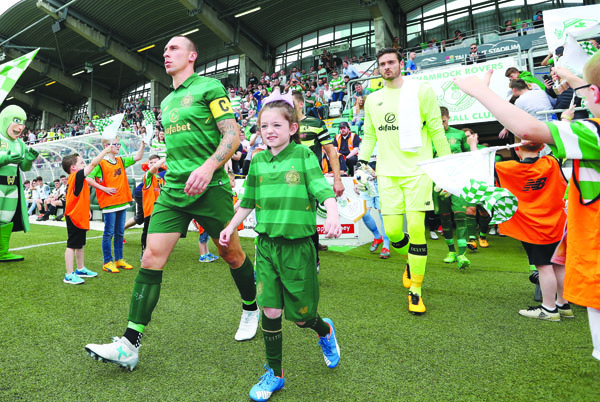 Celtic's Scott Brown leads his team out against Shamrock Rovers before last Saturday’s 9-0 win at Tallaght Stadium. The Celtic skipper is expected to shake off an Achilles problem to feature against Linfield at Windsor Park on Friday evening

CELTIC’S 'Invincibles' take on Linfield in the first leg of their mouth-watering Champions League Qualifier on Friday evening at Windsor Park.

Frequent visitors to these shores for pre-season and exhibition games, Celtic last played a competitive fixture in Ireland back in 2013 when they faced Cliftonville in the second qualifying round of European football’s premier club competition.

That was the beginning of what proved to be Neil Lennon’s last season in charge of Celtic. The Lurgan native oversaw a comfortable 3-0 win against Tommy Breslin’s men at Solitude as goals from Mikael Lustig, Georgios Samaras and James Forrest put the game beyond the Reds before the second leg. The Hoops won the return leg 2-0. This Friday, another Irishman will manage Celtic against the current Danske Bank Premiership champions as Brendan Rodgers brings the Scottish kingpins to Windsor Park.

However, the fanfare and jubilation which greeted Celtic’s last trip to Belfast has been replaced with anger and frustration at security fears which has led to Celtic refusing to take up their ticket allocation for the first leg.

Originally scheduled to take place on Tuesday, the game was moved to Friday with a 5pm kick-off due to the ‘Twelfth’. However, the change of date, didn’t satisfy Celtic chiefs who expressed ‘security concerns’ in a brief statement.

The move was roundly condemned by supporters groups including the Green Brigade and the Celtic Trust. Local supporters groups have also expressed their disappointment at the decision. It is now feared that hundreds of Celtic fans will purchase tickets online for the game with scores of tickets already available on resale sites. On the pitch, Celtic are overwhelming favourites to progress to the next round.

Despite being a universally popular choice to replace Ronny Delia last year, Rodgers’ tenure got off to the worst possible start when they were surprisingly beaten 1-0 in the Champions League second round Qualifier to Gibraltar’s Lincoln Red Imps.

Celtic recovered to make the group stages, while domestically, the Hoops were unbeaten in all competitions last year, securing a fourth treble in the club’s illustrious history. That scare in Gibraltar, almost exactly one year ago, will surely help guard against any complacency in the Celtic ranks.

The lack of an away support will generate a hostile atmosphere for the Scottish champions and Rodgers will be keen to silence the crowd early on. Celtic served notice of their early-season intent with a facile 9-0 win over Shamrock Rovers in a friendly last Saturday.

Although the Tallaght men were understrength, Celtic fielded pretty close to a full team and demonstrated the huge gulf in class which exists between the two leagues. The game came at a cost however, with Celtic skipper Scott Brown limping off after just half an hour with an Achilles injury. Yet, after a week of intensive treatment, Brown is likely to be passed fit for Friday’s eagerly-anticipated clash.

Celtic are already without defender Dedryck Boyata after he suffered a knee injury in the drawn friendly against Slavia Prague earlier this month. Rodgers though, is pleased with Celtic’s pre-season form ahead of their first competitive outing of the new season on Friday.

“You are building your fitness through pre-season, but you are also trying to develop the tactical element of the team as well, and I thought on both accounts it was very good,” said Rodgers. “You know when you play games and teams like this, they are going to fight, going to work and are going to make it difficult, especially when you come to Ireland, as Celtic are held in such high esteem over here.”

His Linfield counterpart David Healy, meanwhile, admits his side will be facing a massive step up in class from their round one opponents La Fiorita. Substitute, Jordan Stewart scored a goal in the final minute of normal time in the first leg at Windsor Park before the Blues secured a 0-0 draw in San Marino last week. Healy knows his side will need to produce a vastly-improved performance over the two legs if they are to have any chance of causing a shock.

“Even though we only got through last week against La Fiorita, it seems like this game has been talked about for a lot longer,” said Healy. “We need the players to be at their maximum and they will be. I have no hesitation in saying that. “We can't play our normal Irish League way against Celtic because they can pick you off. “They have threats all over and we are under no illusions about how difficult it will be but I can't wait.

“This may be the biggest game I'll ever manage in and the biggest game they will ever play in. “Celtic will deserve the utmost respect but if we show them too much respect then we will end up more or less watching the game instead of competing.”

It is hard to make a case for the hosts lasting the pace with one of the most complete Celtic sides in recent times. Linfield struggled to overcome La Fiorita over two legs and they will do well to keep within two or three goals of the Hoops on Friday night.

It is a shame local Celtic fans will miss out on the opportunity to see their beloved team in Champions League action in Belfast. Football fans will have to make do with ‘Fanzones’ and big screen televisions in pubs across the city. Yet, an incident-free night on the terraces of Windsor park will be considered a good result for all concerned.