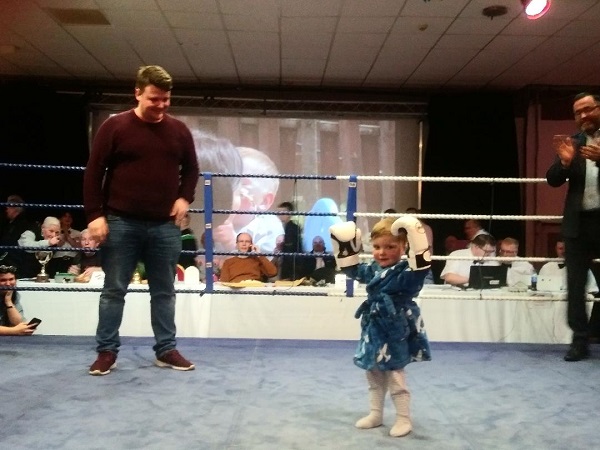 Young Dáithí Mac Gabhann in the ring with his dad Mártín at The Devenish on Thursday. The Ulster Elite Boxing Championships are supporting Organ Donation this year with collections at each round of the competition

The start of the night saw two excellent bantamweight semi-finals that were won by John Paul Hale and Colm Murphy.

First off, defending champion Hale took a unanimous decision against Monkstown's Conor Kerr, but he didn't have things his own way.

The Star man won the first with some excellent boxing, but Kerr roared back in the second with his work up close seeing him take the round.

However, Hale responded well in the final frame to box at range initially before stepping it up down the stretch to see it through.

Murphy will lie in wait for the defending champion after the St George's man picked himself off the canvas in the first round to overcome Emerald's Kane Marshall.

Like his quarter-final win over Jude Gallagher, Murphy was forced to play catch-up, but got stronger in rounds two and three with Marshall in real trouble in the final round as Murphy took a 4-1 win.

An excellent light-welterweight decider is on the cards following wins for Jack McGivern and Darryl Clarke.

McGivern overcame Errigal's Dominic Bradley on a 3-2 split decision having come through a quarter-final on Tuesday, but was full value for this win.

Boxing off the back foot, the St George's man was able to set enough traps for the aggressive Bradley to fall into with his southpaw stance giving him that little bit of extra space to counter.

It was a fairly even opener, but McGivern was more aggressive to start the second and scored with jabs, while Bradley was relying on the odd scoring right.

It appeared McGivern had pulled away in the final frame to take the win and seemed surprised when a split was announced, but he prevailed to reach Tuesday's final where he will attempt to win the title older brother James claimed last year.

"Me and Dominic have been away on trips together so we know what we're both like," he said.

"I felt fresh enough in there. My fitness is great and I didn't think I could be stopped in there.

"My brother had the trophy last year, so it would be great to get my name next to his."

In the second semi-final, Clarke recovered from a cut under his right eye to take a 3-2 split decision win over Caoimhin Ferguson.

In a gripping contest where both men were happy to stand and trade, Clarke managed to close the gap on his southpaw opponent sufficiently to emerge.

"I've been training for this for the past 12 months, so it's been a good year for me," he said.

"I won the Celtic Cup, won the Ulster Seniors and now hopefully I can go on and win the Ulster Elites.

"He was a tricky opponent, a southpaw, but we had our tactics right and it's all about moving forward into the next round now.

"The Ulster Hall is a dream for any amateur boxer, so it's all about upping the performance for the next one."

The 69kg semis went the way of Eugene McKeever and Matthew McCole who overcame Edgar Vuskans and Tiernan Duffy respectively.

At heavyweight, Immaculata's Karol Dlugosz had too much class for Thomas Maughan, while Holy Family's Michael Erpelding just about edged out Newington, Patsy Quinn's Stephen McMullan 3-2.

McMullan pressed forward throughout as both men unleashed huge shots and both looked like they could hurt the other, but the Luxembourg native who competed at last year's European Games for his country was doing the slightly cleaner work as edged home.

The super-heavyweight division saw the return of Frankie Carrothers who took on Patrick Rodgers and while the Gleann man was conceding considerable height and reach, he played his part in a highly competitive bout.

Rodgers took the first with his work slightly cleaner, but Crothers' tactics were excellent as he shut down the St John's man and when switching to orthodox in the second, he began to tie him with right hands to take the round.

However, the popular West Belfast man couldn't sustain it in the third with Rodgers boxing from range to edge home and set up a final with Dennis Boriskins who defeated William Close.

The finals take place at the Ulster Hall on Tuesday evening from 7.15pm.