Harbinson hoping to hit the ground running with Antrim 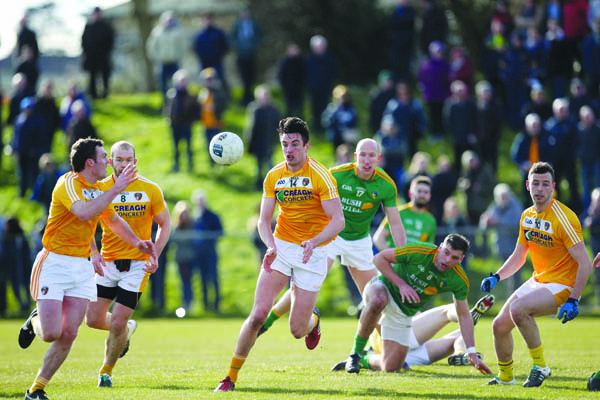 Antrim's Niall McKeever, pictured in action against Leitrim in 2016, has returned to the panel to bolster Lenny Harbinson’s squad for the 2018 season. The Saffrons open their Division Four campaign against the Connacht side this Sunday afternoon at Corrigan Park

ANTRIM begin their Division Four promotion bid with a home tie against Leitrim at Corrigan Park and new boss Lenny Harbinson knows nothing less than two points will suffice.

After suffering relegation on the final day of the league last season, Antrim are fancied by many to make a swift return to Division Three having held their own in the third tier for much of the 2017 campaign. However, the trench warfare of Division Four is an unforgiving battleground with several counties trying to escape.

Relegated to the basement division in 2013, it took Antrim three season to finally earn promotion and their stay in Division Three was a brief one. With fellow promotion contenders Laois, Carlow and Limerick providing Antrim’s final three games in a condensed league schedule, Harbinson is fully aware his side cannot afford a slow start this weekend.

“Whenever you look at Division Four and Division Three, bar maybe one or two teams, my interpretation is that they are very similar in terms of the teams that are there,” said Harbinson.

“We have four away games in Division Four this year and travelling away from home, logistically, always poses difficulties. It doesn’t make it easy. There are a number of teams in the division that would have similar ambitious us ourselves – the likes of Carlow, Laois and Limerick. They will want to kick on and get promoted and it is going to be highly competitive.

“Everybody is looking for a good start and before we look beyond what might happen, the first thing we have to be focused on is Leitrim in Corrigan Park. We have seen what they have been saying in their local newspapers over the last few weeks and everything they are doing is gearing towards the first game against Antrim.

“Everybody wants to make a positive start and get a win. Leitrim are no different to ourselves. There are two points up for grabs and we are totally focused on that task. It is the type of league that everybody is capable of taking points off each other.”

Harbinson also revealed that he has trimmed his panel down to 29 and only intends on bringing “23 or 24” players for matches.

St Brigid’s talisman, Jack Dowling is the most high-profile exclusion from the Antrim squad. Dowling, who was a frequent starter at midfield for the Saffrons last season, featured for Queen’s during the recent McKenna Cup. Yet, Niall McKeever and Sean Burke’s return to the county fold increased the competition for places in the middle third.

While Harbinson says no further changes will be made to his squad during the league, the door remains open to players to return to the fold in the future.

“We had 34 or 35 players on the panel and our sole focus over the last few weeks was to give those boys game time to have a look at them,” added Harbinson.

“You can play in-house matches and whatever, but it’s only when you have a competitive game that you learn about the players. From that perspective, the McKenna Cup was useful. We were also able to see where we are at in terms of some of the things we have been trying to do.

“We will keep an eye on players who have been with us when the club season starts to see if they can make a contribution when it comes to the Championship. If not this year, they aren’t forgotten about and we are looking to what we can do over the next two or three years.”

While Harbinson’s tenure is still in its infancy, the former St Gall’s All-Ireland winning manager is keen to put his own
stamp on the team.

A number of managers, especially from Ulster, have hinted at adopting a more attacking style of football for the forthcoming campaign after provincial champions Tyrone were handed a lesson by Dublin in last summer’s All-Ireland semi-final. Only the Red Hands and Donegal, who will contest the final next month, scored more than Antrim in the group stages of the McKenna Cup and Harbinson insists the key is trying to strike a balance between an attacking formation and a defensive one.

“I think the way the game has evolved over the last number of years, it is about defending in numbers and attacking in numbers,” added the Antrim boss.

“Any team which just sits back and defends and doesn’t have an offensive game-plan will struggle. Slowly but surely teams are working out a way around packed defences through having patience and whatever else. When Donegal brought it to the fore against Dublin, they had 14 outfield players behind the ball and it was a shock to the system. That was seven or eight years ago, but teams are now used to that style of play.

“You have to have the balance and that’s what we are trying to work on at the minute, but it is easier said than done at times.”

Harbinson added that defender Conor Hamill will miss Sunday’s game after picking up a knock in training, but expects to have an otherwise full panel to select from.

Leitrim, meanwhile, will be without their star attacker Emlyn Mulligan for the beginning of the season as he continues to recover from his third cruciate injury sustained last year. The Connacht side have failed to mount a genuine promotion challenge in recent seasons and finished fifth in Division Four last spring so it is difficult to envisage anything other than a comfortable home win for the Saffrons on Sunday.