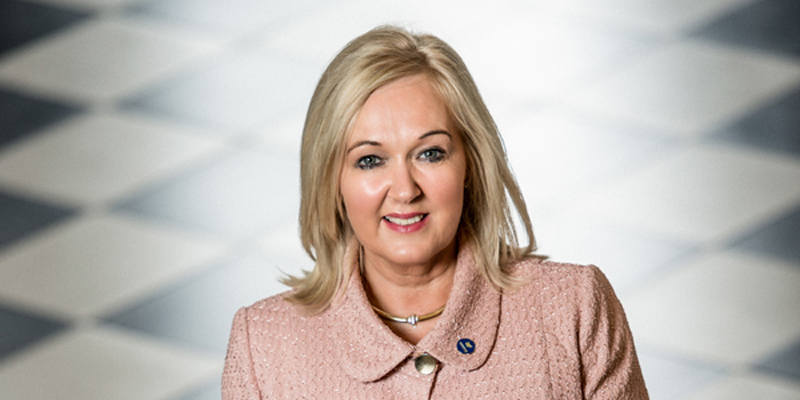 HAZELWOOD Integrated College is set to bid farewell to Principal Kathleen O’Hare after six years in the role.
Mrs O’Hare took up the role in 2012 and has witnessed a significant rise in academic achievement to Hazelwood becoming a top non-selective school in the North at both GCSE and A-Level. A former Principal of St Cecilia’s College in Derry, she has been a headteacher for 16 years and in the teaching profession for 35 years.
Mrs O’Hare as a former Head of Careers always maintained her keen interest in promoting careers education. The unique opportunities she has spearheaded have ranged from ‘Hazelwood Goes to Work’, where all students have visited a workplace for a day to the recent introduction of an Internship Programme into sixth form in conjunction with Deloitte.
Mrs O’Hare was also influential behind the creation of two groups – ‘L’Oréal Girls’ because as the motto said ‘You’re worth it!’ – and the ‘BBG – Breaking Barriers Group’ – both created for the pupils who needed additional self-esteem in order to achieve.
In the last 16 years Mrs O’Hare has received many accolades from being UK Headteacher of the Year in 2009, Blackboard winner of Headteacher of the Year in 2017, to being given the Freedom of the City of London and made a Fellow of the International Peace School at Messines for her work in peace and reconciliation.
Commenting on her farewell Mrs O’Hare said she will take with her many memories of her time as Principal of Hazelwood Integrated College.
“I have mixed feelings, as whilst I strongly believe every leader should leave when their goals are achieved, I will be sad to leave our lovely students.
“The children of North Belfast are forthright and genuine young people who display a real warmth and welcome to staff and visitors alike.
“They have a great pride in their community and I will miss being greeted by the older students with a cheerful greeting of “Right Miss” in the mornings as well as the genuine concern that the staff and the Board of Governors have for the academic pastoral and academic progress of our pupils.
“Hazelwood is a college that punches above its weight, it embodies the very essence of what we hope to achieve in a new Northern Ireland. At Hazelwood we have a lot to be grateful for and never for one minute should we doubt the difference we make in challenging ourselves and others not to accept easy answers or just to go with the flow.
“Facta Non Verba (Action Not Words) is our school motto and this is exactly what I see happening every day in an area in North Belfast where children of all faiths and none from over 50 primary schools still cross the divide to be educated together”.
Although Mrs O’Hare will be saying farewell to her role as Principal she will continue her role on the Governing Body of Belfast Metropolitan College and the Council for Curriculum, Examinations and Assessment, CCEA. Mrs O’Hare has also been invited by the British Council to speak internationally about school improvement.
In September 2018, Hazelwood Integrated College will commence a new chapter as they will welcome its fifth Principal, Ms Maire Thompson.
Mrs O’Hare leaves Hazelwood Integrated College with the message “a college like Hazelwood has many leaders in our student body as well as staff, parents and governors”.
“I wish Ms Thompson, along with the Senior Leadership Team, staff and the Board of Governors well in the continued success of the college for the benefit of our students.”
Chair of the Board of Governors, Mr Trevor Parkhill added: “Mrs Kathleen O'Hare has provided inspirational leadership for Hazelwood Integrated College over the last six years. She has developed the school in a number of key areas, not least in providing a balanced curriculum that effectively prepares pupils for their future careers, wherever and whatever it may be. On behalf of them, the staff, the parents and the Board of Governors, I extend our warmest thanks and best wishes to Kathleen”.