The courts and police are our servants, not masters 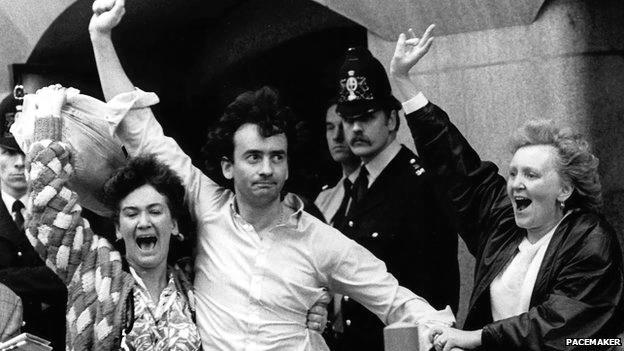 I enjoyed the movie In the Name of the Father, although I’m not sure ‘enjoyed’ is the word to describe such a sad, brutal story. But at one point I felt a little cheated. That was when the Guildford Four emerged from prison and Gerry Conlon ran to to the waiting microphones and cameras. Not because his impassioned speech about the death of his father in prison and the innocence of the Birmingham Six and so many others – not because it wasn’t well-acted. I felt there was something flat about the scene because I’d seen the real thing so often on TV and no actor, nothing could compare with the rawness and anger of the real Gerry Conlon on that day.

Since his death last week a number of interviews with him have been resurrected, and it’s poignant to read them. In one, he talks about what they faced in prison. Their food came to them having been pissed on, defecated on, sometimes with glass sprinkled in it. Their cell door was left deliberately unlocked, so that those who wanted to were able to enter with socks full of batteries and beat them again and again.
All this physical abuse being facilitated by the authorities, against the background of the death of Conlon’s father and the aching, raging awareness that they had done nothing to deserve this. Well no, let’s correct that. They had done something. They’d been Irish. They’d been Irish and available at a time when the police had needed convictions for those pub bombings and it was easy, in the wave of hatred which drowned England at the time, to stitch up the Irish group that included Conlon.

And so fifteen years of their lives was taken from them. I’ve always wondered how innocent people like that keep their sanity. To sit in a prison cell as days become weeks and weeks months and years, with the prospect of freedom at best a vague, distant hope. Lesser men would have gone mad. I would have gone mad, I’m sure. And apart from a dedicated few, the rest of the world let it happen. No smoke without fire. If they weren’t fully guilty they were bound to be half-guilty. But somehow they survived and the truth was forced into the open. Outside prison, Conlon found life even harder to deal with than it had been inside.

It’s little wonder and looked to dull the pain through drink and drugs. But even these he overcame, to campaign tirelessly for people like himself who had been imprisoned, not because they were guilty but because it suited the authorities to lock them up.

And that’s where the real obscenity lies. People talk about supporting the police and the judiciary system, and so we should. Every society needs police, every society needs judges. But we must not forget and they must not forget – they are our servants, not masters. We pay them. They’re our employees. And yet, in the case of Conlon and the Birmingham Six and other cases like them, the police and the judiciary showed themselves capable of doling out injustice without batting an eye. Which is why we should be suspicious of those who tell us we must always support the authorities. No we shouldn’t. We should watch the authorities, see that they do their job for which we pay them, call them to account at the first sign of corruption. Of course a police service and legal system are necessary. But given sufficient public hysteria and maybe because they’re human, they are capable of lying and lying and lying again. Gerry Conlon knew that. Ar dheis Dé go raibh a anam – May he rest in peace.