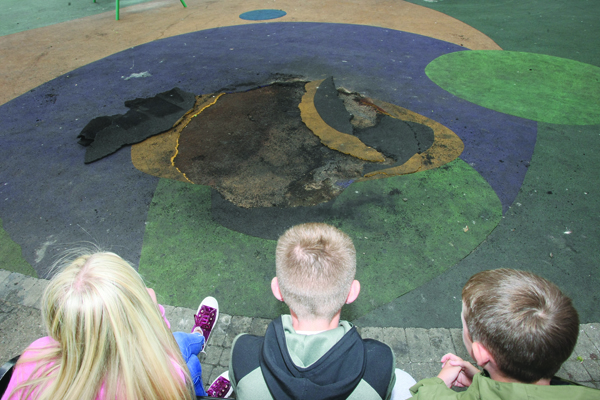 SINN FÉIN Councillor Claire Canavan has slammed those responsible for vandalism at a local children’s play park, which was temporarily closed to the damage.

A group of youths gathered in the park over the weekend after closing and set a wheelie bin alight in the play area. Calling on those who are vandalising Dunville Park, especially the children’s play area, to cease Cllr Canavan said: “This wilful destruction deprives children from using this much-needed facility as it forces Belfast City Council to close the park until repairs are completed. I have been in contact with Belfast City Council to urge them to expedite the repairs – something that they have guaranteed.

“I will also be raising this issue at this week’s Dunville Park Management Committee meeting so we can discuss ways of preventing these ongoing attacks on the park.”

But padlocks and gates did little to deter local residents from enjoying the facilities this week as children and parents gained entry to play on the swings just metres from the scene of the vandalism on Monday afternoon. One parent told the Andersonstown News: “People rely on this park when the kids are off school in this weather but it’s only going to get worse.

“This constant vandalism is absolutely ridiculous. It’s an ongoing issue which I think is partly due to the fencing being so low and I believe that there should be someone here looking after the park.

“I spoke to one of the repair men who told me this is the seventh time this year. I know realistically we can’t have people monitoring the park all the time but some presence is better than nothing.”

Another resident agreed, adding: “It’s just strange that these older kids want to do things like this. Who in their right mind thinks lighting a bin on fire in a children’s park and standing around it with a few cans is a good time?

“I understand the park has been locked for health and safety but if one side is fine I’m not going to stop the kids enjoying themselves because of these vandals but not all kids can get in and action needs to be taken to ensure this doesn’t wreck this for the children here.”