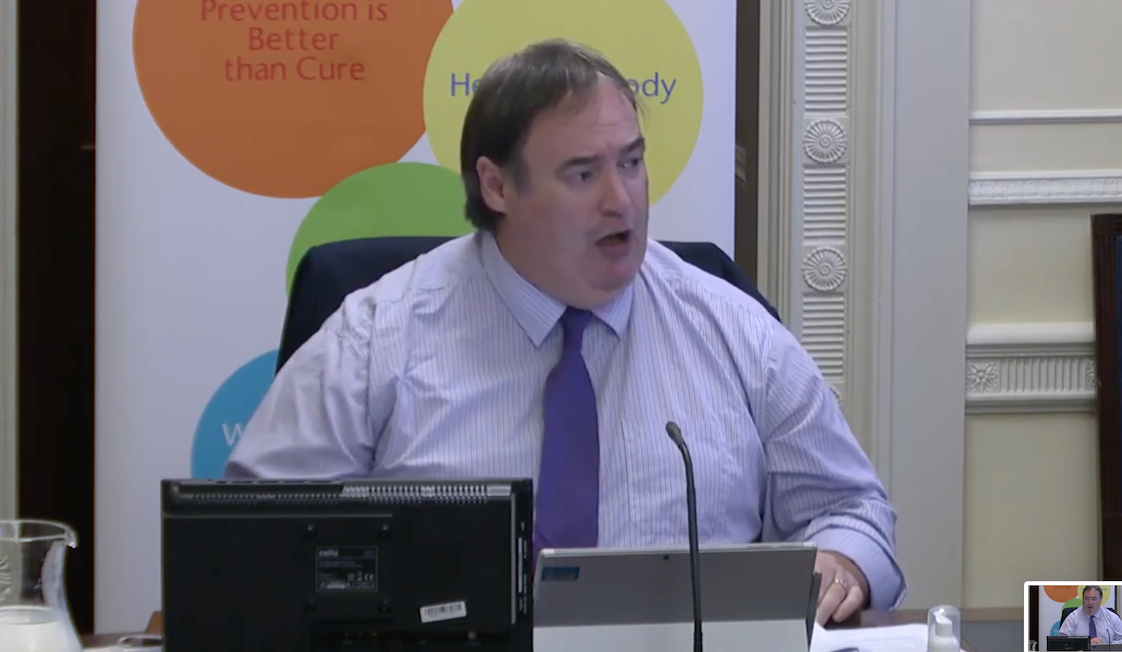 This may be the beginning of the blaming game in case there is an inquiry?

Arlene referred to St. Agnes’ as a ‘chapel’, after all the work that Father Cunningham RIP did over the years to build it into a beautiful church.

So in addition to washing of hands parity of respect should be maintained.

As usual we want to investigate one funeral rather than all the funerals which may have been the result of how the pandemic has been managed.

Hopefully Nigel on Paddy Raff will have something to say on BBCNI TV at 9.30pm tonight (Friday) if you are not rushing off to avoid the Tiny Twalfth.

This week at the Health Committee, the chair Colm Gildernew of Sinn Féin  advised that he had attended a British Isles group which had focused on zero Covid and maximum co-operation between the islands.

As well as our static drive-through COVID-19 test centres in #Belfast, #Derry/#Londonderry, #Enniskillen & #Craigavon, we have 3 mobile testing units which are currently in #Downpatrick, #Ballymena and #Lisburn.

Alan Chambers (UUUP) asked if some members had left the last meeting to attend a funeral but he previously has wanted to concentrate soley on health matters.

The acting Chief Dental Officer Michael Donaldson  and Paul Montgomery from Health Policy attended by video to brief the committee.

The acting Chief Dental officer outlined the number of dentists and the arrangements for PPE during the pandemic. They were aware of oral health and had an Oral Health Improvement Group. He did not agree with the British Dental Association that there had been a systems failure. He was questioned on how PPE was being sourced by Gerry Carroll (PBP).

Paula Bradshaw (Alliance) wanted to know about the post-surgery fallow period and on what scientific evidence it was based. There was concern that sex discrimination was being practised in relation to maternity leave.

Alex Easton (DUP) asked about fit testing and PPE. Colin McGrath (SDLP) returned to the evidence and to morale and the need to communicate even if there was nothing to relay. There was a feeling among some members that the acting Chief Dental Officer should challenge some of the evidence from London and not blindly follow it and was it always relevant to northern Ireland.

Pat Sheehan (SF) felt dental care was sub-optimal and that this was very relevant to his constituency of west Belfast and what was being done about the inequalities in oral health. Michael Donaldson said he had been in post since April and had not been able to do much other than pandemic work but he had noted that the number of general anaesthetics for children had halved since 2004.

Paula Bradshaw (Alliance) felt they had not engaged with the sector and Órlaithí Flynn (SF) felt that hey had not been prepared.

The committee went on to consider health protection regulations in relation to international travel and to northern Ireland.

Ms Elaine Colgan Chief of Staff to the Chief Medical Officer attended to brief. She was asked if there was data sharing with the south and stated that with contact tracing there was. Paula Bradshaw (Alliance) asked about exemptions for road hauliers and carriers and about a possible ban for GB. Nigel Hamilton Chief Environmental Health Officer attended again and was asked about a regulation on 29 June which was hurriedly enacted in the evening and was asked why and further about regulations with regard to funerals.

It was proposed that the committee dissociate itself from two members who had attended a particular funeral. Gerry Carroll (PBP) stated that he was not so much worried about outdoor events but people being asked to return to indoor work.  A debate ensued and it was agreed to refer the matter to the commissioner for standards. The committee went into closed session to discuss the care home regulator review and its terms of reference.