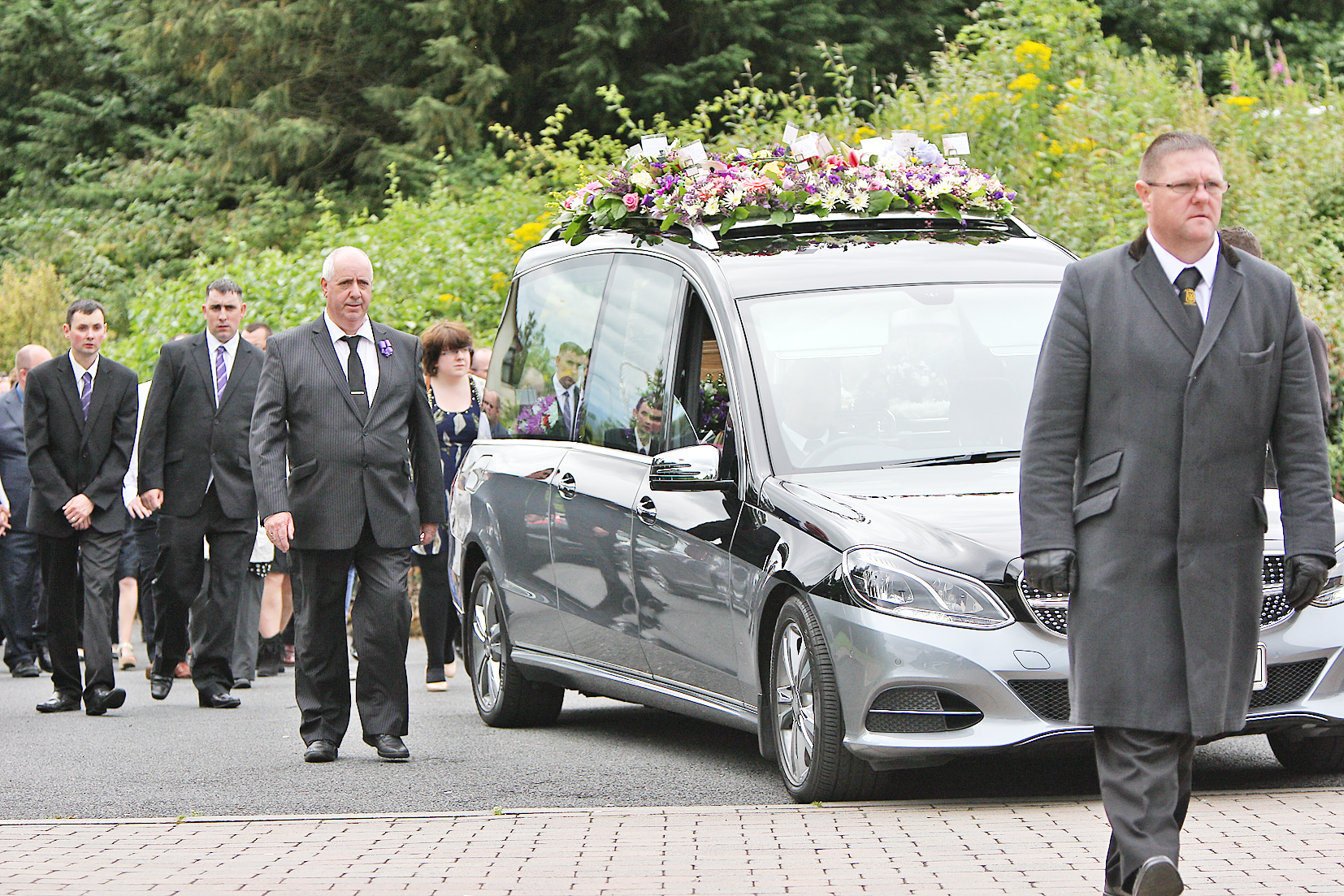 THERE were heartbreaking scenes in the Colin area of West Belfast on Monday as mourners gathered for the Requiem Mass for mother-of-three Valerie Armstrong at the Church of Nativity.

Mrs Armstrong had been walking her dog in Colin Glen Forest Park last Tuesday evening when she was struck by a scrambler motorcycle. The 35-year-old Café Vaudeville employee later died as a result of her injuries.

A book of condolence and framed wedding photograph of Valerie and her husband of 11 years Seamus was placed in the church entrance as family and friends – many wearing clothing in Valerie’s favourite colour, purple – came to pay their respects.

Pupils from Good Shepherd Primary School, where Valerie’s youngest daughter Sophie is to start in September, were also in attendance along with their music teacher who led the mourners in hymns throughout the service.

Poignantly, placed beside the gifts were a pair of Valerie’s glasses, her favourite weekly magazine and mug, CDs and children’s books. The family dog that Valerie was walking the evening of the fateful collision was also present.

Addressing the congregation, Fr Pat Sheehan spoke of how the last week had been “hard and harrowing”.

“Our hearts have been heavy and our grief has been intense,” he said. “We are proud to have known Valerie, who was, as her colleagues from Café Vaudeville described her, ‘a wonderful person, wife and mother.’ Valerie loved life, she loved her husband Seamus and she was committed to their three wonderful children, Dylan, Lucy and Sophie. This was a natural for her because she came from a happy and loving family in Rochfortbridge, County Westmeath.”

Fr Sheehan described Valerie as someone who “challenged herself with difficult jigsaws and loved doing arts and crafts with her children. Valerie’s coffin is filled with beautiful pictures and painted angels made by Dylan, Lucy and Sophie to accompany her on her journey to God – painted in her favourite colour, purple.”

Fr Sheehan said that what happened last Tuesday “has robbed us of a light and plunged us into darkness.”

“What happened has shocked us, angered us and left us broken-hearted. On a sunny summer evening she went out to walk her dog in a public place but did not return alive.

Fr Sheehan continued: “I know her death was not intended but it happened, and it happened because others made bad choices. Young people made choices to ride scramblers irresponsibly in public places. Adults, maybe giving into pressure, made choices to buy scramblers for young people living in built-up areas. People need to think about what they are doing. These choices can and have devastating consequences even though that was never intended.

“What if they had to explain to Valerie’s broken-hearted parents that it was meant to be just fun?”

Fr Sheehan thanked the community for their support for the Armstrong family and those who set up a Go Fund Me fundraising page which has raised over £3,000 towards Mrs Armstrong’s funeral costs.

Valerie Armstrong was laid to rest in Blaris Cemetery, Lisburn.