‘Help me live to stay with my daughter’ 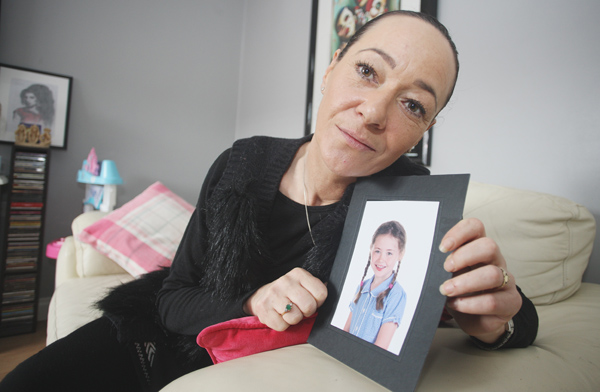 DETERMINED: Kellie McConville at her Lagmore home with a picture of her daughter Mia

A BRAVE Lagmore woman has appealed to the public for support as she battles cancer for the sake of her six-year-old daughter.

Kellie McConville was diagnosed with an aggressive form of bowel cancer in July last year, just months after her mother died of lung cancer.

Devastatingly, the tumour has since spread to Kellie’s liver and lung, but she is determined to remain resolute in her battle to survive.

The 42-year-old mum-of-one has been undergoing innovative alternative treatments at the Marinus Am Stein clinic in Germany. She now needs thousands of pounds to continue the vital immunotherapy, which could save her life.

Kellie said she believes that the alternative treatments she’s undergoing offer her the best chance of survival.

“It was an informed and educated decision not to take chemotherapy or radio-therapy, even though they told me I had just six months to live,” said Kellie.

“My mummy died in February last year and we wanted to try alternative treatments, but she took chemotherapy and I believe it killed her.”

“My body is already depleted of nutrients, my immune system is ruined, so chemo was not the way to go. I would rather be out enjoying my life than lying on the sofa sick with my child watching me. I’m trying everything I possibly can to survive, and in order to survive I need to get to Germany to get these treatments.”

Although Kellie was initially reluctant to appeal to the public for support, she became determined to survive for the sake of her young daughter, Mia. Her family have since set up a Go Fund Me page to raise crucial treatment funds.

“I was against the Go Fund Me page at the start but my family told me that they needed to save my life, so I told them to go for it,” she said. “I want to have immunotherapy, which has good success rates in cancer. All you have to do is go online to see the amount of people that are beating cancer with alternative methods. It really is encouraging for me and I have a sheer will to live. How could I leave my daughter? I can’t leave her. She’s only six.”

So far the Go Fund Me page has raised £17,291 against a target of £25,000. An amazing £3,298 of that sum was raised by one collection alone on the Andersonstown Road last November. Some of the money has already been used for Kellie’s treatment and she’s extremely grateful for the help she has received thus far.

“The people of Belfast and beyond are absolutely amazing,” she enthused. “I can’t believe the amount of people who have messaged me, called to my house, asked what they can do to help – they’re unbelievable. I feel very humbled because I’ve never asked anyone for anything in my life.”

Having arrived home from Germany just weeks ago, Kellie hopes to return for further recommended treatment in two months’ time – and has welcomed contributions from the both public and the local business community.

“We need people to come up with bigger and better ideas to raise money,” she added. “I’m fighting for my life so I need to raise as much money as possible. I know that there are businesses out there that might be able to help me and we would really appreciate their help.”

Despite the fact that Kellie is fighting her own battle, she hopes her fight can help others facing the same struggle now and in the future.

“I want to raise awareness about bowel cancer,” she said. “When I went to my GP they didn’t ‘red-flag’ me because I didn’t tick every single box in relation to bowel cancer. They told me that I was too young, but cancer doesn’t discriminate.

“You know your own body and if something isn’t right you will know about it and I was sick for a long time before I was diagnosed. GPs need to act earlier.

“Instead of treating symptoms they need to look at the cause.”