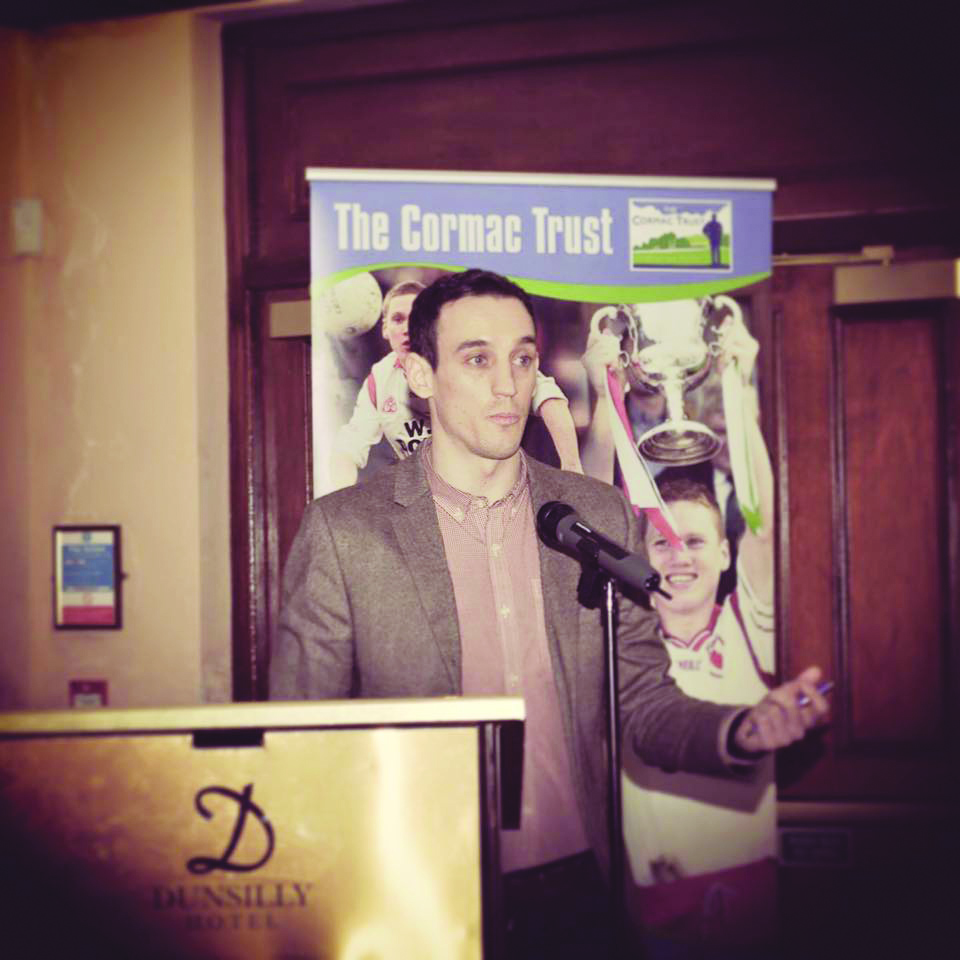 FOR an outsider looking in, the life of a professional sportsperson is the stuff of dreams. Adoring fans, endorsements and the glory.
Yes, this may be partly true, but it is far from the full story.

There are the injuries, the set-backs, the disputes and the jeers. Then one day it’s all over, so then what? For some, the transition from full-time athlete in the public eye to everyday person can be liberating, for others can be traumatic.

Adapting to the outside world after sport, or even dealing with the pressures of day-to-day life while in sport in order to improve performance is a vital area and one man from West Belfast will depart for Kuala Lumpur, Malaysia in mid-July to help some of the country’s top athletes fulfil their potential.

At 33 years of age, the Lámh Dhearg clubman has experienced a lot in life. His journey isn’t the traditional tale of a seamless transition from school, to university to top career.
He left La Salle after the first year of his A/S Levels as he felt he wanted to repeat some GCSEs, but doing so would not have allowed him to play on school teams, so a full-time job was the path he chose back then as he continued to represent club and county through minor, U21 and senior level.

However, it was a personal setback in his 20s and a hunger to take on fresh challenges that saw him embark upon a new path that has led him to South East Asia and a rising nation in world sport.

“I had to stop playing for the county after five years,” explained the former La Salle pupil.
“I came back from a spell in America and got a bad knee injury. I went through a bit of difficult time after that with depression, but I started reading about what was going on in my head and ended up going to study psychology at Belfast Met.

“From there I went to Liverpool to study sports psychology and then I did a Masters in it. During my Masters I got the chance to work with some of the Elite athletes at John Moore’s University like professional ladies’ soccer players, Olympic level athletes , development level athletes from Rugby League and Rugby Union – just anyone who was Elite.”

Life in England was good, but it was the passing of his father that saw him return home 18 months ago.

That was a naturally tough time, but it also resulted in the West Belfast native linking up with Enda McNulty, an All-Ireland winner with Armagh and a sports psychologist who works with some of the biggest names in Irish sport.

“I was working with him for about six or seven months before deciding to come back up home and start working for myself,” Christopher continued.
“The experience I got from Enda put me on a different level.”

“When Northern Ireland qualified for the Euros, I hooked up with Paul McVeigh and did a bit of work for him with professional academy players and first team players in England and Scotland.

“Through that, I met with a fella who works with the Malaysian Institute of Sport and I had been speaking to him a lot. This opportunity came up, I interviewed for it and I ended up offered with the job. It’s far too good an opportunity to pass up, to work with athletes at the top of their sport.”

These will be the main sports Christopher will be working with although his remit does not end here with athletes from other disciplines also to avail of his expertise.
But why Malaysia? Far away from friends and family, a completely different culture with a different language.

“I just wanted to take myself out of my comfort zone,” he explains.

“My motto is that you don’t really learn unless you are out of your comfort zone, so that’s why I accepted to go to a new country, a new culture, a new language, new people…. But the main reason looking beyond here is that these opportunities don’t really come up here because either athletes move abroad to fulfill their own potential or people are earmarked for certain jobs and you can’t get away from that.

“This opportunity came at a good time and I had to jump at it.”

Certainly, for someone with aspirations of reaching the top, tough decisions need to be made. But speaking to Lynch – even for a brief time – it becomes clear he has an inner calm and maturity to succeed when a challenge is presented.

His role will not be so much a sports psychologist in the traditional sense, but more a lifestyle coach who will assist athletes overcome challenges so they can be the best they can be.

“This job I’ve got is a performance lifestyle advisor which is helping athletes balance their life away from sport so they can perform.

“The job just came up. I did an interview for a sports psychology job and the director of the programme asked me to interview for this one as they didn’t have a performance lifestyle advisor in Malaysia set up, whereas in the English Institute of Sport and places like Australia, America, New Zealand and even here to an extent, they do.

“In Malaysia they have started a new podium programme for athletes that they hope will medal at major Games and they want the performance lifestyle brought in to help lift their level up and raise their number of athletes who can win medals.

“I would be more like a coach and a mentor as there are a lot of things an athlete faces outside of sport – career skills for one.
“They could be transitioning after sport where they have been an athlete all their life and then it’s time to go into the real world.

“It’s about supporting them and letting them know they have a lot of transferable skills like if they have been involved in teams, been involved in inter-disciplinary teams and how to communicate with other people, performing under pressure – there are lots of things that are an advantage to an athlete if they are transitioning into employment.

“Maybe they are starting their own business so it would be about linking them in with financial advisors to help them manage money or their brand even because at the top level, they are a brand. Social media is another.

“Some of the athletes I will be working with will be coming back from Rio (Olympics) and they will have been preparing for four years for a big competition, but then it’s ‘what next?’ for them.

“A lot of the issues athletes face is that when you have an identity as an athlete and suddenly you don’t play sport anymore, it’s almost a case of ‘who am I?’ and that’s what I faced myself, so I can be empathetic with people and who are going to face that challenge, whether they want to go to university, start a business or whatever.”

The vast majority of athletes who will take part in this summer’s Olympics will not win a medal, never mind strike gold.

For some it may be about competing, walking into the Olympic Stadium during the opening ceremony, while for others there may be crushing disappointment at a loss or perhaps they felt they didn’t do themselves justice.

Even for the winners, the high of reaching that podium can give way to a sense of emptiness as they have achieved what they set out to do and that sense of purpose is now gone.
“Even if they do really well, it’s coming down off that high and back to reality,” he stressed.

“Before everything was planned out but then people are thinking they have to do everything for themselves and they will be thinking what skills do they need.
“Well there are time management skills, conflict with coaches that need to be managed through communication. I wouldn’t be the first port of contact, but it’s almost like you’re an advisor or a mentor because if they are managing the disfunctional stress that goes on, then they are going to perform better on the big stage.

“For example, I’m a Gaelic football coach and say one of the players turns up having an argument with his girlfriend, hasn’t prepared boots properly, hasn’t done the warm-up properly, then it can take 10 minutes to get into the game. All of those are the marginal gains a top coach will talk about.”

Christopher is back helping out at Lámh Dhearg with the senior footballers and is also in charge of the senior reserves, while lending a helping hand to the Antrim U15 development squad after a former teacher at La Salle and Lámh Dhearg clubmate, Paul Buchanan put in the call.

Indeed, it is a role he says he is suited to perfectly, as helping others achieve and reach their potential is something that gives him a special thrill and it will be the athletes of Malaysia who will feel the benefit of the West Belfast native’s influence.

“My big thing is that I want to see people flourish,” says Christopher who says his journey mirrors that of his mother’s who started from scratch yet now owns her own business.

“When I played I always got a greater sense of achievement when I set someone up to score. I took that on and got a bit of advice that I get a good feeling from that so why not help other people? That’s one of the best pieces of advice I ever got along with ‘get comfortable being uncomfortable’. That’s exactly what I’m doing and this is a fantastic opportunity.”

Certainly, Christopher will be out of his comfort zone when touching down in Kuala Lumpur in July, but having overcome much bigger obstacles in his life to date, passing on his experiences and wisdom may just help other athletes live that life they all dream of.