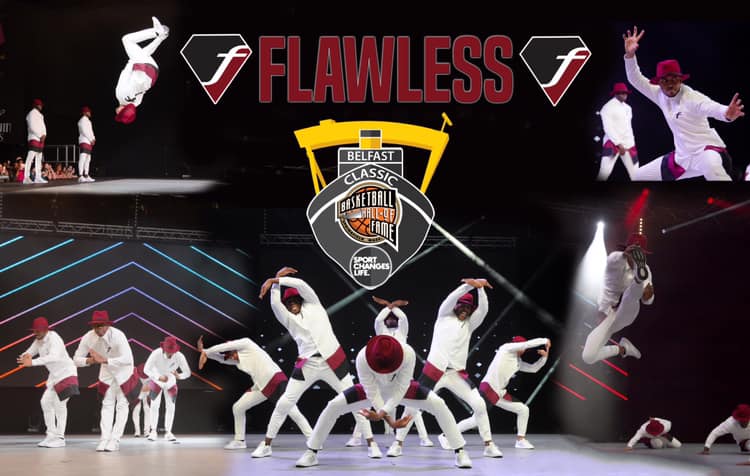 THE Basketball Hall of Fame Belfast Classic will tip off in Belfast’s SSE Arena today with the final championship games taking place on Saturday. The only NCAA Division I basketball tournament authorised to be played in Europe, the Belfast Classic this year has announced an impressive line-up of entertainment due to take over the court throughout the weekend of big basketball.

Dance sensations Flawless will headline this year’s Belfast Classic, performing as part of the half time shows during both tournament finals on Friday (7.30pm) and Saturday (3.30pm). For more than a decade, Flawless have helped to revolutionise street dance as their charismatic and sophisticated approach has enabled them to stand out from the crowd! Since appearing on Britain’s Got Talent in 2009, Flawless have gone on to appear in hit movies Street Dance 3D 1 & 2 as well as performing at the Queen’s Diamond Jubilee Concert and the Opening Ceremony of London 2012 Paralympic Games as well as working with superstars including Madonna and Beyoncé.

Flawless are continuing to ‘Chase the dream, not the competition’ and hope to continue inspiring and encouraging the next generation of dancers during their appearance in Belfast this weekend.

Local dance stars will also feature at this year’s Belfast Classic as the tournament welcomes the children and young people from Belfast-based Express Yourself Dance Company to the SSE Arena on Thursday November 29. The dance troop will perform in front of thousands of spectators expected to turn out at the arena for the opening night of the Belfast Classic.

Adding her own musical flair to the entertainment line-up, Dublin-native singer/songwriter and keen basketball player Erica Cody will also join the entertainment line-up. Combining both of her passions, singing and sport, at this week’s Belfast Classic, 21-year-old Erica will be given the honour of performing the American National Anthem centre court before the first Consolation Game of the tournament this Friday November 20 at 5pm, as well as performing a mash-up of her latest singles during the half time show.

When not on stage, Erica spends time on court playing basketball, similarly to her father Gerald Kennedy who played basketball for St Gall’s Basketball Club in Belfast in the early 1990s.
Marist College’s Cheer Team will support their basketball team as they travel from New York to Northern Ireland to take to the court for their team’s first competitive match on Thursday. Local cheer team Enniskillen Jets will make their return to the SSE Arena for the second Basketball Hall of Fame Belfast Classic on Friday and Saturday, meaning those hoping to be entertained by catchy cheers and chants as well as some of the most daring dance moves and stunts will not be disappointed!

Commenting on the diverse line-up of entertainment that will be showcased at this year’s tournament, Marc Mulholland, Executive Director, Basketball Hall of Fame Belfast Classic said: “The Belfast Classic is now just days away and we are extremely excited to welcome a fantastic range of performers to Belfast and the SSE Arena to keep basketball spectators entertained and help cheer on their favourite teams during breaks in gameplay. Acts from Ireland, Great Britain and the USA have been hand-picked by tournament organisers to showcase their talents and we believe that Belfast Classic spectators will enjoy the entertainment just as much as the basketball!”