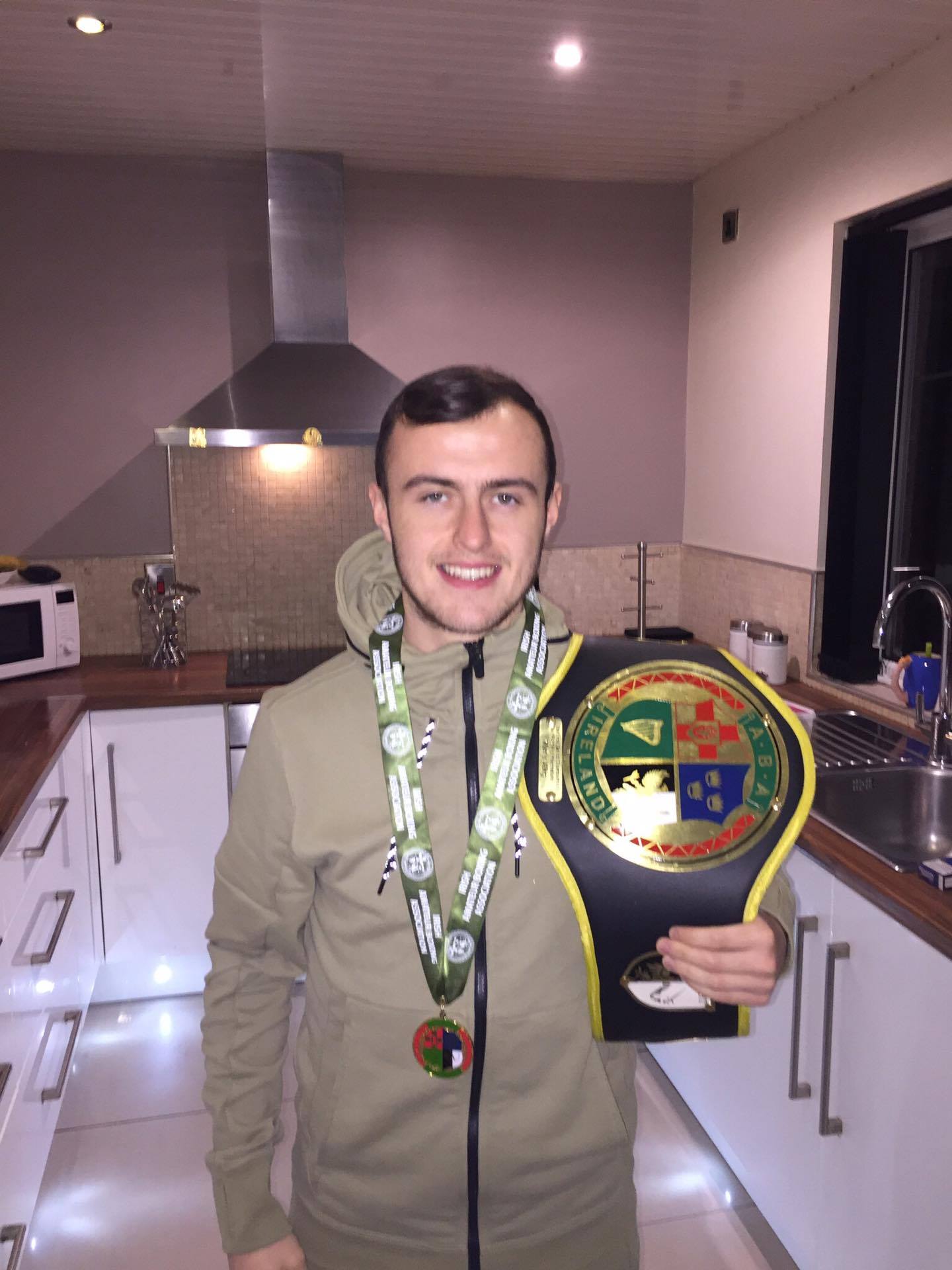 Connor Kearney, with his 49kg belt after winning the Irish Intermediate title, has blasted the circumstances which led to his opponent Leigh Moran being granted a walkover in the Irish U22 Championship in Dublin last weekend

MISSING out on the chance to represent Ireland at the U22 European Championships would have been hard enough to take had Connor Kearney lost a fight.

That the opportunity was snatched from him without stepping foot inside the ring makes the pain even greater. The Holy Family clubman has revealed a catalogue of errors led to his opponent at last weekend’s Irish National U22 Championships, Leigh Moran (Illies GG), being granted a walkover victory.

Kearney had been informed that he wouldn’t be boxing until later in the afternoon and, by the time he got to the National Stadium, Moran was being called the winner.

However, Kearney has stated that the debacle started the day before when he arrived at the National Stadium for the draw. “On Friday, we went down for the U22s and the draw was done at 2pm,” said Kearney.

“At the draw, they announced that I was fighting next week in the quarter-finals. “I went and got something to eat and checked out of the hotel. On the way home from Dublin, I checked the IABA website and found out they had me down to fight the next day (Saturday).

“We drove back to the National Stadium to find out when I am actually fighting. They said sorry and that it was down to a computer mistake. “They said I am fighting tomorrow and, because of the inconvenience and having to train again to make weight, I could weigh in at 1.30pm on Saturday and I wouldn’t be fighting until 3pm to 4pm – the 18th fight.

“We went back and rebooked the hotel. I trained and got the weight back off and went to weigh in at the normal time of 8am with everyone else. “None of the coaches or the officials said anything to us.

“We went back to the hotel to wait until it was time for my fight.”

It was back at his hotel that Kearney was soon to learn his fight had been brought forward. Staying at accommodation on the outskirts of Dublin’s notoriously busy M50, Kearney and his coach, Gerry Storey Jnr, were informed they had to be at the National Stadium as soon as possible.

An IABA official had called Gerry Storey Snr, who in turn phoned his son to inform him that Kearney was due in the ring. “2pm comes and we are starting to get ready in the hotel and my coach gets a call to say that I am meant to be fighting now,” continued Kearney.

Kearney claims his opponent and his coach weren’t interested in the fight and said that, had he been afforded just a few minutes grace, he would have fought straight away. “If they had have given me 30 seconds let alone five minutes. . . I wouldn’t have even cared about warming up,” added the Holy Family fighter.

“Ready or not, I would have fought. They moved it forward by eight fights without telling us to suit my opponent and his coach. “They wouldn’t let me fight when I arrived. It would have been different if he was getting changed or on his way home, but he was in the ring.

“They didn’t even ring us half and hour before to tell us the fight had been brought forward. They phoned us at the time of the fight when we were 20 minutes away from the stadium.”

In response, an IABA official stated that all boxers are due to register before the start of the session, which in this case was 11am. As Kearney and Storey were still in the hotel at 2pm, Moran was granted a walkover.

However, Kearney has queried why nobody called Storey at 11am to say they were needed back at the National Stadium and claimed the incident led to him questioning his future in the sport. “

I can’t go to the Europeans now. All I wanted to do his fight for my place on the Ireland team and they didn’t even give me the chance,” said Kearney.

“I wouldn’t have cared if I got beaten. It is the fact that I didn’t even get the chance to fight. I wanted the chance to prove myself. I wanted to fight for Ireland “I have been training six days a week since August – sometimes twice a day.

“I have drank once on my birthday and I watched what I ate over Christmas. “The last six months of my life have been geared towards this and they have stolen it from me.

“It is enough to put someone off boxing for life. Straight after I was thinking that I didn’t want to box again. “I will get back to training and try even harder . . . hopefully they wouldn’t do that on me again.”