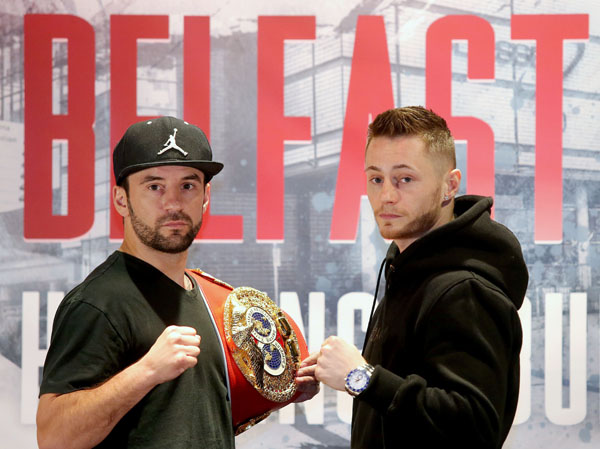 Champion, Lee Haskins (left) is in no mood to relinquish his title against Ryan Burnett on Saturday

IT has been a long and winding road for Ryan Burnett (16-0), but the four year journey as a professional boxer brings him home to the SSE Arena and the chance to claim the IBF bantamweight title when he challenges the experienced Lee Haskins (34-3) on Saturday night.

Boxing in Belfast has never had it so good. The exploits of Carl Frampton speak for themselves with ‘The Jackal’ a household name. Michael Conlan is at the start of his journey across the Atlantic having blazed a trail as an amateur, while Paddy Barnes made history as a two-time Olympic medallist as he too looks to replicate his amateur success as a pro.

Burnett has served a successful apprenticeship away from home mainly, picking up WBO European, WBC International and British belts and now he gets his chance to be a crossover star like his peers.

The 25 year-old Newington man’s story is fascinating. After being sidelined for a year due to a failed brain scan, his first four fights under the tutelage of Ricky Hatton saw two contests at home – one on a Frampton undercard before he split with the Mancunian and after a period effectively homeless when in search of a new trainer, he hooked up with current trainer, Adam Booth.

After a year out of the ring, he returned at the The Devenish with a first round dismantling of Valentin Marinov, but since then – apart from a KO victory over Csaba Kovacs in Dublin in summer 2015 – he has boxed away from home.

Burnett has not had it easy and has been eager to step back through the ropes on home soil. This Saturday, having worked his way into title contention, he gets his chance to not just win a title at home, but keep it and himself here. It hasn’t been a straightforward ride for Burnett, so victory on Saturday will be all the sweeter.

“It has been hard,” he admits.

“I live over in England away from my family and I don’t get to see them much.

“People don’t see the sacrifice I have had to make to get to this point. I couldn’t be happier that the sacrifices I have made over the past six years are now paying off.

“It’s been a few years (away), but like Eddie (Hearn) said, he has needed a big fight to get me back here.

“He has said he will have Ryan Burnet in a big fight and he’s delivered me a world title fight. He’s opened the door for me and to be honest, I wouldn’t have it any other way.”

There is no doubting the talent possessed by the North Belfast man.

His gold medal at the Youth Olympics in 2010 marked him out as a star of the future and his career has lived up to expectations so far, but Saturday is a major step-up against Haskins who is a vastly underrated champion.

The 33 year-old southpaw does not do flash or brash inside or outside the ring.

Like Burnett, he has had to work hard and make the sacrifices to get where he is today and it goes without saying, he is in no mood to lose his hard-fought title against the young pretender.

The Bristolian came back from Commonwealth and British title losses in 2006 and 2007 respectively to work his way back into domestic title level, holding the lot at one time or another before claiming European honours and subsequently losing them to Stephane Jamoye in 2012 – his last defeat.

Haskins again rebuilt his career on the small hall circuit, but his work was to be rewarded with a British title and then European before getting his shot at the IBF belt he won against Ivan Morales and then successfully defending against Stuart Hall.

“I’m starting to enjoy it now,” said Haskins of his title reign.

“Obviously, I don’t know how much longer I have left in the game, so these big fights are amazing opportunities for myself so I’m looking forward to it.

“I’m a massive family man, so this is the best way I can provide for my kids and I don’t want it to end. I’m just working hard and want to remain champion.

“I’m not in denial. I know how life goes, but you just have to keep working at it.

“I have nothing left to prove to the world. I have done everything from British, to European, to Commonwealth, to Prizefighter, to the WBA Intercontinental and now to the IBF world title so I have nothing to prove to anybody. I only do this for my family now.”

Haskins is a tricky customer, one who will exploit weaknesses and make you pay for mistakes.

This is a genuine ‘pick em’ fight with some believing Haskins’ experience will be too much for Burnett at this stage of their career’s.

“He is probably the best fighter I have come up against in my boxing career so it is a good test for myself as it is for him,” said Haskins.

“I shut them down, don’t let them work and try to do my work. I like them to come to me so I can slip and move. I will just take it one round at a time and see how it goes. It will be about who is that little bit sharper and on the night.”

While Burnett is the hungry young challenger, he mirrors the humble attitude of Haskins and is aware of the challenge he faces.

There have been no bold predictions, simply a quiet confidence and he knows it will take it best to claim the title he craves.

“How can you not have respect for the guy? He has only been beaten once in nine years so it would be silly for me not to respect that,” he said.

Burnett is without a stoppage victory since blowing Robert Kanalas away in two rounds for the WBO European title in Manchester back in 2015.

His five contests since have gone the distance with barely a round conceded and an array of opponents with contrasting styles in the opposite corner including previous foe, Joseafat Reyes whose southpaw style will surely be of benefit for Burnett on Saturday.

“I’ve fought a few southpaws in my pro career already, so I know how to adapt to them.

“If you look at (trainer) Adam Booth’s track record, he and his fighters have fought some world class southpaws.

“Adam knows what he’s doing. He has a great boxing brain and he’s not one of the best coaches in the world for nothing. He knows exactly what he’s doing so I have every faith in the gym that what he is teaching me ahead of Haskins will help me prevail on the night.”

Victory would be so sweet for Burnett given the trials and tribulations of living away from home, boxing down the list on undercards and not enjoying the fanatical support home fighters receive.

On Saturday, he gets to experience that, top of the bill and centre of attention.

That brings its own pressures, but his temperament should see him handle the occasion. The question is whether he can handle Haskins.

This just has the feeling of an occasion when Belfast gets the chance to crown a new world champion and a new hero. Burnett’s hard work can pay off and it can be his night, but like his career, there is sure to be a bump or two along the way.

“I just knew that if I kept my head down and worked hard I would get back here,” he added.

“That is exactly what has happened. I worked hard, paid my dues across the water and now I am having my own show. It’s something I’m very grateful for and very excited for.

“Knowing Belfast, it’s going to be a great atmosphere. Belfast has the type of people who really get behind their own and I think there will be a massive crowd there to get behind me and watch me win a world title.”