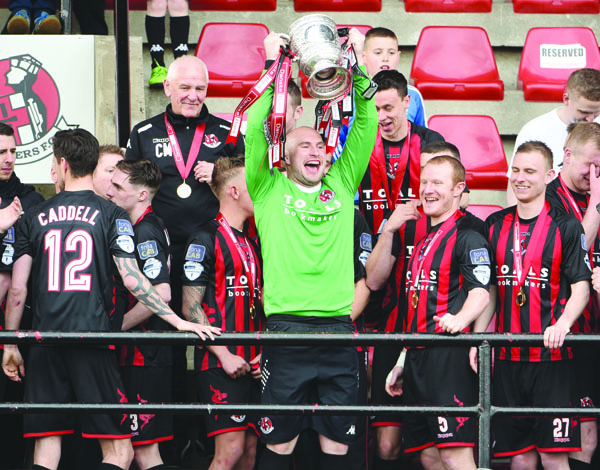 Sean O’Neill, pictured lifting the Gibson Cup with Crusaders, has been drafted into the Antrim senior football squad

ANTRIM have been drawn at home to Limerick in the first round of the All-Ireland SFC 1B Qualifiers.
The game is a repeat of the Qualifier clash between the two sides back in 2014 in the Gaelic Grounds.
On that day, the Treatymen claimed a five-point win in what proved to be Liam Bradley’s final game in charge of the Saffrons.
His assistant two years ago and current Antrim boss, Frank Fitzsimons, insisted that Limerick will provide a tough challenge but is pleased to have secured a home draw.

“It is at home which is a big plus for us,” said Fitzsimons.
“We were obviously looking a home draw but there were some teams you could never play at home – the likes of Down and those teams.
“We should be fit to hold the crowd between Limerick and ourselves.
“As far as I am concerned, Corrigan Park is our home ground. As long as St John’s don’t have anything else on that day, that’s where it should be played.
“Hopefully the home draw will bring out a good crowd.”
Pitted in the ‘B’ side of this morning’s Qualifier draw, the prospect of a fifth Championship clash with Fermanagh, subject to the Ernemen losing to Donegal this Sunday, was avoided – much to the delight of Fitzsimons and the Antrim supporters.

But the Lámh Dhearg clubman is expecting a physical battle when the Munster men come to Belfast on Saturday, June 25.
“If we had have drawn Fermanagh… don’t know what I would have done,” added Fitzsimons.
“It was good to avoid them but Fermanagh could end up beating Donegal.
“Limerick, though, are a big, strong physical side. They are a typical Munster team.
“They ran Clare brave and close in the Championship too. They have been playing in Division Three for the past couple of the years. They went down this year (to Division Four) but they still have that experience and they have a good couple of U21s in their team as well.”
Beaten 1-12 to 0-9 in Brewster Park last month, Antrim will look to regroup in the Qualifier series.

After a painfully slow start to the game, the Saffrons went in at the break trailing by seven points and, despite a second half revival, they were unable to reel in Pete McGrath’s side.
Fitzsimons knows his side cannot afford another poor showing in the Qualifiers.
“We have watched the DVD and we all know, from management down to the last player, we had a bad day at the office,” said Fitzsimons.
“I don’t know whether you put it down to nerves or what.
“We can’t really put our finger on it for certain. This is the last chance saloon now.
“There are no second chances from there on in.
“We started back training about a week and a half after the Fermanagh game and everything has been going well.”
Since the defeat to Fermanagh Fitzsimons and joint manager Gearóid Adams have drafted in some fresh blood to the ranks.
Davitt’s clubman and Crusaders goalkeeper Sean O’Neill is the most high-profile addition to the squad.

A two-time Danske Bank Premiership winner with the North Belfast club, O’Neill was previously involved with the Saffrons under Liam Bradley.
However, Fitzsimons revealed that O’Neill won’t be a back-up to first choice goalkeeper Chris Kerr, but rather an option for an outfield position.
“We have freshened the squad up a bit and it has given everyone a lift and a bit of a boost.
“Sean O’Neill from Davitt’s has been brought in but all the things have to work for him.
“We have done it with ‘Bam’ (Brian Neeson) this year. He is a goalkeeper (with Crusaders) so it can be managed from our end. We just have to sit down and talk it through.
“Sean is there as an outfield player. Hopefully things work out and he gets a run out.
“Sean is all go when he is playing and he is a good addition to the panel.”
With Sean Burke (hand) and Niall McKeever (hamstring) currently sidelined, U21 players Oisin Lenehan (Aghagallon) and Odhran Eastwood and Peter Healy (both St Enda’s) have also been brought into the squad for the All-Ireland Qualifiers.