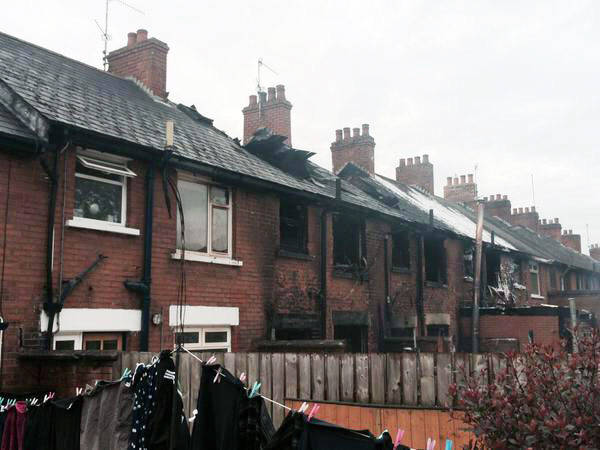 The homes in Dunmurry that were damaged by the fire

TWELVE homes in Dunmurry had to be evacuated in the early hours of Monday morning after a large fire swept through a street.

The fire started around 4am at an oil tank in Sunnyhill Park and quickly spread to adjoining houses. A spokesperson for the Fire Service said significant damage has been caused to three homes, and the roofs on two of the properties have collapsed. No-one has been injured.

Up to 40 residents had to leave their homes while fire crews worked to stop the blaze from spreading further.

Area Commander with the Fire and Rescue Service Kevin O’Neill described it “as quite a complex fire.”

“We were called initially to a shed on fire. The shed fire spread to a fence and then to an oil tank which ruptured,” he said.

“The oil from that oil tank flowed across the back of several properties setting fire to other oil tanks causing partial roof collapse on two properties.”

SDLP Councillor Brian Heading praised the work of the Fire Service and said the incident “is a timely reminder to make sure all homes have a fire alarm fitted in their properties”.

“The Fire Service deserve massive credit in dealing with this extensive blaze and ensuring that all homes and their occupants were evacuated to safety,” he said.

“I hope there will be a full investigation into how this fire was started in the first instance and I know I speak for many people and residents when I say how thankful we all are that no-one was gravely hurt or worse.”