Hyland confident his title dream will become a reality 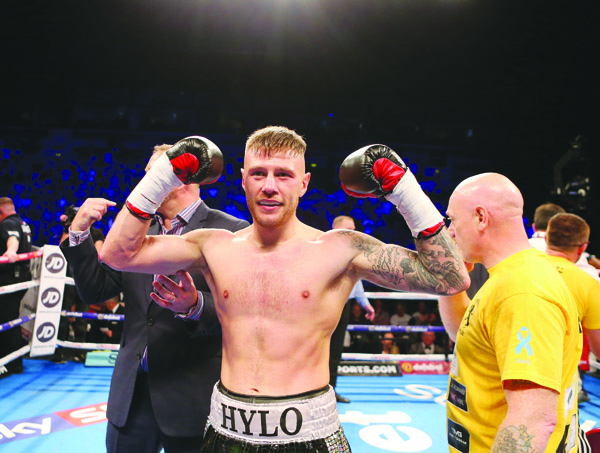 THE dream can become reality for Paul Hyland Jnr at the Metro Radio Arena in Newcastle this Saturday night when he challenges local favourite, Lewis Ritson for the British lightweight title, live on Sky Sports.

The Lagmore man first set his sights on the iconic Lonsdale Belt as a youngster when another West Belfast man, Martin Lindsay came to show off the belt after winning the featherweight title over 10 years ago and immediately, a seed was sown in the then teenager.

Now 27 years old, ‘Hylo’ had to bide his time to get his shot at the belt that will be won for keeps by Ritson should the Geordie make a third successful defence this weekend, but there is a sense of destiny going into battle on Saturday.

“This is the title I have always wanted as a kid before I turned professional,” says Hyland who has won all 18 professional contests to date including seven inside the distance.

“I remember Martin Lindsay coming into the gym with the Lonsdale Belt when he won it and I always thought when I turned pro, that’s the one I wanted to get.

“The last few years, I have always wanted a shot at it and now I have, I need to grab it with both hands.”

Like Hyland, Ritson boasts an unbeaten record, winning all of his 15 contests with nine inside the distance so it is a case of somebody’s ‘0’ has to got to go (barring a draw, of course).

The 24 year-old has impressed since stopping Robbie Barrett in seven round for the title last October, scoring early stoppage wins over Joe Murray in one round and former holder, Scott Cardle in two.

Ritson is similar to Hyland in that he likes to employ an all-action, aggressive style and this has helped him score stoppage victories of late, so a fire-fight could well be on the cards in this one.

However, Hyland points to the fact that those wins against Murray and Cardle came after both took the fights on short notice, but given he had a good camp prior to April’s win over David Birmingham (which was initially supposed to be a 12-rounder against Floyd Moore) and took just two weeks off before stepping up the pace for this weekend’s title opportunity, he says he is more than ready and that no stone has been left unturned.

“He goes in like a steam train,” Hyland observes.

“I will probably have a better boxing ability than him, but we will see what suits on the night. I will have a gameplan and see how that goes.

“He has never really been taken into the later rounds, as he tends to stop people early, but I have done the 12 rounds against (Stephen) Ormond with a broken jaw in the last four, so I will be there to the end.

“Let’s see if he can handle it and if he has the heart for it. But I am expecting a tough fight and expect him to come at me. I’m going to meet him - there will be nowhere to run.”

That victory against Ormond was razor thin, but did once again highlight the punching power Hyland possesses as he dropped the Dubliner in the third, four months after doing a first-round demolition job on Adam Dingsdale.

Under strength and conditioning coach, Michael Lyons, Hyland says he will be even more powerful and be fully prepared for whatever comes his way.

“I fought Ormond who is meant to be the hardest lightweight in this country and known as a big-hitter, but I was the one who dropped him,” he stressed.

“He didn’t really faze me when I fought him and then I stopped Dingsdale. If I had have stopped Ormond, I think there would be as much hype about me as there is about Ritson just because he stopped his last three opponents.

“I know it’s going to be a tough fight and he’s going to come at me all guns blazing, but we will see if he can take it when it’s given back to him.”

Should this fight go to the cards, fighting on away soil may give Ritson the advantage in a close contest, but Hyland is not concerned about being the away fighter and is convinced he will keep his eyes on the prize he has held I his gaze for so long.

“I’m going into the lion’s den more or less, but at the press conference over there you could tell they are real boxing fans and were coming up asking for photos and that,” he added.

“I suppose you never know what will happen on the night. They could be nice or they could boo me because I’m fighting their superstar, but whatever happens, it won’t put me off. I’ll stay focused on what I have to do and get the job done.”

This has all the makings of a classic. His stablemate, James Tennyson went and upset the apple cart in London last month when defeating a Matchroom star in Martin J Ward for the European title, but had to come through a crisis to do so.

It may be a similar story here, but Hyland has shown the strength and toughness to get to this point and it would be foolish to dismiss his chances of fulfilling his destiny in what should be a thriller between two, come-forward warriors.