‘I KNOW THE DEALER WHO KILLED MY SON’ 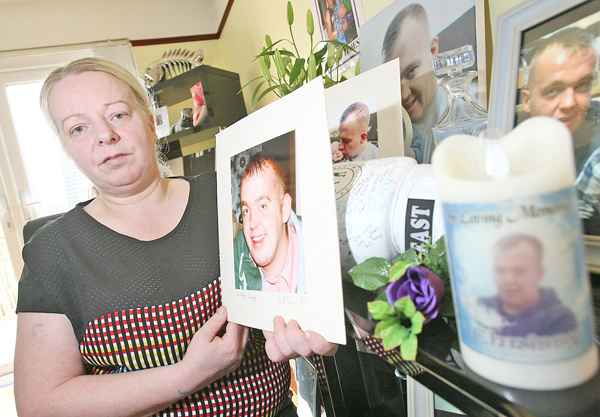 TRAGEDY: Patricia Browne surrounded by treasured portraits of her son Christopher Lavery – she says her son met his dealer on the Dublin Road hours before his death

THE heartbroken mother of a man who died from a suspected drugs related death in West Belfast last week has said her life will never be the same again.

26-year-old Christopher Lavery was discovered dead in the Riverdale Park North home of his grandparents last Monday morning. His devastated mother Patricia Browne from Lagmore said she knows her son never wanted to die and for the past six months he had started to get his life back on track.

Speaking to the Andersonstown News the grieving mother of four said: “I did everything in a mother’s power to help my son. I know people say blame the parents but no, I did everything. I intercepted his phone, I hid his clothes and shoes so he couldn’t leave the house, I even slept on his bedroom floor for fear he would choke on his own vomit. I would go onto his Facebook page and check his private messages and threaten people with the police if they sold my child tablets.”

Last week the West Belfast community was left in shock after three young people from the area passed away from suspected drugs related deaths.

“Christopher had his problems but he had a heart of gold,” said Patricia. “On the Sunday night he went to stay with his granny who was having a bad time of it, he wanted to keep an eye on her. He left my house and his last words were ‘later ma’, he came home in a coffin.

“I’m not going to sit here and say my child didn’t have a drug problem, he did. He took Lyrica, ‘Budweisers’, Diazepam – he took them all. Christopher’s girlfriend died in tragic circumstances six years ago and his life was never the same again.

“Christopher was prescribed Lyrica tablets from the doctor. He used to take a week’s dose in one go. Then as time went on he went to a different doctor and gave him a sob story and got a stronger dose. I couldn’t believe it, I was raging.

“Christopher’s addiction impacted on us all. His daddy was on the verge of a heart attack. My employers were so good to me when it came to Christopher, if I told them I had an emergency and had to leave they didn’t bat an eyelid, they understood what I meant. No other employer would have been as understanding.

“The mental health team and Dr Quigley from Lisburn worked back to back with us over the years, they couldn’t do enough. Grosvenor Road surgery were the same. I am begging on my knees to whoever has the power in this place to please open a mental health facility. To all the politicians up in Stormont stop fighting over ridiculous issues and start fighting for our kids.

“He was my baby, my child, I loved him with all my heart.  He never even had the chance to have kids. I spoilt him in life and I made sure he had the best funeral so I could say that I spoilt him in death as well.

“The dogs on the street know who is killing our children, selling them these tablets, why won’t the cops arrest them? Why aren’t they doing anything?

“The last two phone calls on Christopher’s phone are to the man he met in the Dublin Road who supplied him with the tablets. We know who he is – as do the police.”

“My son met his death on the Dublin Road as far as I’m concerned. He sent me a text at 1.30am to say that his granny had fallen out of bed but that he had lifted her and put her back in and got her sorted. By 2am he had rang a local taxi firm. He was taken to the Dublin Road where he bought the drugs that killed him and the taxi brought him back to his granny’s house.

“The taxi driver came to see me. He said my Christopher was no more than five minutes on the Dublin Road then he got back in and was brought to his granny’s. He told me he is waiting for the police to come and see him but as yet they haven’t been in touch. That taxi driver holds vital information but the cops haven’t come near him.”

Patricia says she doesn’t understand why the CCTV footage in the Dublin Road area hasn’t been checked.

“I have gone down to the Dublin Road to see for myself where my son met his death and the place is full of CCTV cameras so why haven’t the police checked them? The scum who sold my Christopher the drugs will be on camera.”

Christopher’s death has left Patricia shocked to her core as she says she truly believed he was turning a corner.

“These last six months he was doing so well, he started going to the gym, taking care of himself, doing a wee sunbed, going to the Turkish barbers for a shave and a massage. He was getting back to his old self. He said on the Sunday night that he wanted to go into rehab because he was feeling so strong.

“I used to check up on him all the time but he had been doing so well that I didn’t text him that Sunday night. His daddy found him dead on his granny’s sofa the next morning.

“I went to the graveyard at 7am on Sunday morning until 2pm. I just wanted to talk to Christopher, I promised him that I will help other young people. I don’t want anyone else going through this. If I can help one person get off these horrible tablets then maybe something good can come from this.

“No one forced my Christopher to take drugs but the people who are bringing those fake tablets onto our streets are killing our kids. I’m serving a life sentence here anyway so I’ve nothing to lose by saying that. No one understands what our home life was like. We dreaded every Christmas, Easter and holiday period any time that the chemists were closed our lives were a living hell.”

Speaking about the recent drugs deaths in West Belfast, Gerry McConville from the Falls Community Council said the events of last week have caused a lot of distress, not only for the families involved but for the whole community.

“Again I would like to give my condolences to all the families involved,” he said. “It is really important that we try to get the message out about the dangers of all drugs but in particular prescription drugs. These drugs, taken with other drugs including alcohol have a potential to be lethal. I would appeal to anyone who is experiencing problems from drug or alcohol issues to contact ourselves in Falls Community Council.”

MLA for West Belfast Gerry Carroll added: “What happened to Christopher is absolutely devastating and of course our thoughts are with his mother and the whole family at this difficult time. We desperately need a conversation in our community about the dangers of addiction to prescription drugs and the effects they are having on families and individuals. It is shocking that in 2017 we do not have a dedicated detox centre in Belfast. There should be a concentrated centre where people who are faced with addiction can get all the professional help and support that is needed. Anything short of this and we are failing people who are in desperate need of support and assistance.”

Chief Inspector Gary Reid said “Police are continuing to investigate a number of sudden deaths which occurred in Belfast last week to establish the circumstances of each case. These enquiries are still at an early stage and police will fully examine all lines of enquiry.”