"I stand over my actions", Michelle O'Neill tells MLAs during heated committee meeting 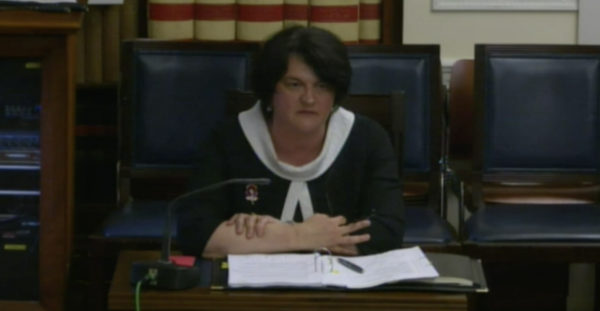 Deputy First Minister Michelle O’Neill has said that she stands over her actions in attending Bobby Storey’s funeral in Andersonstown yesterday.

The Sinn Féin Vice-President has been criticised in some quarters after several thousand people lined the streets to pay their respects to the veteran republican who died last week. Ms O'Neill was part of the funeral cortege.

Facing questions from MLAs during a sitting of the Committee of the Executive Office  – alongside First Minister Arlene Foster – Ms O’Neill said that if the organisers hadn’t provided online streaming of the funeral that the number in attendance could have been even larger. She revealed that 250,000 watched the funeral online.

Ms O'Neill said she brought in the Covid-19 regulations surrounding funerals and “I believe in the regulations”.

The Deputy First Minister said: “So in terms of what was in the gift of the organisers of the funeral yesterday, obviously church services, chapels, Masses are now reinstated. We have done a lot of really good work with the Church leaders around that partnership approach and how we can actually manage this and how we can have proper social distancing in place.

She said that hundreds of people lined the road as the cortege passed by and they were marshalled by stewards who ensured that they didn’t join the funeral cortege.

“I’m satisfied that my actions are within the regulations and the public health guidance. My actions I stand over and I think that it is really really important to deliver the public health message that we need to work our way through this and we are working our way through this, but for me certainly yesterday was a very emotional time as it has been for many people who have lost someone from this crisis.”

Committee chair Colin McGrath of the SDLP said that his party would have “loved to have a cortege for John Dallat – a true Irish patriot”. The SDLP MLA from East Derry died in May.

Ms O’Neill said that funeral restrictions had changed since then and that "we are now in a different space”.

“I do not believe that the body of public opinion is with you on this one,” he added.

First Minister Arlene Foster said she was unable to attend funerals during Covid-19 restrictions, saying that she believed the credibility of the message relating to social distancing had been damaged “as a result of yesterday”.