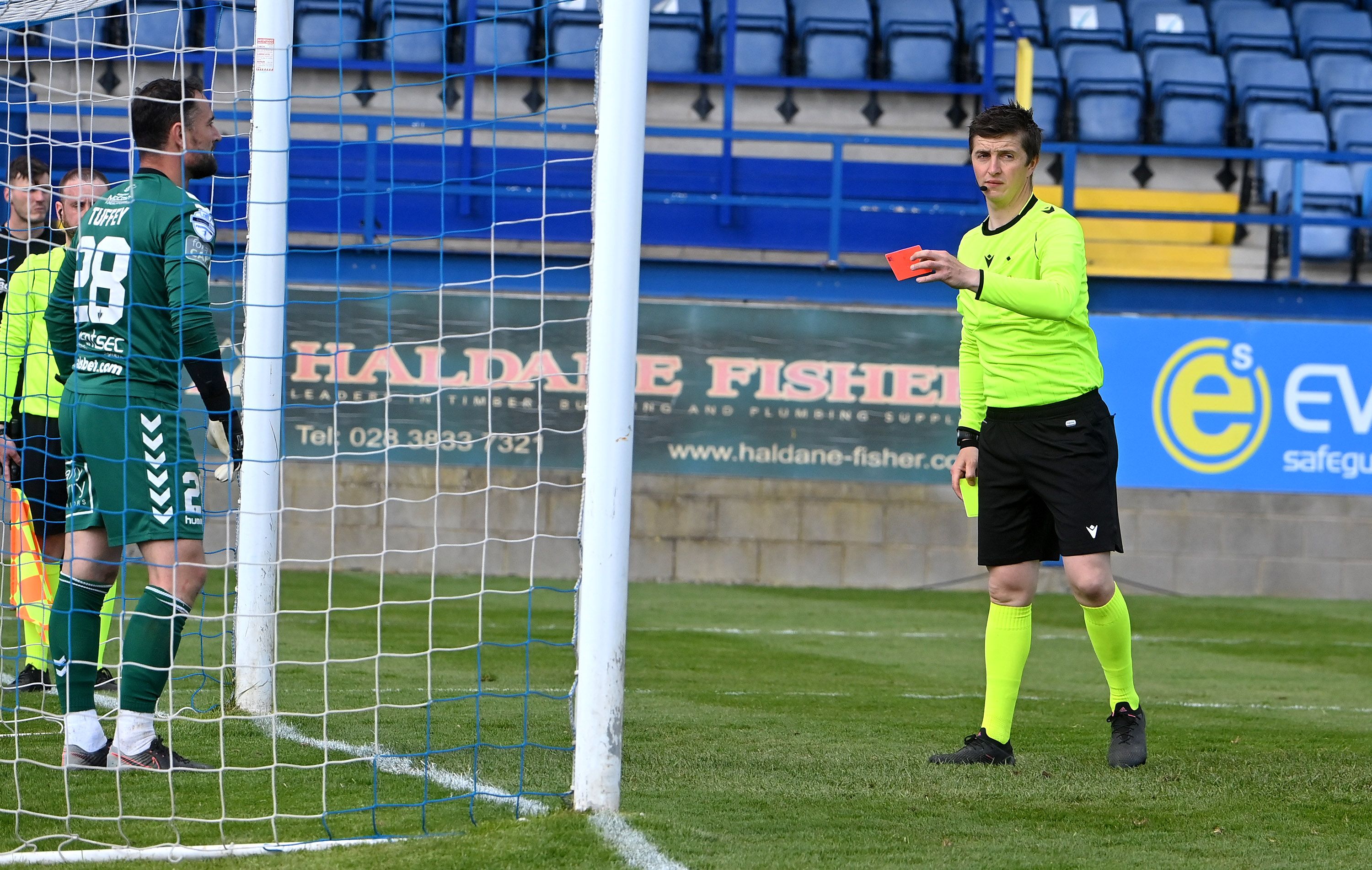 CRUSADERS manager Stephen Baxter was left fuming as his side exited the Irish Cup after an incident-packed first semi-final against Larne at Mourneview Park on Tuesday.

Gary Thomson's effort struck the bar in sudden death to ensure Larne reached Friday's final, but this was just the tip of the iceberg as Crusaders goalkeeper Jonny Tuffey was sent-off during the shootout for moving off his line before the ball was struck on three occasions. The club has since stated their intention to "appoint counsel" in relation to the incidents.

Adam Lecky was sent off for Stephen Baxter's men, but Larne could not find the winner as the game went to that dramatic shootout.

"Jonny Tuffey is on the line for two of them," Baxter insisted to the BBC after.

"To send a goalkeeper off in a penalty shootout at that moment in the game is a very sad day for football.

"When the Larne team come and apologise to you for how you have lost this game, it's a sad day for football. We've watched it back closely, it's not good. I feel sorry for the players because they were immense.

"We have had to deal with a lot of refereeing decisions today that I am not comfortable with and to see the penalty shootout go the way it did - people need to answer for that."

Larne were on top in the early stages but couldn't find the net and were punished as Hale stabbed home at the near post from Ben Kennedy's cross in from the left to put Crusaders ahead.

Lowry could have doubled the lead but headed just over as Larne escaped being punished further after failing to convert their possession into real chances with Crusaders leading 1-0 at the break.

Larne manager Tiernan Lynch made a change at the break with Jonny McMurray replacing Lee Lynch in an attempt to ignite their attack, but it was Crusaders who went closest to finding the net early when Ross Clarke hit the post.

However, Larne's switch at the break finally paid dividends when Ronan Hale was able to pick up the ball wide and cut inside to fire low past Tuffey and level.

Crusaders had their goalkeeper to tanks for keeping them level as he denied McMurray who was through one-on-one and then stoped Hale's effort from close range.

The Shore Road club would play the last 15 minutes with 10 men as Lecky was sent off for a high tackle on Fuad Sule. Larne couldn't take advantage with a Hale's late effort too high as the game went to penalties.

Both sides scored three from four when the drama unfolded as Tuffey saved from Andrew Mitchell, only for a retake to be awarded after it was deemed the Crusaders goalkeeper stepped off his line.

Mitchell tucked away the retake and Daniel Larmour responded before John Robinson was denied, but again it was deemed Tuffey was off his line and shown a yellow card.

He saved the retake but despite starting from behind his own line, he was again adjudged to have come forward and this time shown red with Billy Joe Burns taking over for the remainder of the shootout.

It appeared an apoplectic Crusaders manager Stephen Baxter wanted his players to come off, but they remained on as Robinson slotted home at the third attempt and Rodney Brown equalised.

John Herron made it match point for Larne and their progress to the final was sealed when Thompson's penalty rattled the bar to conclude a quite remarkable afternoon at Mourneview Park.

"I can only manage a football team, and put a team out on the pitch to compete and do what we are meant to do," added Baxter.

"Other people have to ask the officials how they saw the game. To put a team out of an Irish Cup final and put players out of their careers - these are careers which have spanned 10, 12 or 15 years - they may never get the chance to play in an Irish Cup final.

"To be robbed of that around a decision, you have to be so sure of your decision. To do it three times to us it's not clever and I am embarrassed for the referee fraternity because they will look at it and see it is not good."

IN the second semi-final at Mourneview Park, a brace from Shayne Lavery after Stephen Fallon had opened the scoring ensured Linfield coasted into Friday's final with an impressive win over Ballymena United.

It was a well contested opening spell with both sides trying to asset themselves with little goalmouth action of note until Niall Quinn shot straight at Ballymena goalkeeper Ross Glendinning.

The Blues would hit the front soon after as Shayne Lavery pounced on a slip by Conor Keeley to prod a ball into the penalty area from the left and with a slight deflection, Stephen Fallon followed in to poke home at the near post and give the South Belfast club a 19th minute lead.

Fallon went close to doubling his and Linfield's account on 30 minutes when hooking a shot just past the post, while at the other end there was brief moment of panic as from a Ballymena corner, the ball bounced around the area and was knocked goalwards by Keeley with appeals that it struck the arm of Jamie Mulgrew waved away.

United were starting to look threatening from set-pieces and Fallon had to be alert to head the ball away when Ryan Waide's header looked to be dropping into the net, but from a breakaway, Joel Cooper was denied by Glendinning when through on goal as the score remained 1-0 at the break.

Linfield wasted no time in extending their lead in the second half as four minutes in, Shayne Lavery pounced on a stray back-pass to roll the ball into the net at the second attempt after his first-time effort fell bounced kindly off Glendinning.

The pressure didn't relent at Linfield went in search of a third with Joel Cooper denied by the post soon after, but Ballymena had a decent chance at the other end although Waide could only find the side-netting and then a Paul McElroy header dropped onto the top of the crossbar and over.

However, the game was put to bed on 63 minutes when Lavery rose to thunder home a header from Niall Quinn's corner and he could have completed his hat-trick with 15 minutes remaining, but somehow scooped the ball over from just yards out.

It mattered little as Linfield comfortably advanced to keep their hopes of a league and cup double alive.