Irish Cup: Second half goals see Queen's get the better of Newington 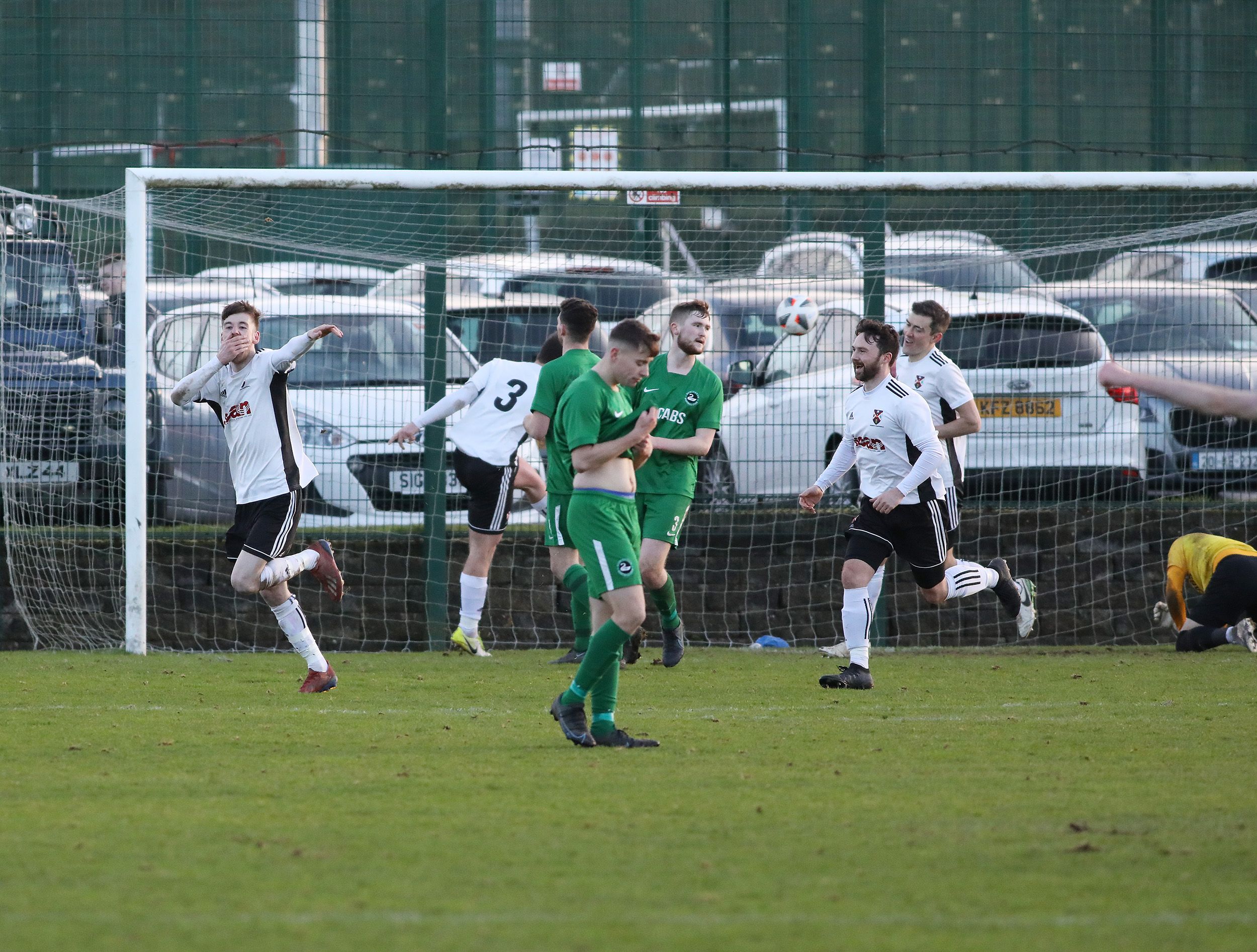 SECOND HALF goals from Marc McKenna and Caoimhin McGuinness saw Queen's book their place in Round Two of the Irish Cup as they deservedly accounted for Newington at The Dub on Saturday.

The hosts were full value for their victory and really ought to have been out of sight by half-time as four huge chances came and went, but despite there being that nagging sense they could be punished for those misses, the goals came in the second period as they they finally got their rewards.

Newington came into this game on a high with their Steel & Sons Cup success fresh ion the memory and leading the way in the Premier Intermediate division, were many people's pick to advance against a Queen's side that is rooted to the bottom of the Championship.

However, the North Belfast outfit just didn't replicate the form of late and were decidedly second best throughout this contest, much to the frustration of manager Paul Hamilton afterwards.

"We didn't turn up from the get-go," he reflected.

"The better team won on the day. They wanted it more and a few of our boys just didn't step-up. I don't know why and we'll ask questions at training on Tuesday night, but we're bitterly disappointed.

"There weren't enough players on our team today who wanted it. Maybe they were thinking Queen's would be easy and there was a bit of cockiness, but that will be addressed on Tuesday.

"We keep our boys' feet on the ground and don't let them think they're all that. We're not ones to disrespect Queen's even though they're bottom of the league (Championship). We know them, we've played them in pre-season friendlies so we know what they're about, but it'll about guys and did we turn up today? We obviously didn't."

Newington actually opened brightly enough with Aodhán Gillan dragging a sixth-minute shot just past the post after cutting inside, but as the minutes passed, Queen's began to dominate more and more with McGuinness and Adam Calvert on either being proving a threat.

The hosts were enjoying territory and their appetite for the battle was evident as they were consistently first to the breaks, but it took some time for them to start to work the openings.

After a scramble in their own box they cleared, McGuinness had a low shot well gathered by Marc Maybin in the Newington goal on 24 minutes and this was a prelude of the remainder of the half when they did everything but score.

Straight after, Chris Middleton took down a ball clipped in but his shot went inches past the left post and it was a similar story three minutes later when Ronan Young got in between two Newington defenders to control a chipped pass through the middle, but his effort also shaved the outside of the post.

Patrick Downey had a free-kick at the other end that was gathered by Ronan Doherty, but this did little to halt the Queen's momentum as they continued to press and on 40 minutes, Aodhfionn Casey headed off the line as Marc McKenna tried to pick his spot with Queen's keeping the pressure on and Calvert got his toe to the ball that looped up and onto the roof of the net.

A minute later and all were wondering just how the ball stayed out as McKenna clipped a cross in from the right with Calvert at the back able to control and thump a shot past Maybin that hit the inside of the post, go across the face of goal and his the other post before squirming out with Maybin gratefully falling on the ball and keep his side level at the break.

Newington did seem to open the second period with a bit more purpose, but the hosts would hit them on the break on 51 minutes as a long ball up the left wing saw Lorcan McIlroy get a cross in from the left and this time McKenna made no mistake, thumping home to make it 1-0.

It was not up to the visitors to find a way back and from a corner on 58 minutes, the ball was nodded out and back in with Conal Burns helping it towards Tiernan McNicholl, but he couldn't get it out of his feet as Doherty got down to gather.

Queen's had their chances to double their advantage with substitute Ciaran O'Hare given a free header straight after being introduced, but the ball was well off-target and then McKenna had a shot that dipped just wide.

At the tother end, Jack Reilly tried his luck from outside the box off a quick tee-kick, but his well-struck drive took a deflection that diverted the ball just past the post and this would prove to be the closest they would go as Queen's finished well.

Maybin was called into action to save from Ronan Young, but could do nothing about it on 86 minutes as McGuinness met Young's free-kick with a side-foot volley that flew into the net.

It could and should have been three straight after as Newington got themselves into a muddle and despite having a two-on-one, Patrick Pierce's last-ditch challenge prevented another goal, but there was no question as to who was marching on as Queen's scored what manager Peter Thompson hopes will be a springboard for the rest of the season.

"This is not flattering us, but we should have been 4-0 up at half-time," he said.

"That's been the story of our season: good players, but the problem has been in the box and that's what wins games.

"At half-time, the confidence was in their socks a bit. We were much better in the first half than in the second, but we got the goals and that's football, but that game should have been over at half-time.

"I'm not being disrespectful, but I thought we dominated that game from start to finish.

"I hope that is a bit of momentum, but we play with confidence. Our young players are a pleasure to coach because even though we're at the bottom of the league and most weeks we have been on the end of bad results, on Tuesday and Thursday nights the unity and spirit is brilliant. They have the courage to play and that is what I ask them to do."