James Connolly for a new generation 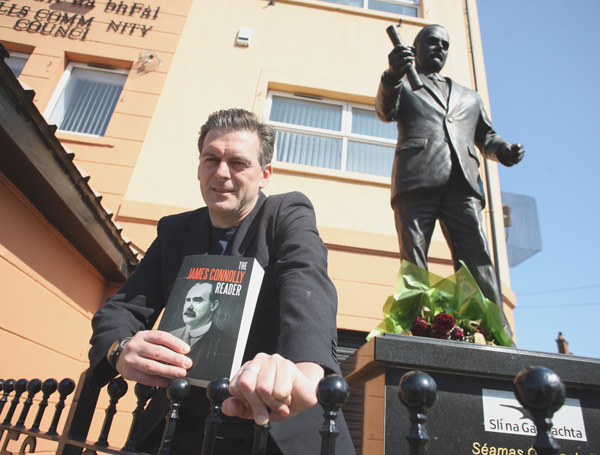 HOME FROM HOME: Shaun Harkin with his new book at the James Connolly statue on the Falls Road

A NEW book on the writings of James Connolly is set to be launched on the Falls Road this week.

The James Connolly Reader, which was written by Derryman Shaun Harkin, is a collection of some of Connolly’s best known writings.
Speaking to the Andersonstown News Shaun said he has written for many publications over the years but as this is his first book he is “quite excited about it”.

“I wrote an introduction then put together Connolly’s writings. His writings span the entire period when he was politically active from 1890’s right up to 1916,” he revealed.

Speaking about his admiration for Connolly Shaun said: “Through this book I am trying to introduce Connolly to a new generation of people.
“Things have changed here in Ireland and globally, Connolly is a global figure, there are people all around the world now who want an alternative and I believe that’s what Connolly put forward.

“He was a socialist, he came from a Marxist background and some of this has been submerged in Irish history because of the different presentations people might have wanted to make of him.

“I think his socialist vision is probably more important now than ever given the scale of inequality and austerity and given the kind of social issues that we are facing today.

“He wasn’t just someone who agitated for change, he fought for reforms that would make working class people’s lives better – be that in Scotland, Ireland or the United States. He also had an idea about a different kind of society where there could be equality and justice. This might seem utopian but I think if we look at the popularity of Jeremy Corbyn and Bernie Sanders, as well as people demanding an end to the status quo. People are looking for an alternative to the system that puts the profits of a tiny few before interests of the vast majority of people – that was Connolly’s vision.

“I think a lot of the things Connolly said are particularly relevant today, things such as partition and partition’s legacy. Connolly predicted that partition would have a toxic effect on Ireland and it very much has. I think that’s why the book will be of interest to people. I know there are a lot of books about Connolly, I learned a lot from them and I feel that my book builds upon them.”

The book will be launched in the Cultúrlann during James Connolly Week, a festival of commemorative events which has been organised by the James Connolly Commemoration Committee to celebrate the 150th anniversary of Connolly’s birth on June 5 1868.

Shaun added: “I'm delighted to be launching this new collection of Connolly's writings and speeches in West Belfast, an area where Connolly lived and worked during his time organising for the Transport and General Workers Union.”

Shaun, from Rosemount in Derry, counts Connolly as one of his heroes and has also been active in workers’ rights throughout his life.
“I went to the States as a footballer in my late teens and quickly became involved in the labour and socialist movement.

“I got involved with The Teamsters and was on strike at United Parcel Service as part of the reform movement. I lived in New York and Chicago where I was also heavily involved in the rights movement.
“I knew about Connolly when I lived in Ireland, I mean how could you not? But it wasn’t really until I moved to the US that I read about his time in America.

“While in America he wrote Socialism Made Easy. He was active in a group called the Industrial Workers of the World they are one of the most interesting and fascinating labour groups that existed in the US. He was very active in the Irish community there, he founded a group called The Irish Socialist Federation.”
The launch of The James Connolly Reader takes place on Tuesday June 5 in the Cultúrlann, at 6pm. It can be purchased from the Cultúrlann and is also available in all good book shops.