James Tennyson keen to make a statement against Jovanni Straffon 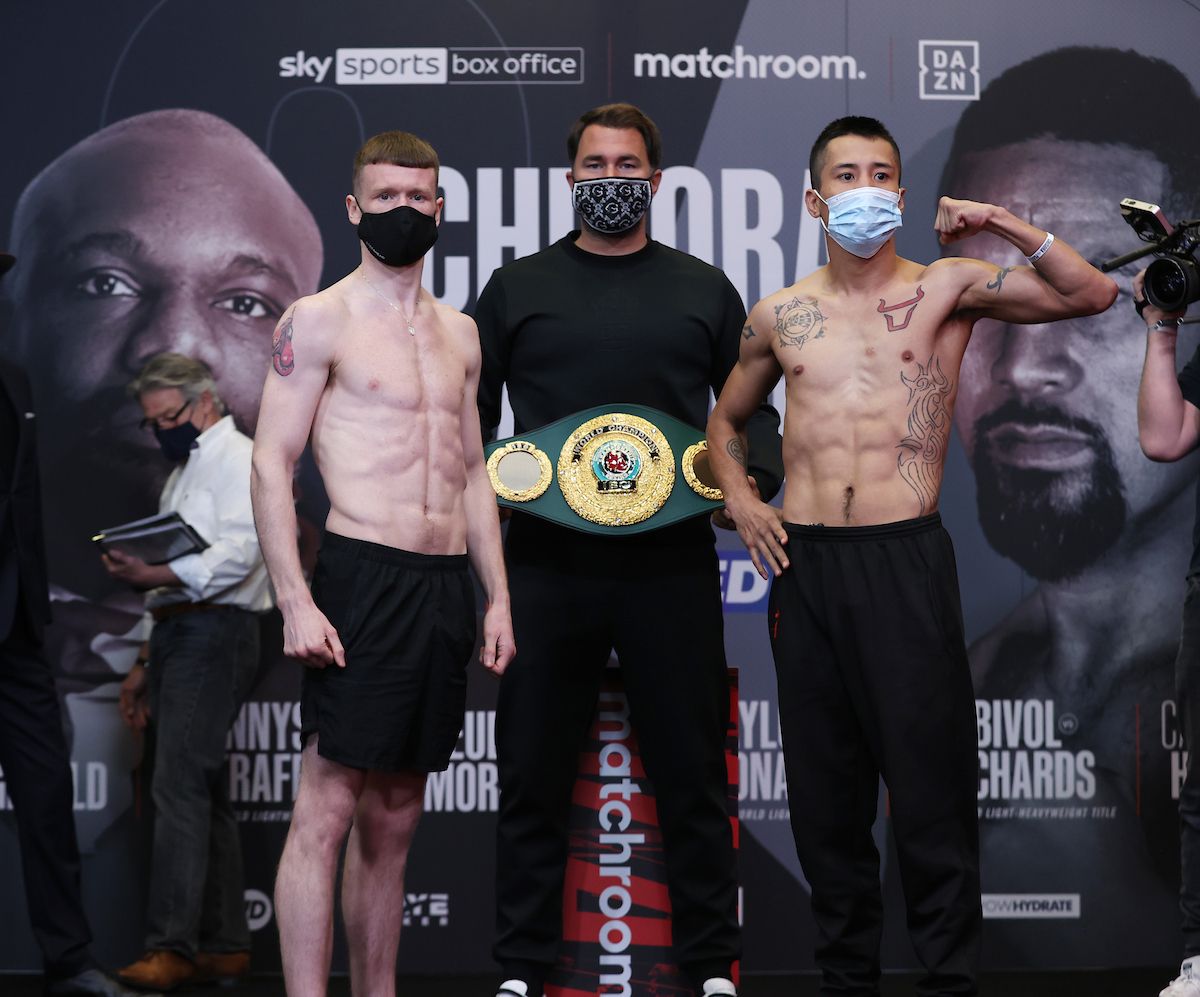 WITH six stoppage wins in as many fights since moving up to 135lbs, James Tennyson has been turning heads and ‘The Assassin’ intends to make another huge statement at the Manchester Arena tonight when he faces Mexico’s Jovanni Straffon for the vacant IBO lightweight strap (6pm, live on Sky Sports Box Office).

Tennyson’s exploits since losing out in an IBF super-featherweight challenge to Tevin Farmer in October 2018 have been enough for promoter Eddie Hearn to add him to his Matchroom stable and proclaim the big-punching Poleglass man “one of the most exciting fighters in boxing.”

That statement is not the usual promotional hyperbole as those who have followed the 27-year-old’s career know that his mild-mannered nature outside the ring is in contrast to his all-action style inside the ropes and this meeting with Straffon has all the ingredients to produce fireworks.

Initially, Tennyson had been preparing to face former three-weight champion Ricky Burns but that fight fell through late in the day with the Scot withdrawing, so a quick search unearthed southpaw Straffon who will arrive with a record of 23-3-1 and 16 of those victories coming inside the distance.

At yesterday's weigh-in, both men came in under the 135lb limit with Tennyson slightly heavier at 134.7 to Straffon's 133.2, but it was also noticeable during the head-to-head that the Mexican is slightly taller, so won't be giving away added advantages to the Belfast man who is a ferocious puncher.

Tennyson will enter as a favourite to not only win, but do it in style, but he must be wary as while Straffon has not mixed it at the top level, the man from Mexico City has a decent stoppage ratio too.

'Impacto' has a typical Mexican style and can finish well if the opportunity arises, but does appear a little one-paced if footage of previous contests is anything to go by. The question will be whether he will be so keen to let his hands go once his fellow 27-year-old finds the target in a fight that is hard to see going the 12 scheduled rounds.

While not overly familiar with Straffon, Tennyson accepts he has to be prepared for a tough test but is fully confident that his lengthy preparation will stand to him on the night.

“He is something of an unknown figure,” said the West Belfast man on Tuesday’s media call.

“He has a good record, has a good few knockouts, a bit of a banger and seems to like to have a go, so for me I just have to go in focussed and ready, which I am.

“It was a bit of a late change (of opponent), but for me it is just about being fit and ready going into the fight. I can adapt as the fight goes on and have no problem doing that.

“These Mexicans are known for their toughness. They have come here and caused upsets a few times, but I’m fit, ready and really focussed as I know what this fight does for me and what could lie ahead. I’m really confident in getting the win on Saturday.”

What could lie ahead with another impressive win is a crack at one of the top names in a division that is arguably the hottest in boxing with Teofimo Lopez, Gervonta Davis, Ryan Garcia and Vasiliy Lomachenko in the mix.

WBC champion and Matchroom fighter Devin Haney defends his title against Jorge Linares at the end of May, so with Tennyson fighting under the same promotional banner, it would seem a straightforward match to make, but there is a job to be done this weekend against Straffon.

“A big win this weekend would send out a good message to those lightweights at the top of the division,” Tennyson agrees.

“For me, getting the win here is going to put me in line to fight those guys and they are the sort of fights I want to put myself in line for, so it’s crucial to get a good win this weekend and hopefully things will take off from there.

“This weekend I’m fighting for the IBO world lightweight title and that’s one (belt) those guys don’t have.

Back in December, Tennyson wasted little time in blasting through the previously unbeaten Josh O’Reilly with the Canadian lasting just 134 seconds in the face of the West Belfast man’s raw power and aggression.

While a few rounds to showcase his array of skills to a huge audience may be more beneficial in terms of setting tongues wagging, the old saying that you don’t get paid for overtime also rings true, so should the opportunity to entertain and close the show early arise, he’ll take it.

He is also aware that the seek-and-destroy approach will not work on every occasion, so he is not relying on that style and has been constantly working on improving various aspects of his game in the gym.

“When you are moving through the levels and up the rankings, your opposition is going to get bigger and better. You have to be more careful and a bit more defensive. Behind the scenes we’ve been working on those things to bring into play.

“If I can go out, entertain and get the win then I’ll keep doing that. But not every fight is going to go like that and in some I’m going to have to switch it up.

“If they all go quick, it makes life a lot easier. But I go out to let my hands go, hit and hurt them, so if they go quickly then well and good.”

Few shots of the weigh in! Fuelling up and filling back out right and quick. More than ready for tomorrow nights war proper excited for this one!! #TeamTennyson #AndTheNew 💥👊🏼 pic.twitter.com/ZFv2lgkDxh

That fan-friendly, exciting style has already won plenty of admirers with the support rapidly growing in his home town and beyond.

The hope is that should Tennyson - as expected - deliver yet another jaw-dropping performance on Saturday, a big night back at the SSE Arena could be on the cards before the year is out and that is something that he and Belfast fans would relish.

It would also be a heart-warming prospect for a fighter who has had to do it the hard way, working his way up on the small hall circuit and fighting in the away corner on occasion.

Now it seems the tide is turning in his favour and he is beginning to reap the rewards, so that momentum should carry him to a seventh-straight stoppage win

“My aim is to bring big nights back to Belfast and I believe that winning the IBO world title is going to start that for me,” he insists.

“I don’t like to talk myself up - that’s not my style. I just like to get into the ring, let my hands go and they do the talking for me.

“Everyone is entitled to their opinion on it (IBO title) but for me, this is my big opportunity and I’ve worked 20 years of my life to get to this point.

“It will be my biggest achievement for me to date, so it will mean a lot to me to win this fight.”