JUDE COLLINS: Jeffrey’s attempt to man-up is not going well 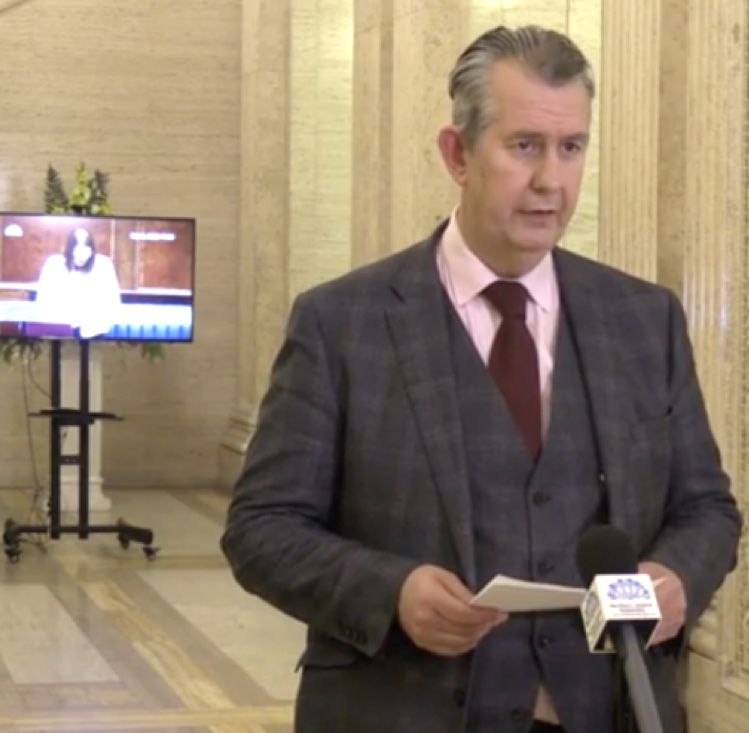 ANOTHER HEAVE: Edwin Poots makes his ill-fated attempt to end customs checks in the Irish Sea

IN any judgement on Jeffrey Donaldson’s recent exertions which collapsed Stormont  we’d do well to take note of the internal dissension in the DUP ranks. Ferrets high on acid would be friendly and cuddly compared to some of the bad blood among DUP politicians these days.

What happened could be interpreted as a kind of ricochet pattern. Faced with the bleak prospect of being Nowhere Man,  Edwin Poots may have felt the need to show how to stand up to the Brits and their infernal Protocol. So he called off border checks on agricultural goods. Then Paul Givan, seeing his good mate doing a high wire act, felt compelled to follow and announced his resignation as First Minister. This double whammy left Jeffrey Donaldson with no other option than to declare an immediate end to Stormont if the accursed Protocol wasn’t consigned to the Tory dust-bin.

The claim from DUP leader Jeffrey Donaldson that the NI Protocol is costing the NI economy £100,000 every hour or 2.5 million per day has no basis in reality and should challenged.

It could have happened in that way, with one action by a DUP Minister forcing the hand of the next one. Alternatively, it could of course have simply been that this was the time and this the hour and Edwin, Paul and Donaldson joined hands in a threesome of strength and unity.  Certainly Jeffrey was quick to assert his authority: “I’ve withdrawn the First Minister on the basis that the Protocol issues have not been addressed... I have made my position clear – I think there is now an opportunity for the government and the EU to step up.” Note the use of the first person singular “I”. “I’ve withdrawn”, “I have made clear”, “I think”.

David Trimble once famously suggested that, finding themselves in a “cold house for Catholics”, the same Catholics looked as though they wanted to burn the house down. Might that be Jeffrey’s ploy? Get that Protocol out of here or I’ll do a Samson act and bring the columns at Stormont crashing down in permanent ruin?

It could be, but that would be to suggest that Jeffrey was making hard decisions in a clear-headed manner. Given the DUP showing in recent opinion polls, it is more likely that Jeffrey was acting like a man driving a car in which the brakes have suddenly gone. Not just that, but  a number of car passengers are trying to grab the steering wheel from him. Faced with a strong green concrete wall a hundred yards up the road,  Jeffrey decided the least bad option would to bring his runaway car to a stop by wrenching the steering wheel to the left and into a tall wooden fence. There might be damage, there were bound to be injuries, but they’d be nothing compared to the total write-off awaiting a hundred yards up the road. And so, rather than wait until May, or even February 21, Jeffrey has gone for the Crash Now option.

Of course he can’t admit any of that. Instead, Jeffrey positions himself as a kind of political headmaster who, more in sorrow than in anger, has had to bang UK and EU heads together: “I’ve been patient. I gave the UK government and the EU time to make progress. I have not seen that progress.”

But even staging a Stormont crash in early February may not prevent Jeffrey’s party from ripping itself apart. In which case I’d direct Jeffrey to the words of that great imperialist, Rudyard Kipling: “If you can keep your head when all about you/Are losing theirs and blaming it on you…Yours is the Earth and everything that’s in it/And – which is more – you’ll be a man, my son!”