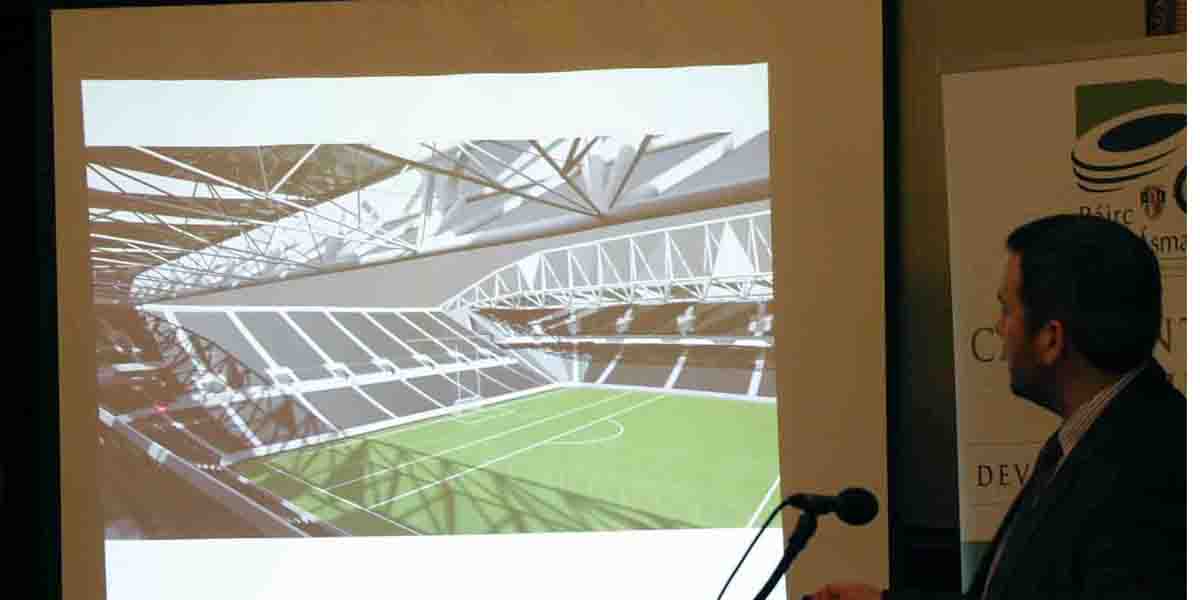 The contractors who will build the new Casement Park in Andersonstown will be obliged to give work to the long-term unemployed.

Ulster GAA have made the precondition that any building firm bidding to oversee the biggest single capital project ever undertaken in this part of the city must employ those who have been out of work as part of a so-called ‘social clause.’

It us expected 1,500 jobs will be created by the construction of the £76.4 million stadium, which will be the second most prestigious GAA stadium in Ireland, behind only the Association’s headquarters at Croke Park.

The GAA expect the new stadium to generate £15 million for the local economy every year, but it  only expects the stadium to be full on four occasions every year.

Instead, the stadium will be used extensively by local sides, for Antrim league and Championship matches, juvenile teams and schools.

“The stadium will be used by local boys and girls, the likes of an U12 hurling team, more often than established GAA stars,” said Ulster GAA Council President Aogan Ó Fearghail.

The Andersonstown community can look forward to a range of services that will be incorporated into the new design. The exact details of the facilities will not be finalised until after the current consultation process, allowing local residents and community representatives to let the designers know exactly what they want and need in the Casement Park rebuild.”

Already, Belfast City Council has promised to build state-of-the-art leisure facilities on the site, while new restaurants, bars, coffee shops and other community services are likely to feature in an effort to revitalise the Andersonstown Road area and give the local community a sense of inclusion and ownership of the new stadium.

A new Casement social club will be included in the new stadium, if required by Antrim GAA.

The plans were announced at a media briefing held at Belfast City Hall on Wednesday evening, when Ulster GAA revealed more of the design features that the Ulster Council hope will make the new Casement Park a landmark and iconic stadium rivalled only by Croke Park.

The 38,000 all-seater facility will be covered on three sides by a transparent roof, allowing light to flood into the stadium. The ‘North’ stand (the Andersonstown Road end) will have no cover meaning the trademark summer views of the Belfast Hills will still be seen from inside the stadium.

The front of the stadium on the Andersonstown Road  will be known as the ‘Plinth’ and will be a granite masonry wall, with space for commercial units and turnstiles at street level, with restaurants and bars one storey up.

Rising above the Plinth will be the transparent roofs of the stands – known as ‘The Cloud’ and on top of the stands will be the supporting trusses. These will be white and should blend into the skyline, but a unique feature of the stadium will be the inclusion of lighting effects in the roof and trusses that will change depending on who is playing. So, for example, the lights would be black and red in the unlikely event of Down winning a Championship match at Casement.

The public are being encouraged to have their say on the new Casement Park, so that all views are considered before the design is finalised.

The consultation process will last until the end of April 2013 when a community consultation report on the stadium will be published.

The plans for the stadium redevelopment will be on display at various West Belfast locations including Falls Leisure Centre, Andersonstown Leisure Centre, the Dairy Farm and Belfast City Hall.

Those wishing to have their say on the new Casement Park can submit their views by completing questions at the display locations above or by visiting www.casementpark.ie and completing the online questionnaire.

Four public events will be held over the course of March/April 2013, which will be publicly advertised with dates and locations in due course, which we will of course bring to you.