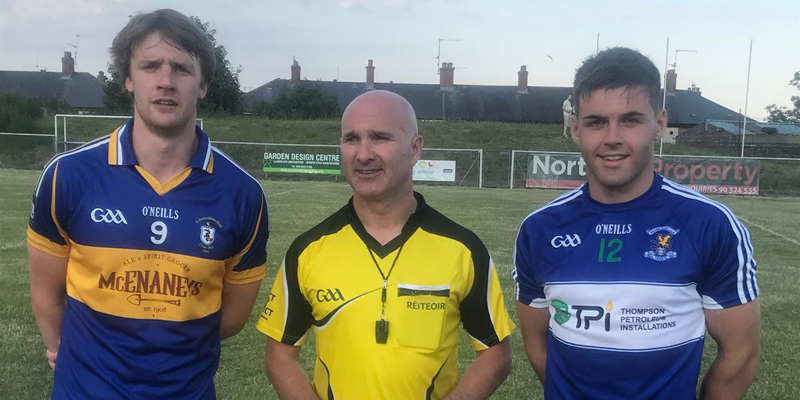 ST JOHN’S maintained their winning run as they overcame old rivals, Rossa at a sunny Corrigan Park last night with 12 points to spare.

With both sides already knowing what half of the table they would be in post-split with the Johnnies in the top half and Rossa in bottom, it was a case of pride to play for between these teams as both looked to get one over on the other.

As it transpired, the game was effectively over at half-time as St John’s had raced into a 10-point lead after a fine opening period where their pace of attack, support play and watertight defence kept the Shaws Road side at bay.

Credit to the visitors however, as they refused to simply roll over in the second period as their young side kept pace with the hosts until a late goal put the seal on things.

The game could have opened with a goal as a long punt saw the ball bounce over the head of the Rossa defence on the rock-hard surface and Brian ‘Bam’ Neeson read it well and was through, but his shot cleared the bar.

Dominic McEnhill replied at the other end, but the Johnnies looked much more fluid going forward and after Neeson restored their lead from a free, a pair of Matthew Fitzpatrick scores extended it.

Conor Johnston then opened his account for the night and while McEnhill replied at the other end, the Johnnies were 0-5 to 0-2 ahead midway through the half.

The trend had been set and on 21 minutes, the goal they had been threatening arrived as after a fine exchange of passes, Patrick McBride held the ball up, fed the on-rushing Peter McCallin who blasted to the roof of the net.

The pace of the St John’s attack was causing Rossa problems and McBride set-up Fitzpatrick for a score and then Michael Bradley kicked over a great score from range.

Rossa were almost in for a goal at the other end when Sea Pat Donnelly played an inviting ball through and Thomas Morgan got there ahead of St John’s goalkeeper, Eoghan Rua Lambert, but off-balance, Morgan couldn’t direct the ball on target.

St John’s went straight up the field and Conor Johnston was almost raising a green flag, but his shot cleared the bar, while Neeson followed up with a score soon after.

Rossa did add to their tally before the break – Micheal McGreevy kicking a good score, but McBride responded with a point after a pacey break to leave his side 1-10 to 0-3 after the break.

The trend continued after the restart although Rossa goalkeeper, Michael Byrne mad a magnificent double stop from McBride and Johnston at point-blank range although he could do little as Conor McEvoy, Neeson and Fitzpatrick – a stunning effort from long-range – moved the Johnnies 13 clear.

Rossa would still not roll over and they continued to play their game, hitting five of the next six points with Sean Pat Donnelly, McEnhill, Niall Crossan, Colm Fleming and Cailean Walsh all on target.

A pair of Neeson points inside a minute stemmed the tide, but Walsh kicked another beauty at the other end followed by a fantastic Adam Devlin effort from an angle.

However, St John’s would have the final say and Conor Johnston passed to McBride who put on the burners and cracked an unstoppable shot to the net to seal victory for the hosts and keep their winning streak going heading into the final round of post-split games tomorrow evening.