Just join in the spirit of things 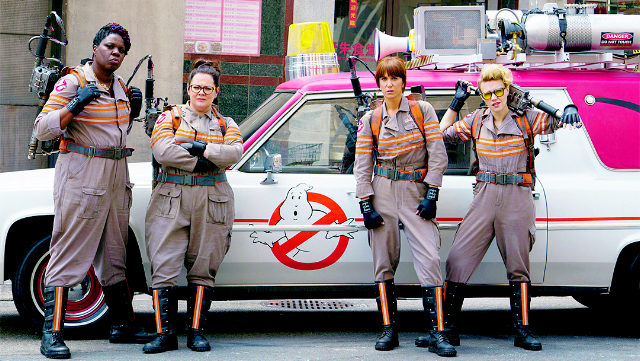 REBOOT: If you can switch your brain off and just go along with the general goofiness, then you might aswell enjoy this rehashing of the classic 1984 comedy

ERIN Gilbert (Kristen Wiig) and Abby Yates (Melissa McCarthy) have studied the paranormal throughout their academic careers, but instead of giving the spooky subject credibility, their overly enthusiastic approach has caused them to be labelled as two hare-brained crazies.

However, something very strange is stirring underneath the streets of New York City and when ghostly spirits begin rising from the sidewalk and hauntings become a regular occurrence on Manhattan’s mean streets, it’s not long before the city’s officials admit that they’ve got a very serious problem.

Teaming up with renegade nuclear engineer Jillian Holtzmann (Kate McKinnon), along with Patty Tolan (Leslie Jones), a streetwise subway worker who’s had enough of being terrorised by ghouls when on shift, these four bright, brave and sparky ladies re-establish Ghostbusters and set out to solve the mystery of why the city’s dead are reclaiming the streets.

It’s not often that a movie provokes such passionate division between movie fans and critics alike. After the promotional trailers received scathingly negative reactions from a very vocal online community, the long-awaited reboot of Ghostbusters has finally arrived – albeit nervously – and is awaiting its final, critical judgement from hordes of inquisitive fans.

The fact is, and this is usually the case with any movie release that carries the burden of nostalgia-frenzied fanbase expectation, Ghostbusters will either appease or appal you, depending on how much you care about this particular franchise.

Hard-nosed movie buffs and the legions of dedicated fan boys and girls will most probably scoff, harrumph and scorn their way through this modern-day continuation of the Ghostbusters story. Why? Because it doesn’t live up to the expectation set by the classic 1984 original.

However, those of you out there with low expectations and with the sole intention of enjoying a goofy comedy will most probably enjoy Ghostbusters for what it is.

Director Paul Feig gave us the riotous delights of Bridesmaids and The Heat, movies that boasted the comedic talents of Melissa McCarthy and Kristen Wiig. Ultimately, though, his efforts to reignite the magic of these two wonderfully successful comedies don’t deliver, thanks to a plot that spends a little too much time mirroring the storyline of the original Ghostbusters.

It just all feels a little too rehashed for its own good.

Still, the cast here do a magnificent job – it’s hard not to like McCarthy and Wiig, they’re a delightful duo wherever they pop up, and comedians Kate McKinnon and Leslie Jones bring something fresh to this band of spook-fighting sisters. Even Chris Hemsworth’s airhead male secretary is a bit of a hoot.

Forget the sexual politics and lower any high and mighty expectations you may have – the key to enjoying this Ghostbusters is not to take it seriously and just try and enjoy it for the goofy cartoon silliness of it all.

If you can’t do that, avoid it!