Lámhs keen to finish the job against reigning champions 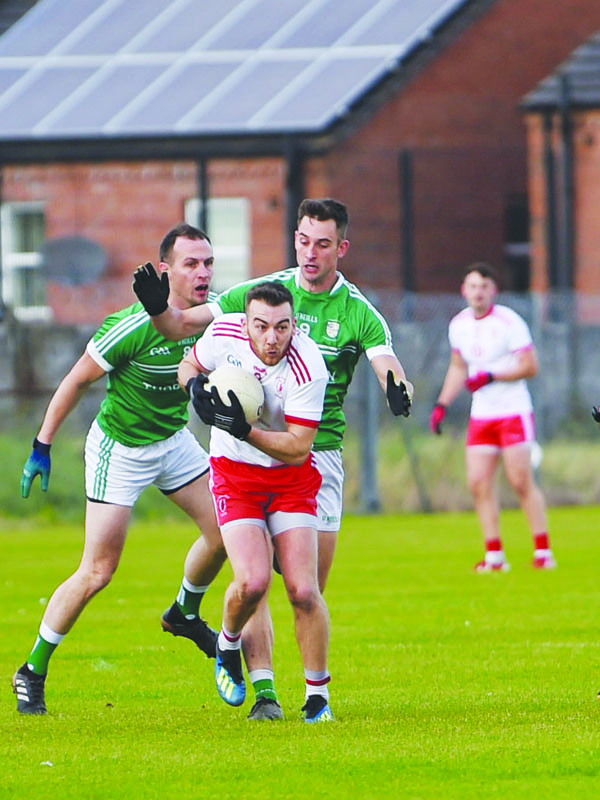 Kevin Quinn evades Gerard McCann during last year’s quarter-final replay when Cargin dethroned Lámh Dhearg. The teams return to Corrigan Park for the final this Sunday with the Red Hands aiming to redress the balance against the defending champions

AFTER a semi-final saga of which we haven’t experienced in many years, the Antrim Senior Football Championship final comes down to the winners of the past two years as Lámh Dhearg look to dethrone Cargin at Corrigan Park on Sunday.

On Monday at a rainy Ballymena, the Red Hands finally shook off a dogged Portglenone at the third time of asking following two draws and a replay that was level after extra-time and free-kicks.

There is no doubting the heart and determination of the Hannahstown men who are keen to reclaim the Padraig McNamee Cup having lost their title at the quarter-final stage last year against Sunday’s opponents after a replay.

They go into the game at a disadvantage having had just six days to get ready following their Portglenone trilogy that spanned just nine days with Monday’s victory played out in extremely heavy conditions that will have taken even more out of tired legs, so this week is simply about trying to get ready for another massive test of their resolve and skill.

They will have to do it without Pearse Fitzsimons who suffered a knee injury in the second game against Portglenone that is likely to keep him off the pitch for some time, but will take encouragement from the performance of Declan Dunne at centerfield on Monday with the big midfielder putting in a good shift that was capped off with an excellent score late in the game.

Now that semi-final is in the rear view mirror, focus is all on Sunday and a game they will be desperate to win for a variety of reasons.

Many of the current team lost out to Cargin in the 2015 final and more again part of the team that fell to a disappointing replay defeat against the Toome outfit last year.

There will be little either team will know about the other with Cargin and established force in recent times full of household names and former county stars.

O’Boyle, Scullion, McCann, Crozier, Laverty, Carron and Close are names that roll off the tongue, just are Lámh Dhearg’s established names so another exciting battle lies in store.

The match-up between Michael Herron and Michael McCann would be key, as will who comes out on top around the middle with Kevin Quinn and the returning Gerard McCann likely to cross paths.

Cargin enjoyed a comprehensive victory over St Gall’s in the semi-final where they controlled the game from start to finish and they will believe they are well placed to win a fourth title in five years.

They will understandably be fresher going in this Sunday, but it won’t take much encouragement for Lámh Dhearg to summon another huge shift and should they have recovered sufficiently from their semi-final exertions, then they are in with a fair shout of victory.

“Cargin are there and we have to try and knock them off their perch,” Lynch agreed.

“It will be a difficult job because they’re a skillful team full of county players and immense talent, so we’ll just do our best against them.”