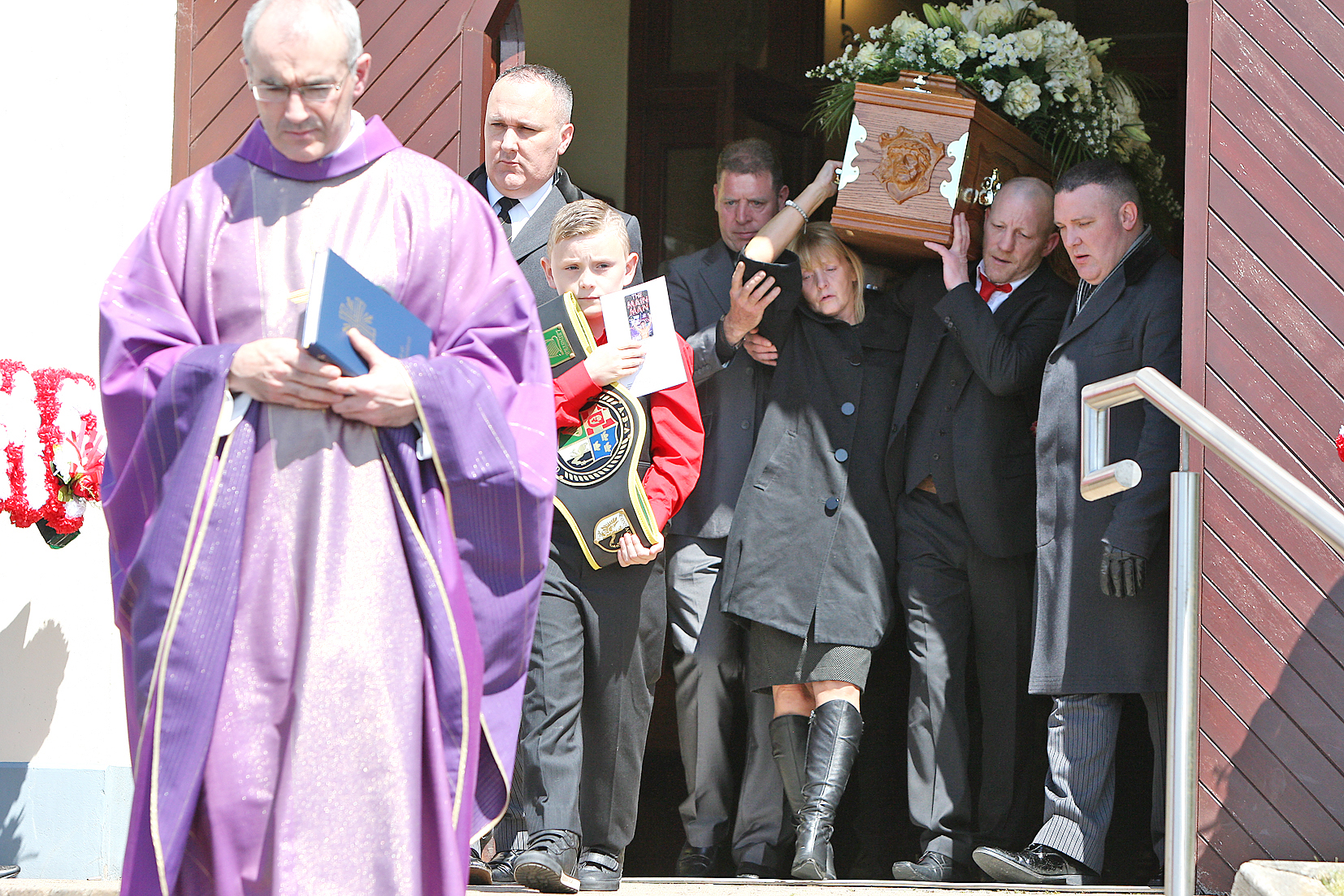 Eamonn Magee Snr and his wife Mary carry the coffin of their son, Eamonn Jnr, from St Joseph's Hannahstown, for burial in the adjacent cemetery. Leading the way is Parish Priest Father Kevin McGuckien

THE West Belfast community and boxing fraternity were united in grief on Friday as mourners gathered from early morning in a rain soaked Hannahstown for the Requiem Mass for slain boxer Eamonn Magee Junior.

22-year-old Eamonn Jnr, the son of former WBU welterweight champion Eamonn Magee Senior, was brutally stabbed to death in the early hours of the previous Saturday morning in Summerhill Park.

Parked cars stretched along the length of Hannahstown Hill as mourners turned up to pay their last respects at the Magee family home as early as 9am ahead of the 10.30am service at nearby St Joseph’s church.

Inside the church, pictures were placed on either side of the altar, one featuring a young Eamonn in his father’s arms with the title ‘Happier Times’, another from his pro-boxing debut in the Holiday Inn last year, titled ‘The Main Man’.

The picturesque church with panoramic views of the Belfast Hills was packed to capacity with many lining the walls, while many more stood outside to listen to the Mass on speakers. Some of those in attendance wore red – Eamonn Jnr’s favourite colour.

Red floral tributes reading ‘Champ’ and ‘Friend’ were placed at the entrance to St Joseph’s, while a boxing belt belonging to Eamonn Jnr was placed at the altar by his sister Áine Máire and brother Francis.

The hymn ‘Here I Am, Lord’ was sung as Eamonn Jnr’s coffin was brought into the church, carried by his mother Mary and father Eamonn Snr. Mrs Magee kept her hand placed on the coffin throughout the Mass.

In his homily, St Joseph’s Parish Priest Fr Kevin McGuckien spoke of the anguish he witnessed when he went to visit Eamonn Jnr’s parents.

“On Saturday evening I celebrated the Vigil Mass for the Feast of the Most Holy Trinity here in this church,” he said. “It was a celebration that reminded us of an important milestone in our lives – the day of our Baptism, that most sacred day when we began to share in the life of God, in the life of the Trinity, in the life of the Father, Son and Holy Spirit.  After that Vigil Mass I visited the parents of Eamonn Magee – Mary and Eamonn.  I witnessed the anguish of a mother and father who had in the early hours of that morning received the dreadful news that their son had been robbed of the very life that they had given him.

“Eamonn and Mary spoke about their son and expressed their deepest desire which was to hold Eamonn in their loving arms. That sentiment, which came from the very depths of their grief-stricken hearts, reminded me of the day ­– Sunday, June 20, 1993 – when Eamonn and Mary cradled their son in their arms and brought him to the Church of the Sacred Heart in North Belfast to be baptised, so that he would share in the life of God and inherit the dignity of being called an adopted son of God.

“Eamonn and Mary, his sister Áine, brothers Francis and Ethan, his grandmother Isobel and all his extended family and friends, you have many memories of how Eamonn touched your lives, so many of those precious memories are known only to you, you will treasure them in your hearts for the rest of your lives. We thank God for Eamonn’s life – a life that has touched the lives of so many in such a positive way.  Of course, it was a life that we would have wanted to continue for many more years, for Eamonn had so much more to achieve and to give from that deep reservoir of talent and goodness that he constantly tapped into during his 22 years.  Eamonn in his short life achieved so much.

“The love, care and support that he gave to you his family is immeasurable. Eamonn and Mary, you have spoken of your son in such affectionate terms: your blue- eyed boy; your right hand man; your ever-protective and loving son. Indeed, many in your family and in the community have spoken of Eamonn in similar terms. The staff of Eamonn’s former school, St Mary’s CBGS, have testified that Eamonn was a quiet, courteous and respectful student who progressed from his GCSEs into the senior school where he steadily grew in confidence and matured into an extremely pleasant and likeable young man and into someone who was well respected.  This maturing and growing in confidence was also to be found in his sporting endeavours. Following in the footsteps of his father he became a boxer and contributed so much to Irish boxing, he won many County, Ulster and All Ireland titles. Saturday would have marked the first anniversary of Eamonn becoming a professional boxer.”

He continued: “During this month he had been planning to run a half marathon and raise funds for the charity, Tiny Life.  Eamonn was supporting the sterling work which Tiny Life provides for pre-mature babies who are clinging to life. This is why it is so unfair, so unjust that he should have been denied his inalienable right to life. I’ve no doubt that one of the motivating factors for Eamonn running the half marathon was his much-loved nephew and Godson Cormac. Eamonn had experienced the joy that this child brought to his family and he wanted the families of premature babies to continue experiencing that same joy.

“Last June Eamonn began his professional career as a boxer and last September he also began third level education at the University of Ulster when he enrolled on the degree programme of Housing Management. All this reflects his aspiration to reach his full potential and take the necessary steps towards a brighter future.

“How ironic that in the darkness of the night that this young man with such a bright and promising future should be taken from us in such a cruel manner.”

During the Prayers of the Faithful, family and friends of Eamonn Jnr paid tribute to the emergency services who had tried to save Eamonn Jnr’s life and asked for prayers for all those who came to his assistance as he struggled for life.

In the Mass booklet, under a picture of Eamonn Jnr, the verse read: “His dad’s blue eyed boy, his mum’s right hand man, his two brothers’ bro, his sister’s gorgeous boy, A quiet, shy soul who touched everyone who came in contact with him. Cherished for his loving, caring, supportive, funny personality and for his passion for his life and the lives around him. Eamonn – The Main Man. Champion in everyone’s hearts.”

After the Requiem Mass Eamonn Jnr was laid to rest in the adjoining St Joseph’s cemetery.