Latest Brassneck play to celebrate 30 years of Féile an Phobail 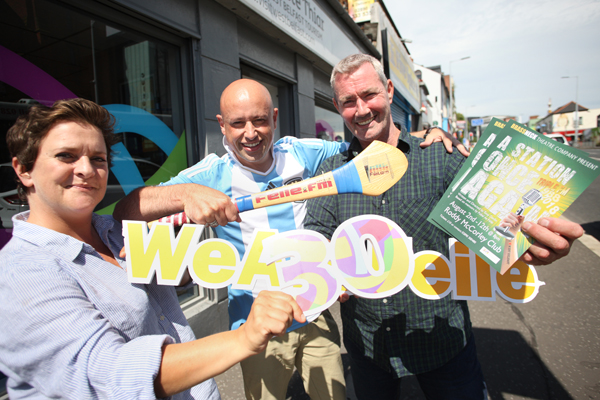 THIRTY years of Europe’s largest community festival, Féile an Phobail, are set to be condensed into an hour and a half as the Aisling Award winning Brassneck Theatre Company tunes into A Station Once.
The play will resurrect the heady summers of the past when the sound of Triple FM/Féile FM filled the airwaves and the story of Féile, its characters, successes will be told through the wryle nostalgic eyes of hosts Fra and Bridie.
“Féile came to me just before Christmas and asked if Brassneck would write and produce a play about the history of Féile – I said ‘Absolutely no way,’’’ explained Brassneck director Tony Devlin. “I thought it was too big a task but in the end sat down to try and write it – I got writer’s block straight away, but at the time Feargal Mac Ionnrachtaigh said he had been commissioned to compile an oral history of Féile so there were a lot of old stories and memories that he gave me access to. I read through them, listened to them and I knew I needed to find a hook so I decided, what if it was a radio broadcast going out on the old Triple FM radio station? What if it’s about people who are no longer with us, looking back?”
Tony continued: “The play starts off in limbo, God comes to our two protagonists, Fra and Bridie – who very much want to reach paradise and for them to get there they have to do a radio broadcast looking over 30 years of Féile for the people of West Belfast – which they agree to.
“The play starts off in 1988, all the characters are there, Teapot and Hector from up in Springhill, Danny Power and Deirdre McManus from Cultúrlann.”
Tony spoke of how his best memories of Féile were “all the community parties.” “My mates and I used to cherry pick which ones we’d go to. Beechmount had their own, Iveagh, you mightn’t have been from the area but you’d just gate crash it anyway,” he laughed. “It was a chance to get away from the bonfires, the riots at that time, Féile was and is a much more positive expression for the community of what we are about. When Féile started this wealth of talent was uncovered. Actors, playwrights, wall muralists, film makers, just look at what we have today, Europe’s biggest community festival.”
Brassneck stalwart Marty Maguire will play the role of Fra in the production. He told this reporter that despite leaving for the States in 1989 and spending 20 years there, “You always were kept up to date with what was happening during the festival back home.”
“This was the time before the internet, but people would always send over Andytown News clippings or post it over so you could see what was going on. I remember myself and Jo Donnelly were actually interviewed for Triple FM nine years ago when we were in Martin Lynch’s The Chronicles of Long Kesh.
“We were interviewed by Paul McCusker, now an SDLP Councillor for Oldpark, when we were heading up to Derry to perform. Everyone was going, ‘We heard you on the radio, we heard you on the radio,’ it was amazing.”
Jo Donnelly, who is set to take on the role of Bridie said: “I’m a country girl so I didn’t really have much of an idea on the festival but since working with Tony I’m getting so, so much information, it’s absolutely amazing. To see where Féile started and to what it is now 30 years on is incredible.”
Tony said that such is in the interest in the play that tickets are already selling fast with people wanting a slice of nostalgic theatre.
“Triple FM was the talk of your summer, it really was. It was our people’s voices, telling our stories. No-one was listening to Cool FM during this time – everyone was out their back listening to Féile FM. We hope that magic will be recreated for our audiences in August.”

A Station Once Again will be performed at the Roddy McCorley Club from August 2 until August 12. Tickets are priced at £10 and are available at the club or telephone 02890 300480.