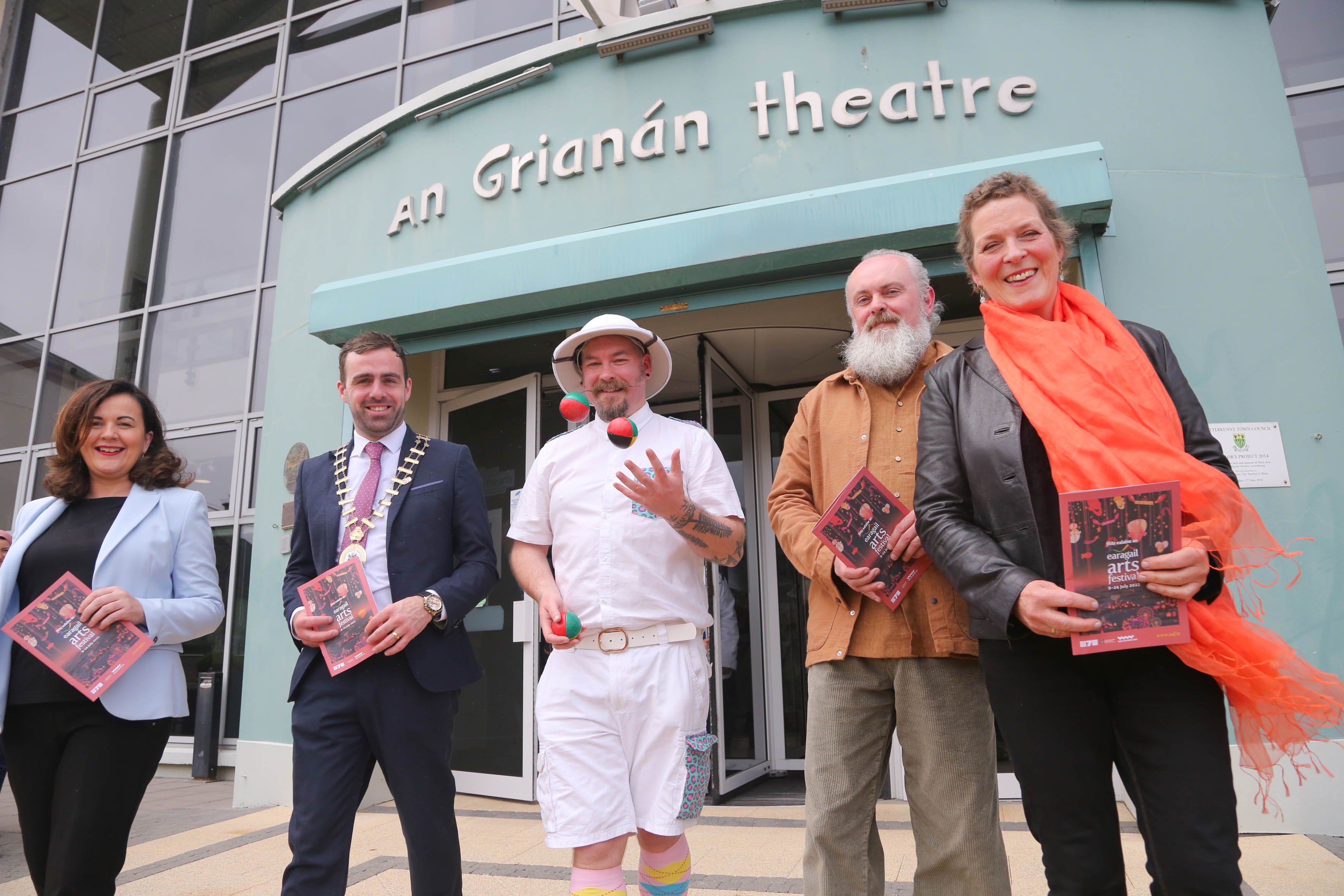 Earagail Arts Festival officially launched its 2022 programme of events at An Grianán Theatre, Letterkenny, on Saturday.

Making a welcome return to its full programme along the Wild Atlantic Way from 9 to 24 July, the line-up and brochure were officially launched by Cathaoirleach of Donegal County Council, Cllr Jack Murray.

Invited guests were also entertained by music by Clare Friel, Brid Harper and Róisín Harrigan of Na Sí Fiddlers and there was a special appearance by street performer, The Exotic Dr. Proctor.

With a family-orientated programme from the Gaeltacht islands off the West Donegal coast to Ireland’s most northern village Malin, Earagail Arts Festival has something for all ages. The festival features an expanded programme of circus and street arts performances, masterclasses and camps, with weekend circus hubs in Inishowen and East Donegal.

Marking the official opening, Cllr Murray celebrated the return of a full in-person programme to the Donegal festival. “After two years of very different festival formats, 2022 marks the return of Donegal’s largest celebration of culture and creativity and it is a major milestone as it is the 35th year of the festival.

“Though primarily a celebration of our vibrant culture, there is also a significant economic return through the festival.

“This is a festival that creates social cohesion, celebrating the creativity and diversity of a modern County Donegal.”

Traveller tinsmithing is an important part of the Traveller community’s culture and heritage and Ireland’s craft past.

Ciara Sugrue, Head of Festivals at Fáilte Ireland said: “Fáilte Ireland is pleased to support this year’s Earagail Arts Festival as it returns to County Donegal. Festivals such as this are a brilliant opportunity for visitors to experience what Ireland’s arts, heritage and culture have to offer to people of all interests and ages and offers a great opportunity to explore the best of Donegal and The Wild Atlantic Way.

“Festivals and events are a key component of Ireland’s tourism offering and they provide unique and compelling reasons for a visitor to choose a destination. They also have the ability to drive footfall for local businesses, supporting jobs and revenue generation.
“Festivals such as the Earagail Arts Festival play an important role in the recovery of the tourism sector for Donegal and its surrounding areas.”

CEO & Artistic Director of Earagail Arts Festival, Paul Brown added: “Over the past two years we’ve taken time to reflect and learn and take a new direction –we want to give you the opportunity to shape the festival of the future, to participate, to contribute and to create your own works of art.

“This year an expanded programme of circus and street arts performances, workshops and camps tours the county, with weekend circus hubs in Malin and Raphoe. VR and graffiti art projects, a rich and diverse music, drama and exhibitions programme, discussions and guided artist walks in the Donegal landscape, all celebrate the indigenous life, nature and culture of this magnificent part of Ireland.”

Acts appearing at events throughout the festival, which includes the Wild Atlantic Weekend on The Green in Malin, will be popular performers such as Tumble Circus, Fanzinis, Swarm, Baubo Theatre, The Adventures of Dr Proctor and much more.

There is something to cater for everyone at this year's @EaragailArts and this is the first in person festival since 2019.https://t.co/6ARg0DLgLB