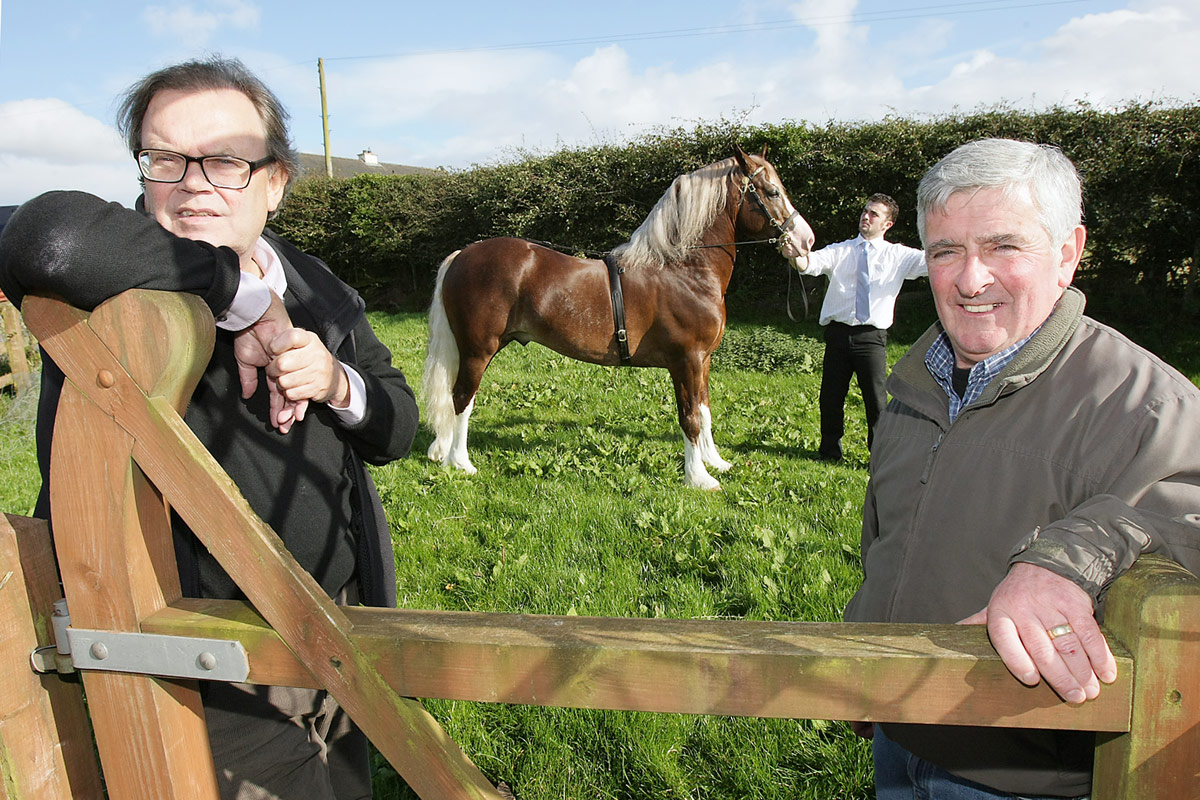 A LOCAL man who turned a lifelong passion for horses into a successful horse-breeding business is set to travel to Birmingham next week to compete in the Horse of the Year Show.

It’s described in equestrian circles as the ‘World’s Most Famous Horse Show’, and Joseph Cleland’s four-year-old Welsh cob stallion Budore Sir Percy is the only Irish qualifier in the event, which takes place in Birmingham’s NEC arena from October 4-9.

Speaking to the Andersonstown News ahead of next week’s competition, Joseph, who lives with his family at his stables in Hannahstown, said his interest in horses was sparked growing up as a boy in Cavendish Street.

“I’ve always loved horses from when I was young,” said Joseph.

“It’s almost like an addiction, like drink.  I’m a ‘horse-a-holic’.  I saw the end of the working horse era when I was younger.  Usually over beside us at Beechmount the gypsies used to come and they would have had hundreds of horses that used to run around the street.

“I always worked with horses any chance I could get, but I first owned one when I was 25, which was a Welsh cob called Victor.”

Joseph said he breeds Welsh cobs as he sees them as “the best small horse class”.

“They can grow up to the height of a large horse,” he said.

“They have a fiery temperament, a good step and the looks of an Arabian horse only they are better built. Once you see them in action there’s no better horse.”

Joseph has been breeding horses for 30 years.

“We have nearly 40 cobs at the moment.  We actually sell cobs over in Wales, but I’m not in it for that, I’m in it because I love horses.”

Joseph was keeping silent about  his chances at next week’s Horse of the Year Show, but he said he was “over the moon” that Budore Sir Percy was the only Irish qualifier.

“It’s classed as the greatest horse show in the world and everybody tries to get to that.  You’re up against all types of classes for the title,” he said.

“His father, Lord Norman, came third in the Horse of the Year Show in 2004 but he was a lot older than Sir Percy.

“I’d like to take this opportunity to thank Michael and Kevin Lagan from the Lagan group who have sponsored me to travel to Birmingham for next week’s competition.”

“You’ve got a whole range of talent existing in West Belfast and this is one more element of talent that this horse is bred by someone who was a neighbour of mine in Cavendish Street,” he said. “It reflects the talent that exists in multi-faceted ways in this part of the world.”