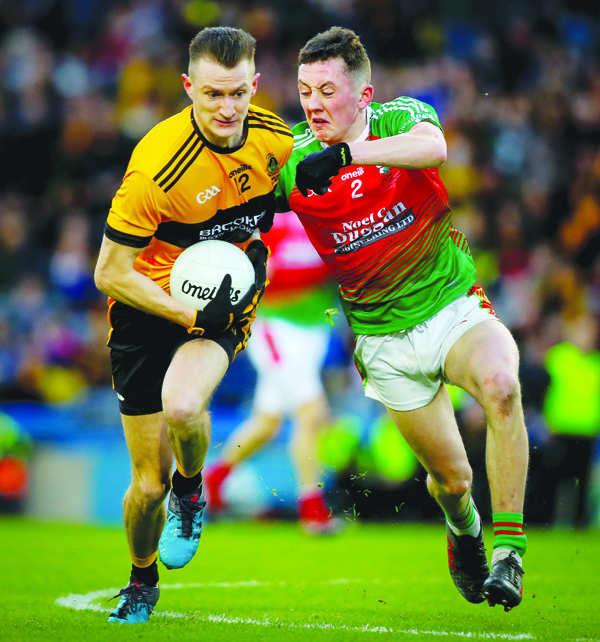 THE 2017 Championship finalists meet in the first league game of the 2019 as the new football season gets underway this weekend.

Lámh Dhearg host St John’s at Hannahstown on Saturday afternoon in what will be a repeat of the ’17 county final when the Red Hands edged a close decider by scoring two late points.

That decider was memorable for the fact that it pitted the Nugent family in opposition to each other with St John’s mentored by Paddy Nugent and Padraig playing goals, while Domnhall Nugent lined out for Lámh Dhearg following his high-profile transfer in 2016.

Ahead of the 2019 campaign, the former Antrim senior panellist has moved back to his home club, but is set to return to Hannahstown for Saturday’s league opener.

His switch adds another layer of intrigue to the fixture, but Declan Lynch insists it won’t be a distraction for either team.
“Domnhall is away back to St John’s and fair play to him,” said Lynch.

“As long as he is playing his football and he is happy, that’s the main thing.

“There is always a bit of added spice to that game, but it isn’t because of Domnhall going back. It is us against St John’s and that brings it own intensity.

“It is a good game to start off with. It is also a standalone fixture on Saturday, so there will probably be a good crowd at it. The teams know each other inside out at this stage. It will be good to get back on the pitch with the club as well and get stuck into it.”

Having bridged a 25-year gap from the last Championship in 1992 to win the 2017 title, Lámh Dhearg would have been disappointed with how their 2018 campaign ended.

After defeating Aghagallon in the first round, they were well beaten by eventual champions Cargin in their quarter-final replay at Corrigan Park last summer.

Lynch feels there are plenty of teams in with chances this year, including Lámh Dhearg.

“We’ve spoken about it and, I know we had a lot of injuries last year, but every team has injuries,” added Lynch.

“We conceded a last minute free against Cargin for them to get a replay and look what happened after that!

“Those are the small margins. There are five or six teams who are capable of winning the Championship this year and we are in the mix. St John’s are one of those teams as well.

“They’re showing that it is capable to be a dual club and they’ve a very good football panel and both teams will be expecting to start their season with a win.”

Lámh Dhearg remain without the services of Antrim star Conor Murray who suffered a cruciate injury against Offaly in the Qualifiers last summer.

Murray recently received the all-clear to resume full training, but is still some way off making his return.

St John’s boss Gearóid Adams, meanwhile, will be without Brian ‘Bam’ Neeson as the fixture clashes with Cliftonville’s Irish League game with Glentoran.

It is only seven weeks since the North Belfast outfit lined out against Kilcummin of Kerry in the All-Ireland Club IFC final at Croke Park.

The Antrim and Ulster champions were comprehensively beaten on the night, but they will take great heart from their remarkable journey.

Last season, they managed to retain their Division One status with something to spare.

However, they will be understrength for Sunday’s opener against Cargin with key duo Kristian Healy (groin) and Joe Maskey (back) both sidelined through injury, but Conor McAuley has recovered from the ankle injury which cut short his All-Ireland final.

Division Two winners and Intermediate runners-up Gort na Móna will be hoping to make a positive start to their season when they host West Belfast neighbours St Teresa’s on Sunday afternoon, while St Brigid’s also return to the top flight with a home clash with Aghagallon.

St Gall’s, meanwhile, will be aiming to put a bitterly disappointing 2018 season behind them when they travel to Ahoghill on Sunday.

The Milltown Row side looked destined to reach the county final until a last-gasp Tómas McCann goal gave Cargin an unlikely win in their epic semi-final meeting at Creggan.

Elsewhere, Rossa will be strongly fancied to make a swift return to the top flight following their relegation to Division Two last season.

Sean Fleming has taken over at the Shaws Road club and they host Aldergrove on Sunday with Paddy Nugent’s side also looking to secure a return to Division One.

In Division Three, there is a plethora of derby ties with Ardoyne hosting St Paul’s at The Cricky in the pick of the games.
St Malachy’s also take on familiar foes Éire Óg at Cherryvale with St Agnes’ facing Pearse’s at Woodlands.

O’Donnell’s and Laochra Loch Lao are both on the road and face Ballycastle and St Comgall’s respectively.