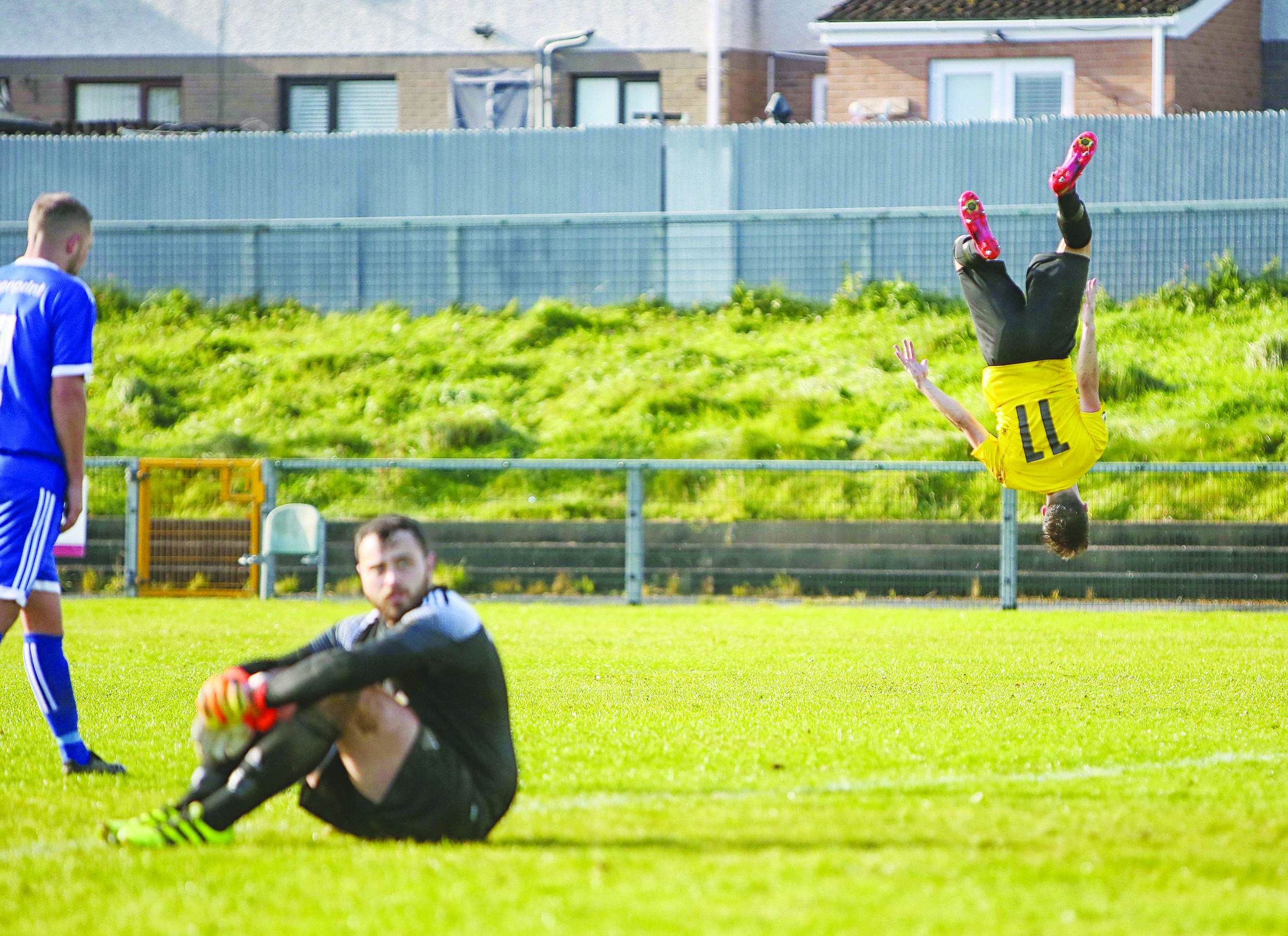 St James' Swifts would have been among the front-runners to celebrate winning the Ballymena League, but its cancellation could put a barrier between them and promotion Jim Corr

Last week’s decision to cancel the league after just two full rounds were played last Autumn was expected and came just days after the Northern Ireland Football League (NIFL) reached the same conclusion regarding the Championship and PIL – although no games were played in either of those leagues.

However, next season’s Premier Intermediate League was set to revert to a 12-team league following the withdrawal of Lurgan Celtic back in 2019.

Belfast Celtic and St James’ Swifts would have been among the front-runners to win the Ballymena League, but the cancellation of the league could put a barrier between them and the promotion berth.

The winners of the Ballymena and Provincial League are eligible to apply for promotion along with another regional league champions including the winners of the Mid-Ulster League and the Northern Amateur League.

Unless the criteria were altered, it would seem unlikely that either club would be permitted to make the step up to the Premier Intermediate League, although both clubs have indicated that they will apply to join the league before next month’s deadline.

“We are all gutted that the league has been cancelled after we weren’t given elite status,” said Johnston.

“We just have to get ready for next season and we are still hoping to look into taking that step up to the Premier Intermediate League if they decide to move from 11 teams to 12.

“I’m not sure what the criteria will be, but we are going to apply for it anyway. If we are lucky enough to be accepted, it would be great, but I’m sure plenty of other clubs will be interested as well.

“The fact that they just cancelled it was hard to take. We had played two games and everyone was getting changed in the stands and players were travelling separately. I think we were less of a risk because we would have less people coming to our games anyway.

“We were doing our best to try and play as many games as possible. But, unfortunately, without really giving us a chance, they pulled it.”

Application
Belfast Celtic will also make an application to play in the Premier Intermediate League having been relegated from the division in 2019 as Sport and Leisure Swifts.

Chairman James Gillen hopes the criteria set out will allow their application to progress and is open to the idea of a play-off between the eligible clubs from the various leagues.

“It could be that, because this season wasn’t played, they’ll continue with another 11-team league,” said Gillen.

“If it goes to a vote between the teams in the Premier Intermediate League, would they really vote to bring in the likes of Belfast Celtic, St James’ Swifts, or Crewe United?

“What they do is out of our hands. If there is a place up for grabs, we’ll do our best to take it.

“There are rumours about some sort of a play-off tournament between the teams who are eligible.

“However, the Mid-Ulster League hasn’t been declared null and void, so they could finish on a points-per-game basis and crown a champion. That’s another scenario to consider.

“We were the last team to be relegated from that league (as Sport and Leisure Swifts) in a season when a team pulled out (Lurgan Celtic). Had they withdrawn earlier, we wouldn’t have been relegated at all.”

Gillen is also of the opinion that Belfast Celtic won’t be playing again this season, despite being involved in the Irish Cup.

The competition was scaled down for this season with the four Intermediate Cup semi-finalists from last season joining the Irish Premiership and Championship teams along with the next four teams in the league pyramid.

However, the non-elite status of teams outside of the Irish Premiership forced the postponement of first round, scheduled for Saturday, January 9, and Gillen doesn’t see the competition being played in its current format.

“I don’t believe the Intermediate Cup will be played and I don’t think Intermediate teams will compete in the Irish Cup this year,” added Gillen.

“I think they’ll end up changing it so that only the 12 teams who are classed as elite will be playing for the Irish Cup. We just have to focus on next season. The boys were looking forward to getting back, but it is out of our control.

“Health and safety must come first – there is a pandemic going on and things have to be prioritised. Unfortunately, football is down the list so we’ll just have to build for next season. I know ‘Mackers’ (Stephen McAlorum) and Paddy Kelly will get the boys fit and ready for the new season and we’ll be back bigger and better for next year.”

Unfair
Those views are also shared by Johnston, who feels it would be completely unfair to ask teams to compete in the Irish Cup when only the Irish Premiership teams are currently playing.

“I’ve come to the conclusion that nothing else will be played this season and I think it would be really unfair to ask us to play those fixtures,” said Johnston.

“Obviously, we are in the same boat as Harland and Wolff Welders regarding the Irish Cup as they can’t play any games either.

“If we were to progress to play the likes of Cliftonville without any training, I think it would end up an absolute joke – we wouldn’t be giving ourselves a chance.

“I think they (The IFA) just need to be honest with teams and make the call on it and we’ll move on. The quicker they come to this decision, the better.”

The former Cliftonville star also has concerns about the immediate future of teams at junior and intermediate level.

The lack of sport at grassroots level is set to have a massive impact across the board and Johnston believes players need some form of clarity as to when they might be allowed back to training.

“A lot of boys have taken on delivery jobs on Saturdays and are enjoying that extra income,” said the St James’s boss.

“You would fear for next season a bit to be honest. Are those players going to want to come back? It could be tough to get players motivated again. Maybe people have got a wee routine now with their families and what not. It will be hard to get into that routine again and get them back to football. It is all up in the air.

“It is the same with kids – you have to feel for them. I’ve two children and they’ve gone from playing two or three nights a week to having nothing. They are six and seven and now they are busy playing the Playstation.

With so much uncertainty surrounding a return to action, Belfast Celtic chairman Gillen believes it is a good time to address other shortcomings in the game.

Glentoran manager Mick McDermott recently added his voice to the growing calls for local football to move to a summer season.

McDermott’s proposals were “perfectly sensible” according to Gillen, but he said there are unlikely to be acted upon and he also called on the Irish FA to scrap the ruling which gives Irish Premiership sides home advantage in the Irish Cup when playing against Intermediate sides.

“You only have to look at the reaction to Mick McDermott’s comments about summer football to see how football is run here,” stated Gillen.

“What he suggested was perfectly sensible, but the powers that be won’t consider it. This is how much respect is shown to Intermediate level teams - in the FA Cup in England, the Scottish Cup and the Welsh Cup, the first team out gets home advantage.

“Here, we were drawn at home to Carrick Rangers (in the Irish Cup) and the tie is automatically reversed.  We would have to go to Carrick, who are on a bit of an upsurge at the minute.

“We have a certificate to say our ground is of Intermediate standard. They’ll allow you into the Irish Cup, but only on the condition that, when the big boys come into the competition. you’ll lose home advantage. The logic of that is beyond me.”